Other dishes are quintessential on the Thanksgiving table, sure: turkey, stuffing, mashed potatoes. I consider Brussels sprouts essential, and some kind of cranberry preserve that has never seen a can must grace the table, too.

But pie – oh boy, that’s where the buck stops, isn’t it? Pumpkin pie is a classic, but apple and pecan have their ardent fans. To me, it’s all good – any good pie is good pie. And so the ideal filling for a Thanksgiving pie isn’t a hill I’m willing to die on, but I will shout loudly from the mountaintop about crust.

Cook’s Illustrated published a recipe for pie crust some years back that made the entire food-nerd world giggle with molecular excitement. They had discovered, you see, that replacing some of the water in a traditional pie crust with vodka led to pie crust perfection.

Pie makers have a love-hate relationship with water. Some H20 is necessary, of course, to keep the dough together. But flour + water = gluten, and gluten makes pastry tough. Tough pie crust is not good pie crust. Vodka in place of some of the water allows the necessary binding, but doesn’t activate gluten. Result: perfect flakey-yet-tender pie crust.

Cook’s Illustrated explains the science in their excellent food-nerd cookbook, The Science of Good Cooking, which contains this method for pie-crust perfection: “Gluten forms readily in water…. But gluten won’t form in alcohol. The ethyl alcohol in vodka and other liquors does not attach itself in the same way as water. Because of this, it does not hydrate the proteins, and therefore does not aid in gluten formation.”

Vodka is the spirit of choice because it’s neutral – in the oven the alcohol just evaporates away leaving, well, nothing. Cook’s Illustrated says that even more aggressive spirits do not add a particularly distinct flavor after baking. Still, unless I wanted to bring another flavor to the pie party, I would stick to vodka. And although I haven’t tried it, I think a bourbon crust for pumpkin pie would certainly not suck. If you do substitute another tipple, keep it 80 proof (40% alcohol by volume) so as to not throw off the alcohol-to-water ratio of your pie crust.

Although the vodka does add a substantial measure of insurance to this crust, all the standard pie-crust making rules still apply: keep everything as cold as possible, bring the crust together in a food processor, and let the dough rest (chilled, natch) before attempting to roll it out.

If you are in charge of pie this Thanksgiving, try this crust. I think you’ll like how it performs. 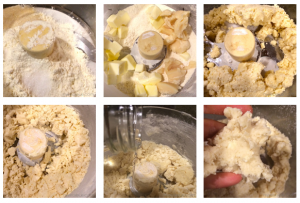 Dry ingredients (only 3/4 cup flour) get pulsed to blend in the food processor (top right) then the two fats – butter and lard – are added (top center). Substitute vegetable shortening or coconut oil if you must. Pulse until flour-fat mixture is fairly smooth (top -right), then add in the remaining flour (not shown) and pulse until mixture is crumbly (bottom left). Add vodka and ice water (bottom-center) and pulse just to combine (bottom-right).

Turn dough out onto a sheet of plastic wrap (top right), smooth into a disk  and wrap well (top center). After chilling (top-right), roll dough out on a floured surface – I prefer to roll onto a Sillpat or piece of parchment (bottom-left). To transfer dough to pie or tart pan, I like to fold dough in half (bottom-center), gently lift it into the pan and unfold (bottom-right).

That’s it! Super easy to work with pie crust that gives great results on the plate. That’s something to be thankful for!

What’s your Thanksgiving pie choice? I’m not going to throw down or anything, but I am a classic pumpkin pie girl, myself.

(These are affiliate links. Purchases made through these links cost you nothing extra but allow me to nerd out about using vodka as a cooking ingredient more often. Full financial disclosure here. Thanks for your support, guys.)

Cuisinart Food Processors. I have two. I used them both today, for real.

Silicon Baking Mats. Naked sheetpans get super bashful. Cover them up with silicone baking mats, the reusable version of parchment.

Silicon Rolling Pin. One Christmas about five years ago I worked a seasonal shift at Williams-Sonoma and funneled my entire paycheck back into quite a few cool kitchen gadgets at the employee discount rate. Hands down the best thing I bought was a silicon rolling pin. I love mine. It makes cookies, pie crust and more so much easier.