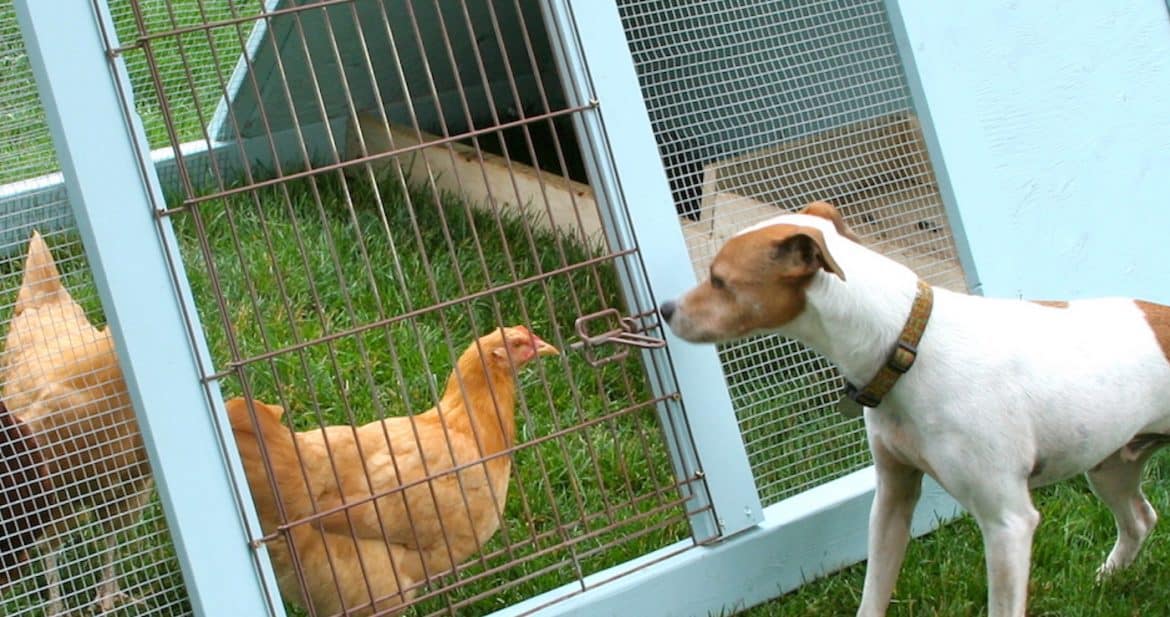 Once upon a time, I wanted backyard chickens. Fresh eggs, active composters, pseudo-pets. What’s not to love? I was an early 30-something DINK with a corporate job, a 1⁄4 acre plot just outside Seattle city limits and dreams of independent living.

So, I took a class at my local Tilth organization, I studied breeds, I repurposed my garden shed into a pretty damn cute coop using mostly recycled materials (naturally). I set up a brooder box in my laundry room and lovingly hand raised my chicks, naming them after carefully chosen pop stars. (There was Gaga, Shakira, Britney, etc.) I built a chicken tractor so my chickens and dogs could peacefully share space on the lawn. I was a tender-hearted urban chicken keeper

Beyonce turned out to be Jay-Z, and I shed a little tear when he had to go. Try as I might, I couldn’t eat that chicken without tasting the guilt in my mouth. I fed most of the resulting luscious risotto concoction to my dogs.

Fast forward. Like on your old school VCR, when you can still see the images going all squiggly and breakneck fast.

Fast forward through jobs and pregnancies. Through the reality of parenting small children. Through many rainy, rainy Seattle winters (and springs and falls). Through successful growing seasons and not so successful.

My first batch of pop star girls age out and are replaced. The new flock is less lovingly raised and not trained with mealworms to come when I call out with a high pitched “chook, chook, choooook.”

I put my eggs in the Sex-Link basket (literally and figuratively) to drastically reduce the odds I’ll have to deal with culling roosters. They are all female and vigorous egg layers, but mostly interested in eating and with limited “Chicken Personality.” (That’s a thing, I swear). 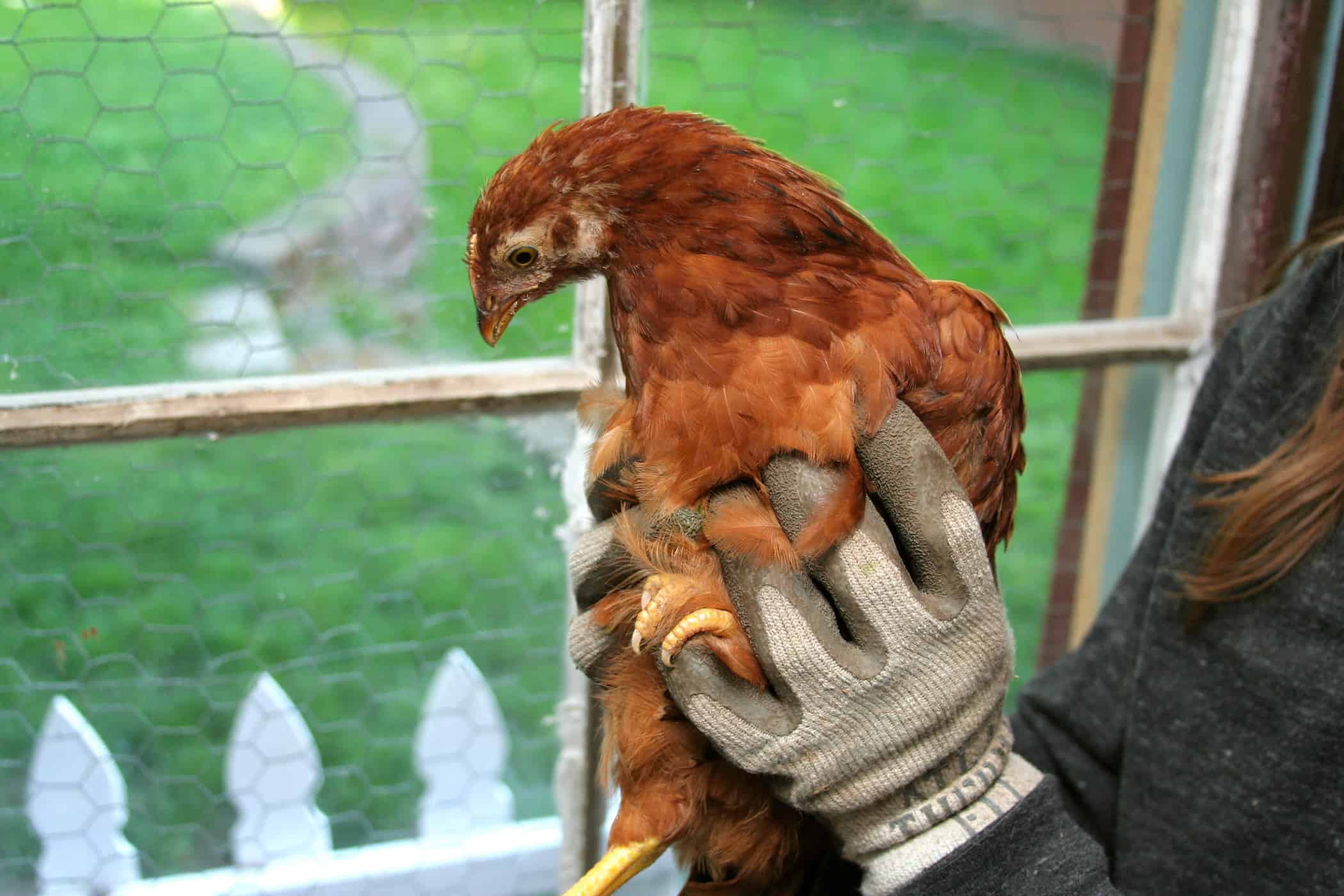 The new girls have no names.

Fast forward. Now I’ve got 2 kids under 5, 6 dogs and 8 chickens. I’ve definitely got this under control. Yeah, right.

Still, I don’t give up on my backyard flock! I strap my infant to my back for egg collection. I dutifully let the ladies free range, even as it becomes more and more of a shitshow to get everybody back up into the run.

My 4-year-old is a chicken wrangler, of sorts, but it’s hard to find the line between help and hindrance. I try not to accidentally whack him as I chase the hens around my backyard with a broom or a rake or a shovel like a crazy person.

I have no time to chase chickens!

All this would have been fine. Except for the rats.

Fast forward with me again. The 65-year-old garden shed starts to rot from moisture – internal and external. The skipping images on our screen start to look like scenes from the Secret of Nym, an onslaught of increasing numbers of rats.

For years we had chickens and no rats. Sure, I heard the stories. I knew the risks. I dutifully kept feed in locking metal bolt buckets. I only fed as much as the ladies would eat in 10-15 minutes. I took precautions, dammit! And I patted myself on the back for my rodent free success!

Then there was a shift. A mild winter, plus a neighbor’s demo project of an old outbuilding, very likely a historical rodent stronghold. Maybe they were always there and it was just a population explosion? Whatever the reason, the rats started their assault on our Chicken Fortress. And it never ceased.

There are two notable incidents. Ok maybe three. Well, three if I leave out the ones involving pellet guns and hatchets.

One involves the discovery of a mystery hole in the chicken coop wall. Mystery in that the hole just showed up one day. Right above the feeder. Huh. I stood there, pondering the hole. And then the insulation started to move. That was the beginning. We patched up the hole, liberally applied hardware cloth, pondered many theories about entry points. But hey, we’ve got this under control!

During egg collection, with a now-toddler on my back, a second discovery is made. Rats. on. the. ceiling. No, no not like externally, on the roof. But above my head, clinging, scurrying paw to disgusting paw in death defying parkour acrobatics, thwarting any efforts made to contain them.

Consider a flamethrower or possibly moving.

The third and final incident started like a victory, and ended in a realization. See, we had trouble trapping these fu… creatures. City rats are wise to your ways. They’ve got generations of imprinted knowledge about what is and is not a threat. They know how to avoid a traditional snap trap. And a bucket trap. We invested in an electronic arsenal. That worked until the extended family saw the victim. By way of a wake, they put the word out to the rest of the clan. After that we only caught slugs. Useful, but not the intended foe.

Enter The Black Mamba. Not her official name, but that’s what we called her. Lovingly even. During the course of this war, we sought non-traditional looking solutions, something this population hadn’t seen before. At under $5, Black Mamba was worth the risk. She paid off in spades.

When first deployed, the Mamba struck every 12 hours, sometimes more frequently, for 4 and a half days. We caught 9+ rats, during that time. Sometimes we pulled them out of her jaws while they were still warm. (BLECK!) After she sat empty for a full 24 hours, we took her inside for a week, then re-deployed her. Repeat performance. We added one to the arsenal in another location. Three more strikes. This was gratifying! And horrifying!

There’s an adage about if you’ve seen one rat, there’s really ten. So what if you have over 20 confirmed kills? It’s pretty easy math. Math I initially resisted. Maybe I don’t have this under control?

I stopped giving a shit. The chickens were on their own! I mean, not really. They were still fed and cleaned up after, of course. Mostly by my husband. I still ate the delicious eggs. But as we appeared to be losing the rat war, I retreated emotionally from my hens.

During a prior culling, a wonderful dear friend of mine had handled everything. We delivered a box of old but very much alive chickens. A few weeks later we picked up many quarts of golden chicken broth. It was honestly one of the nicest things anyone has ever done for me.

This time around, the timing wasn’t quite right for such an involved favor. With mixed emotions, I offered my flock free to good pot on a couple of local groups. It was time. Winter was coming, as they say. I had no desire to continue to do battle through another season where R.O.U.S.es were actively seeking cover.

To my surprise, my Chicken Ladies were all added (alive) to existing local flocks. No pot needed. We boxed them up, stacked them in front of the garage door and sent them on their way. I wasn’t even home when they were picked up. Bon voyage, gals!

So what do I do now?

I buy eggs. I’m a bit of a connoisseur, in fact. At first, I was sorely disappointed by the commercial landscape of flat, pale yolks. But, we’ve found our way. At about .36/egg (but no schlepping food or cleaning poop out of a water dish) it seems like a runaway deal.

I use my yard waste bin a heck of a lot more for food scraps. That makes me a little sad. Conversely, I’m also more inspired to eat those leftovers if I can’t recycle them into eggs via bottomless pit chickens.

We have plans to completely disassemble the garden shed this summer – with a backhoe. I’m sure our “neighbors” are still living out there, growing in number, plotting their revenge, even without a readily available food source. Turns out, I wouldn’t recommend a vintage garden shed with a root cellar as a chicken coop.

Our chicken season will come again. When my kids are older, with a new coop that is more resistant to attack (i.e., they can’t live in the walls). I’d love a few more Buff Orpingtons (hands down my favorites) to chat with over my backyard coffee in the mornings. 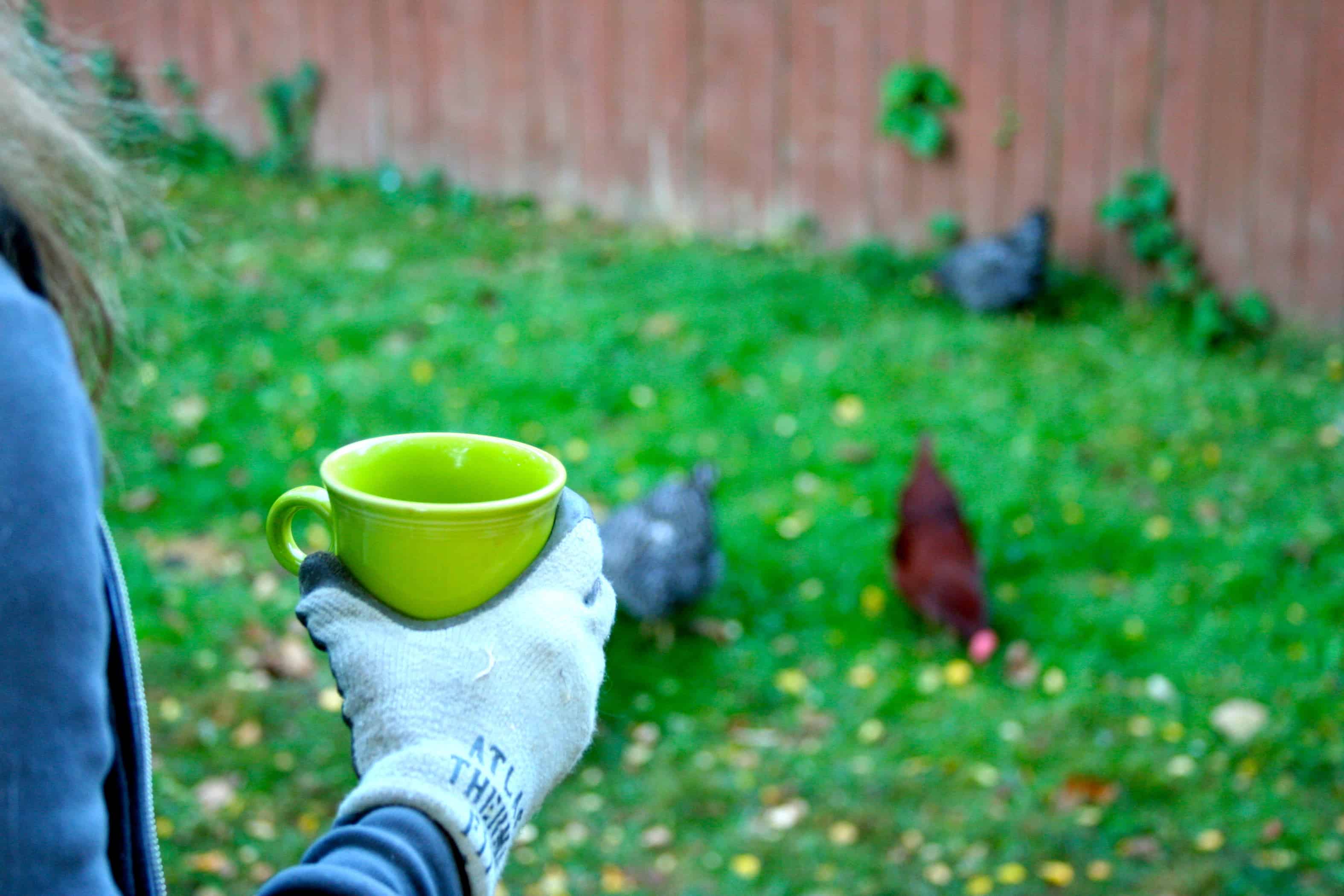 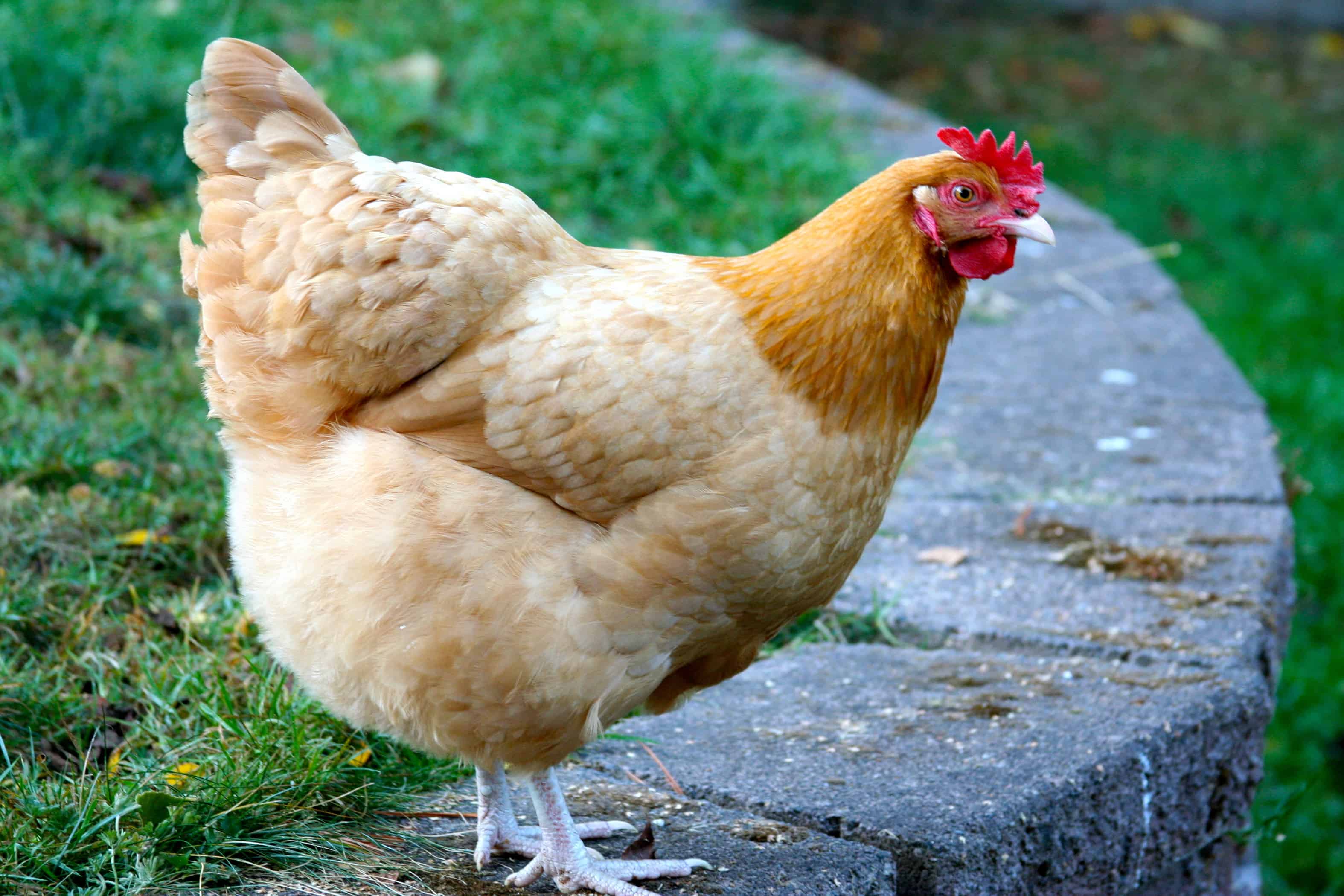 Until then, urban chicken-keeping was a useful exercise in animal husbandry, but one I do not regret letting go of. My homestead isn’t “failing” for lack of chickens. My 1⁄4 acre is less productive, sure. It is also more reflective of the realities of my life. While I’m sure the rats are still there, I don’t have to interact with them, or even worry about interacting with them, every day, multiple times per day.

That right there is worth some pale yolks.

Sarah Forrest is a mother of two "spirited" young boys and three unruly dogs, Corporate Refugee, runner, seller of all the things, and lover of words (not in that order), holding down the homestead spitting distance from Seattle city limits. She dabbles in side hustles, nerds out on personal finance and frugality and can often to be found hiding from children behind earbuds and coffee, while remaining just engaged enough to contain their destruction.