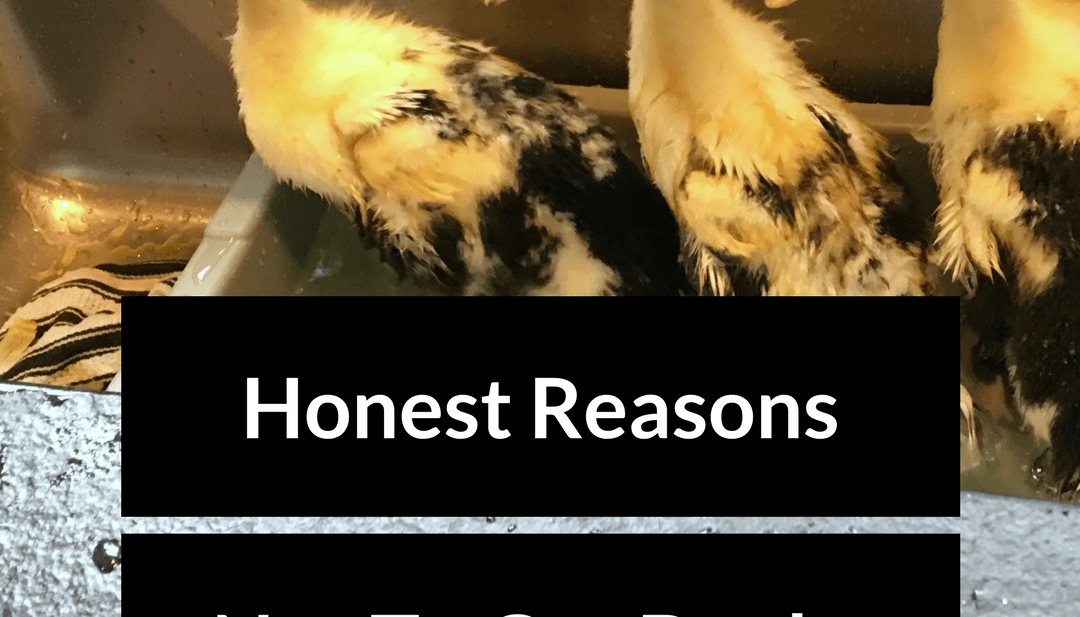 Are there any reasons not to get ducks? This is a serious question. I really want ducks. I’ve wanted ducks for the last 12 years but have never been able to jump into duck ownership, except for once when someone gave me a couple of ducklings and they disappeared…I don’t like to think about it.

I want easy-ish, I want to be able to keep them in the large chicken run and maybe give them their own house. I am a little worried about the duck penis thing…that was a life altering post. I don’t want to have to worry about managing a chicken flock with its own set of rules and a small duck flock with another set of rules. Should I just give up the dream or is it really as easy as you make it look?

Here’s my answer, extended from the comment I left for Tracey.

Yes. There are many reasons to not get ducks, especially in a situation like you’re describing, where you would be co-housing ducks with a flock of chickens.

The biggest issue is water. Ducks love it, need it, want it, and make a huge flipping mess with it. Chickens drink water but other than that, want nothing to do with it.

This difference is really apparent during  days of rain. In a downpour, the chickens sulk, hiding in the covered coop. The ducks pretty much do this.

Ducks must have access to water deep enough that they can dunk their heads, because they clean their bills by blowing water through their nostrils. They don’t technically need a pond or full-on swimming area to survive, but without a good bath every few days, ducks get dirty and more prone to external parasites like lice and mites. And, in my opinion, it’s just kinda mean not to give ducks access to something they can really swim in every couple days. 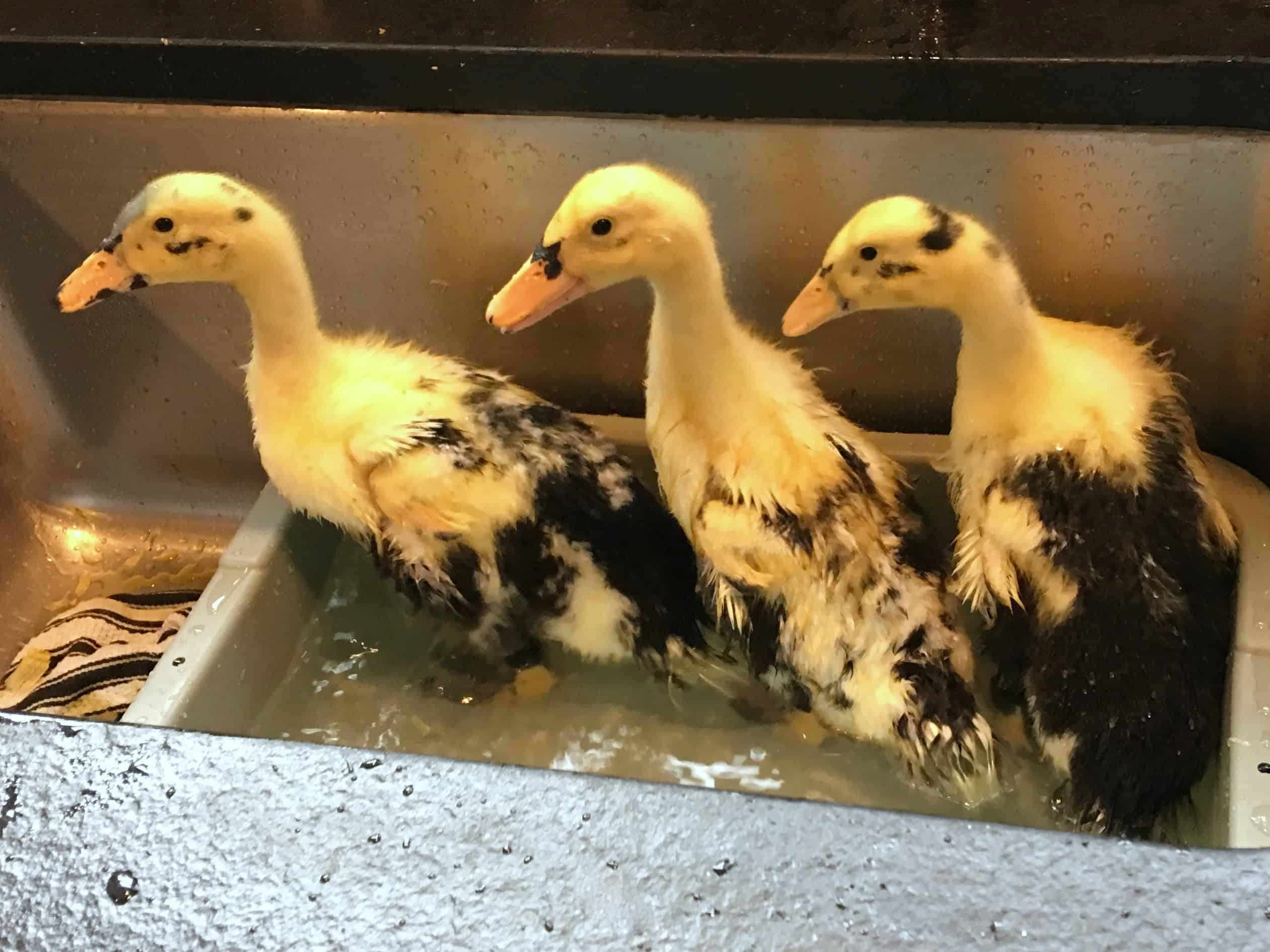 However, if you give the ducks all the water they want inside your coop and/or run area, they will turn everything they can into a muddy, mucky mess. That excess moisture can make your chickens unhealthy.

According to Backyard Chickens, muddy coops “can promote bumblefoot and internal parasites, [and make] it less easy and pleasant for chickens to get around. A muddy run looks awful, gives you brown bedraggled chickens, stinks to high heaven, and breeds a lot more flies than a dry run does.”

A possible solution is to get Muscovy ducks. This breed, unlike pretty much all the others, is not derived from Mallard ducks. It tolerates dry conditions much better than the mallard-derived breeds, so if you can’t provide swimming accommodations for your ducks, check out Muscovies.

Muscovies have a lot going for them in general – they are good mothers, better able to protect themselves than other ducks, and – if you roll this way – they are about the most delicious meat on the planet. But they aren’t very…duckish. They fly, roost in trees, have claws, and look….well…funny.

Bottom line: co-housing chickens and ducks is possible – but there will be water problems to manage.

Just don’t. They are assholes.

I’m writing this in spring, when the mating urge of many species – and certainly ducks – is at its peak. I hate the drake in our flock so much right now.

My favorite female has a bald neck from his mounting. He has drowned two females out of sheer incompetence during the conjugal act and, to add a sick insult to the literal injury, I think he’s shooting blanks. I’m not even supposed to have this duck. I gave him away and he came back with a sob story.

So Tracy – and people in a situation like Tracy’s – avoid male ducks. They are nothing but trouble.

Luckily, this problem isn’t a deal breaker – you can order sexed, female ducklings through some poultry houses.

Bottom line: male ducks are not worth the trouble unless you really want a self-sustaining homestead animal.

In my experience, free range ducks are pretty much a walking raccoon buffet. The domestic duck has absolutely no ability to protect itself from predators. It can’t peck or fly. Hell, it can’t even run. (Muscovies, as mentioned above, are a duck apart.)

A big, slow, juicy, waddling package of duck meat is a very tempting and easy prize for raccoons, or whatever your local flock marauder might be. I’ve never lost a chicken to a predator. I lost more ducks than I care to count, four of them – including my favorite – on one particularly bad Christmas Eve night.

To be fair, all predation stopped when our ducks moved in with the chickens. The lesson here is that ducks must be kept a secure, predator proof coop and locked up before dusk. They don’t return home to a coop with the same reliability as chickens, so if you free range ducks, give yourself plenty of time to herd them home before it gets dark.

Bottom line: assume any duck not locked very safely away before dark will become something’s dinner.

Duck poop sits on top of most coop litter. Then, big wide duck feet come along and trample it into a uniform coating of shit. It’s as terrible as it sounds. If you keep ducks, all by themselves, on wood shavings or straw, you get something like this: a bottom, thick layer of perfect, dry straw, a middle layer of damp straw, and an upper layer of poop. Like poop icing on straw cake.

It doesn’t take a lot of icing for things to get stinky, and fly-infested.

This is one area where I think co-housing ducks and chickens actually makes the problem a lot better. Chickens come along and scratch the litter up, which helps to break up and bury the bloppy duck poop so it never turns into poop icing.

We found going to a different coop litter made a huge difference in managing duck poop. We use compressed wood pellets that turn to sawdust when they get wet. They are designed as fuel for pellet stoves, but they are perfect for coop bedding with ducks. These are the wood pellets we use as coop litter now for our mixed flock of chickens and ducks. A 40 pound bag of these pellets is about $5 in my ‘hood. Purchase locally and stock up in the winter, when wood stove pellet fuel is widely available.

These pellets are a zillion times better than anything else I’ve ever used with ducks, including sand, straw, wood shavings, and heavier woodchips. The moisture in the poop gets absorbed as it hits the pellets, making the poop far more manageable. Switching to these pellets was a great move – I can’t recommend them enough for ducks or a mixed flock.

As a bonus, once the pellets get saw-dusty, the chickens really like them for dust-bathing. I toss a little diatomaceous earth down on the coop floor along with the pellets to help manage parasites. Works great.

Bottom line: there are ways to mitigate the poop problem, but it might require changing up a coop litter system that works perfectly well already for your chickens.

This is kinda a fake problem. I’m putting it in here because lists of 5 are better than lists of 4. Still, it’s worth knowing about. Laying ducks can eat chicken layer feed, but they will do better on a waterfowl-specific formulation with higher niacin and other key micronutrients.

If you can’t feed your birds separately (and in a co-housing situation, you can’t), either look for a “mixed flock” type feed, or offer niacin-rich nutritional yeast as a supplement for your ducks.

If your ducks have daily access to a true pasture situation, where they can eat lots of greens and slugs, additional supplementation of a basic layer feed designed for chickens shouldn’t be necessary.

Bottom line: you can’t assume any ol’ chicken feed will keep your ducks in tip-top shape, but this problem is fairly easy to mitigate.

So should you get ducks….I think ducks, when they are cared for as ducks, are wonderful. I love having them around. Personality wise, I prefer them to chickens. They are ideal as a Pacific Northwest poultry choice – they adore slugs and live for the the rain.

But co-housing ducks with chickens does bring up challenges. You can do it. Many people do. I’m doing it sorta successfully – which is to say that my chickens and ducks are doing fine together. (All current problems are the sole result of duck-on-duck violence.)

But don’t expect that you’ll be able to throw a couple ducks in with your chickens and everything to work perfectly right off the bat. There will be tweaking, and learning, and adjustment and maybe a screw-up or two. (Ducks and screwing – just…ugh, never mind.)

I am glad we have ducks. I like ducks more than I like chickens. But even in the ideal climate, I think ducks can be more challenging than chickens for the casual, backyard poultry-keeper.

Want To Ask Me A Question?

It’s easy, and I love it when you give me fun things to write about! Just follow these steps to make it easier for me to answer your question:

If your question has broad applicability and I can answer it, I’ll do my best to answer it in a post like this. 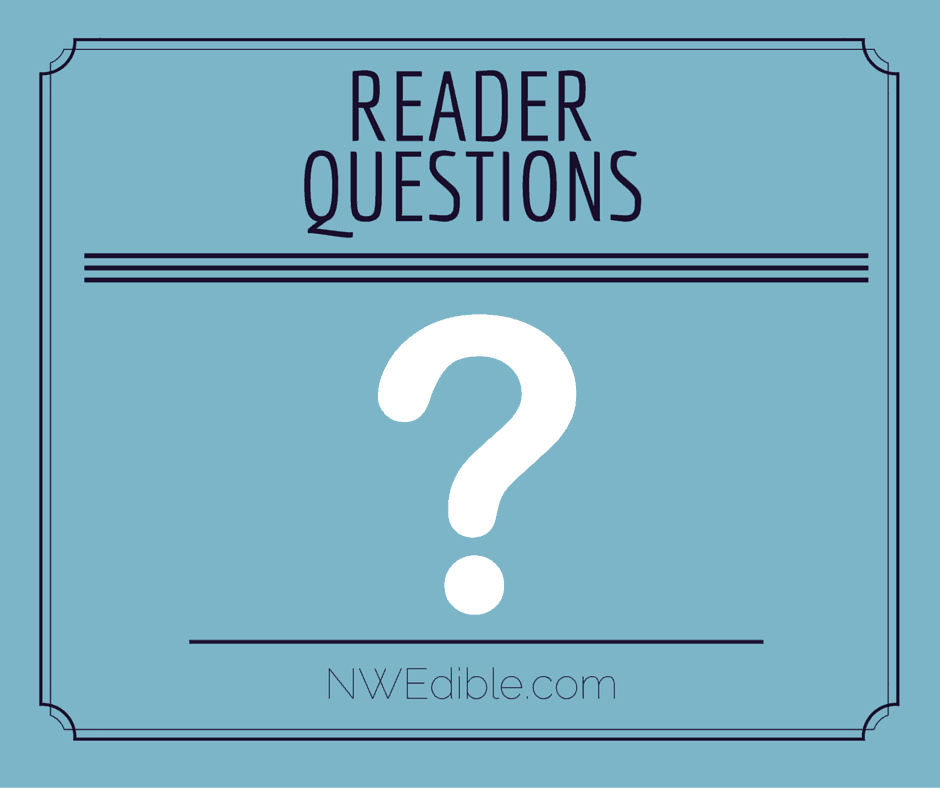