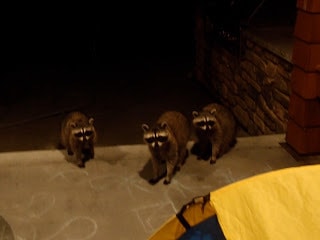 I’ve had some people ask if maybe it wasn’t a wee bit overkill to enclose our chicken coop in 1/2-inch mesh hardware cloth. That stuff is expensive, after all.
Here’s my answer: 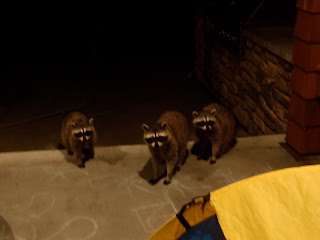 A few nights ago, as I was working on a blog post, Nick mindlessly said, “Hey, I’m going to go make sure the chickens are all locked up after the kids were playing out there.”
Then he opened the back door and made the kind of “brrrawwa!” noise a grown man makes as he jumps up and back into the house because he is unexpectedly sharing his suburban patio with three raccoons. 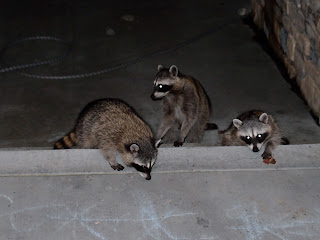 Later investigation revealed that our daughter had made a “Kitty Shelter” on the patio out of old fruit boxes, the mesh lid of our portable firepit and – wait for it – a cutting board last used to chop up ahi tuna and last seen a day earlier near the sink, waiting to be scrubbed. Eau de Thon is irresistible to raccoons, apparently.
Even without the the ahi attractant, we might have seen this raccoon family. We knew their mother. The family resemblance is unmistakable: same dark band over the eyes, same banded tail, same adorable-yet-terrifying contenance. Their mom used to come up to our house in broad daylight. Consultation with animal control informed us that diurnal activity from a raccoon was probably a sign she was looking for food for pups. 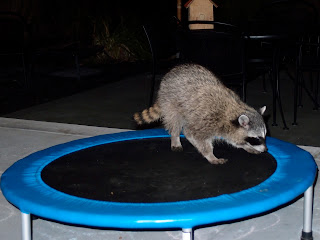 So now we have the second generation of raccoons that believes our cat’s food, served in the garage and accessible though the exterior cat door, is a fine nightly snack. Before you tell me that it is irresponsable to put cat food out where raccoons can get to it, you should know that these raccoons are entering through a high-tech, magnetically locked, outward-only swinging cat door.
Basically, our cat door is Mission Impossible: Cat Food and the raccoons are nocturnal Tom Cruise’s, using their thumbs and possibly some grappling equipment to defeat the locking mechanism. So far the only thing that has stopped their entrance into the garage is a 50-pound bag of concrete mix wedged against the inside of the cat door. 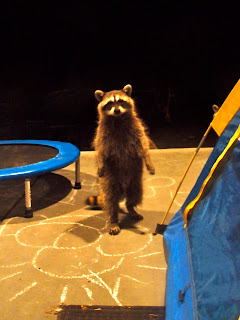 While these raccoons seem relatively benign, I would just as soon they not feel so welcome at my house. First, raccoons are notorious disease spreaders. We stay well clear of them but their feces can carry disease.
Second, while so far they haven’t tussled with the cats, there’s no proof that detente will last. Any one of them could rip up our cats (or our kids) pretty bad.
Third, cat food gets expensive when raccoons steal it by the bowlful. We’ve gone to feeding our cats only what they’ll eat in a day, and only during the day and the bulk of the cat food is stored inside the house, inaccessible to all but the humans. Still, raccoons were feasting from the trough of self-serve cat food for quite awhile before we realized they were breaking into our garage for their vittles, so that location is deep in their little furry heads as a good dining spot.
Luckily, since we invested in the total wire mesh lock-down of the coop, one concern – that everybody loves chicken, and that included raccoons – is minimized. 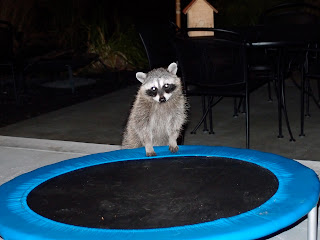 All in all we don’t have to contend with too much wildlife mayhem here. The squirrels and birds and rodentia haven’t caused much of a problem, and we don’t have deer or bear or larger game to worry about. Most of our encounters with nature are wonderful, actually – we live up the road from a bird sanctuary, so I’ve seen falcons and herons in the yard. The dragonflies that swarm the garden for a months or two in summer always make me do the happy dance, and even the wasps (they survived, by the way) have so far played nice.

What would you do about a raccoon family sharing your yard?