I think I’ve gone as far as I want to go with my homesteading right now, and I’m walking back certain decisions; remolding my tiny slice of earth (once again) to best suit our needs.

This is an interesting feeling for me – a reversal after 12 years now, of working towards ever-greater productivity. Slowly, over those dozen years, we managed to cram nearly every nook and cranny with edibles, convert too-shady sideyards into duck runs and clay-lined ponds, and (as of last fall) we completely eliminated the lawn.

This year? Call it going backwards – I’m filling in the duck pond and replanting the eco-lawn.

There’s this concept called the Pareto Principle – also known as the 80-20 rule – that basically says, for all manner of things, 80% of the effects come from 20% of the causes.

A few examples of the Pareto Principle you may have run across:

Interestingly, Pareto himself was a gardener who developed his principle when he observed that that 20% of the peapods in his garden contained 80% of the peas.

I’m spending a lot of time right now asking myself how to apply the 80 – 20 rule to my own domestic sphere – how to get 80 percent of the results for 20 percent of the work and focus on those things that are most rewarding.

I see permaculture, and in particular perennial plantings, as a major way to achieve this. Last year, for example, I literally had more plums than I knew what to do with. Those plums just kinda showed up and begged the whole neighborhood to eat them, so a very good return on time investment.

To this end, three of my 17 raised beds have been converted into a loose hedge of perennial berries – blueberries and currants and gooseberries. That’s three beds not available for annual vegetables, but also three beds I don’t have to worry about planning, planting, and maintaining to the same degree.

But the biggest physical change to the homestead as we look around with our 80-20 goggles on is the duck pond. Yup, that idea was not a winner. 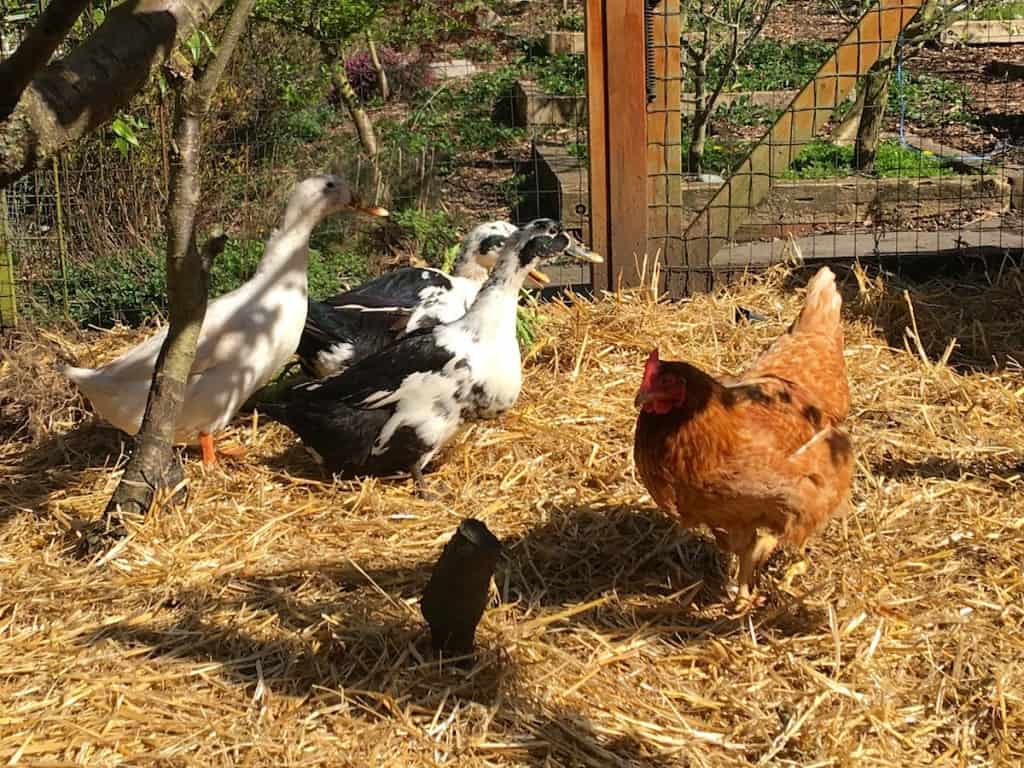 Spoiler alert: the ducks and chickens have moved in together.

We started with an adorable little puddle-pond all thickly lined with bentonite clay. It worked – in the sense that it held water and it kept our two (eventually three) ducks happy enough, and with an insane filtration system, it stayed moderately clear. My puddle-pond was briefly even semi-famous!

Well, those three ducks soon became more, so we expanded the pond all the way across the shady side of our upper yard. This kept a gaggle of growing ducks and ducklings happy, but very quickly we began to see pond-side erosion.

A duck’s mission in life is to swim around a pond and shove her bill into the mud at the pond edges looking for worms and slug eggs and stuff. It was obvious to me as early as last fall that my duck pond edge and pondside plant growth was not capable of recovering from the destructive power of our ducks. They managed to modify the pond edges with their dabbling and undercut areas of support for various trees and perennial plants.

The ducks were super happy. I was not.

Between the worrying erosion, the effort to maintain the pond and the filter, and dealing with all the poop that just sorta happened as the ducks walked back and forth across our back patio to get to their pond, duck management quickly became a thankless task. The effort-to-reward ratio was all backwards, even accounting for how adorable ducks are. Ducks were taking 80 percent of the effort, but giving 20 percent (or less!) of the reward. Pareto was not on our side.

This winter our duck flock was sitting pretty at 8 ducks, including a handsome drake we hoped would help improve the genetics of the flock. Then, a rather horrible raccoon attack on Christmas Eve took our duck count to 5, all females.

Without a male in the flock, we lost the capacity for a sustaining homestead animal. But the problem, as the permies say, is the solution – and lacking a male, we gained the ability to co-house our ducks and chickens. (You may recall that boy ducks can be quite rapey and aggressive, which is why we had kept the flocks separate.)

We’ve moved the lady ducks in with the chickens, drained the pond, scraped out the bigger blobs of clay, and have begun the process of filling in the pond (“the pit” we call it now) with anything compostable we can get our hands on. If it’ll rot, it goes in the pit.

The ducks are fine – they miss their pond, but they get big tubs of fresh water, and soon we’ll incorporate a hard sided, easily cleanable stock tank into the yard to give them back a proper bathing area. In the meantime, co-housing the birds has gone a long way to streamline poultry maintenance. Instead of two food areas to keep up, two watering areas to fill, two coops to clean – it’s all combined. Manure is more manageable, too, and my patio stays cleaner.

So, all good, right?

The Weird Thing About Change

Well, what’s really struck me is how much navel-gazing introspection it took to be okay with this roll-back, with putting the breaks on our ever-expanding suburban farm. What I’ve described in a few paragraphs with these ducks was a multi-month process of homestead analysis. I think a lot of this for me personally stems from outside expectations about who I am and what I’m all about.

But having made the decision to downsize, I feel a relief that’s just wonderful. It’s like, “yeah, I don’t have to stick with something that isn’t working. I can just change it. And that’s ok.”

In permaculture, there’s a lot of talk about systems thinking – putting together the pieces of the puzzle in an optimum way.

When a system really works, it’s synergy. But when it doesn’t, it’s drudgery. Sometimes I forget that I, too, am one of the pieces – at least as important as (dare I say) one of my ducks – so these systems have to work for me, too.

I bring this up because you may find that parts of your own homestead – or even your own life – are just not working for you. You might even wake up one day and find that a life that used to fit like a glove is starting to rub you the wrong way, like a too-tight pair of shoes.

Maybe you’ll need to do something big: sell a home, say goodbye to a bad habit, quit a job or leave an unhealthy relationship. Or maybe the changes will be so small only you will know their true importance: getting up the courage to say no to a pushy friend, taking the time to exercise, decluttering, stepping back from workplace gossip. Maybe it’ll be as simple as moving some ducks around and filling in a backyard pit.

The point I’d like to make is that if something in your system isn’t working, you can change it.

I know it’s not that simple. Not every problem can be solved with a shovel (though I can think of a few that certainly could be!) Often change is damned hard, and I’m not trying to minimize that at all. But sometimes things are hard – or seem hard – because we hang on to this idea of how something should be, or how we want it to be, instead of just accepting it for how it is. I had to accept that this entire duck pond idea was basically a boondoggle, and that it was my boondoggle.

My neighbor leaned over the fence the other day as I was shoveling dirt into the pit: “Betcha feel pretty bad about all that work you did making that pond, huh?”

“Nah,” I answered, “It was just an experiment that didn’t work out. We’re gonna try something else for while.”

And that was the truth.