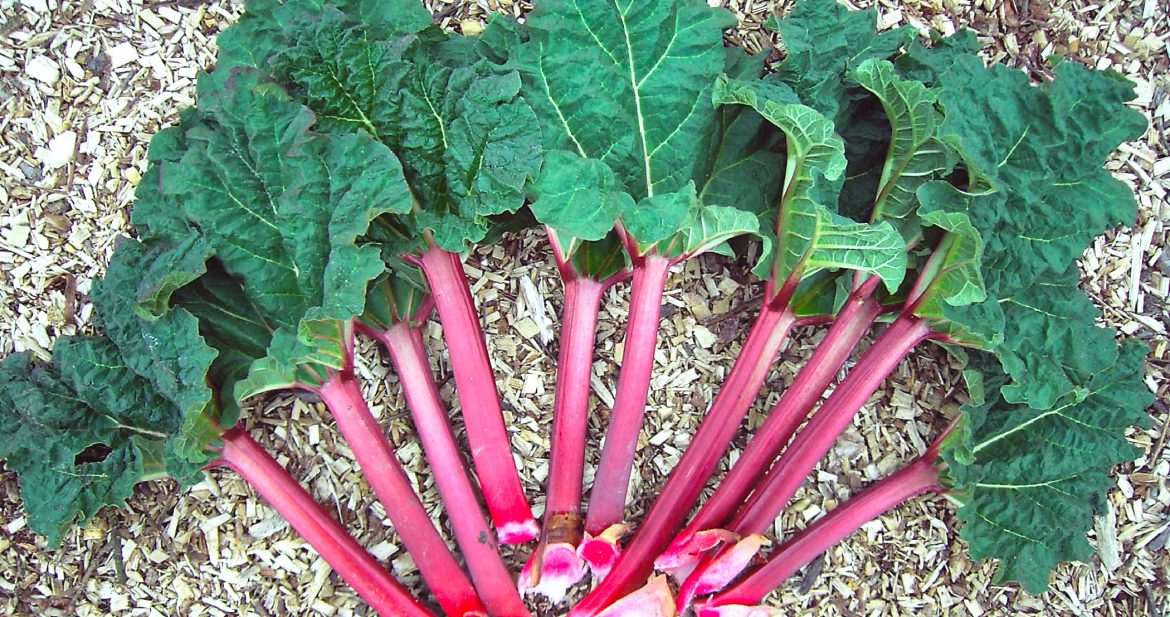 Did you know Washington State is the leading commercial producer of rhubarb in the United States?  It grows really well here. Sometimes it grows so well that it’s a little intimidating.

Such was the case with Audrey the Giant Rhubarb of Ballard.  Our best friends moved into a great 1950s house near Ballard a few years ago and inherited a rhubarb plant that was clearly original to the property.  It had not been maintained, divided, or cared for in any way, and had absolutely thrived on the neglect.  When I saw Audrey for the first time he was at least 8 feet across, with thick prickly leaves nearing 2 feet across.  Had Audrey been in a damper location, one would be forgiven for wondering if he was a sport of gunnera.

Now, to be fair, the foliage on any rhubarb plant is not the most delightful to behold (nor, coincidentally, to eat: the leaves are toxic).  It’s the pretty pink and red stems that really make the plant.  So our friends moved in and saw this huge, horrible ugly plant that took up a sizable piece of their garden real estate.  Being neither gardeners nor cooks, they had no idea how many wonderful crisps and pies were hiding behind those huge ugly leaves.

With undisguised distain, they told me that I was welcome to as much of Audrey as I could carry, and mentioned that it would be terrific if I could figure out some way to actually, you know, take Audrey.   Away.  Completely.  So that is how I learned the wrong way to divide a giant, ancient rhubarb plant.

The first thing I did wrong was agree to take the plant in the height of summer when Audrey was in seed and I was 7 months pregnant.  The second thing I did wrong was to not come prepared with a pick-mattock or a chainsaw or a saw z-all, any of which would have been better for dividing this monster than the puny shovels we had with us.

The crown on Audrey was probably 16″ across and hard like wood.  The four of us, each armed with our shovels, waded in, tearing precious stalks aside to get to the heart of the plant. I was determined to dig down and grab the roots. But as far as we dug, we found no roots. There was only this huge, ever-enlarging crown. Everyone looked to me for guidance, as if I should know everything about plants that apparently don’t grow roots.  I was stumped, I had never divided rhubarb before.

Improvising, I suggested our next move should be to pry chunks of the crown away using two shovels held back-to-back as a wedge.  This was more successful, and we managed to wrench several large battered chunks of crown away from the main plant.  They each had a few sad stalks clinging to them.  We must have been more successful than it felt from the midst of the battle, because we filled two large black plastic bags with the crown divisions and drove home.

As we looked back at Audrey, it occurred to me that for all our hours of attempted horticide, very little about the profile of the plant had changed. Knowing that we had two bags of it in our car and it still looked enormous should give you some idea of how established this thing was.

My third major mistake was unloading the black plastic bags from the car into a hidden corner of my garage and getting caught up in other life-type things for the better part of a month.  When I “re-discovered” the baby Audrey pieces I was hit with a vague horrible guilt.  Opening up the bag I was sure I would be looking at compost in the making.  In part, I was.  Some of the crown pieces had started to get slimy and gross, but for the most part what I saw was new growth.  Dozens of blanched, pale leaved rhubard stalks were shooting up from the crown divisions.

I hastened my little survivors out to the garden, whispering apologies the whole while and promising to take good care of them forevermore since they clearly showed such fighting spirit.  “Who’s my good rhubarb plant?  Yes, you’re my good rhubarb plant!  Who’s going to get lots of water?  Yes, you are!” (In my defense, at this point I was 8 months pregnant and the hormones may have clouded my relationship to the plant.)

I planted the best of the crown divisions in a row in the dappled shade of a plum tree that’s slated to come out.  I gave them the water I promised, and within a few weeks new little leaves were popping up above the soil.  It was like a miracle of rebirth.

I’m eagerly awaiting the first rhubarb shoots this spring.  Even though I know it’s far too early, I look at the spot where the rhubarb will come up – if it comes up – and say a little hopeful cheer for it’s survival.   If my baby Audrey’s do come up this Spring,  I won’t harvest any spears.  They’ve had a hard year and  need all their energy to go into root development (or perhaps crown development?).

It’s amazing to me that the maligned, overgrown monster in my friends yard – a seemingly impenetrable and undefeatable plant – could give me these little gentle babies who need extra care and extra love to help them overcome my terrible transplant job.  I guess it just goes to show that lots of nurture up front is easier than trying to make amends for a lack of care later on.

It all makes me glad I just had to give birth to my kids; can you imagine how much harder it would be to divide and transplant them?

Previous Post: « Yogurt Making: How To Add Some Culture To Your Day
Next Post: Garden Inventory: February 2011 »