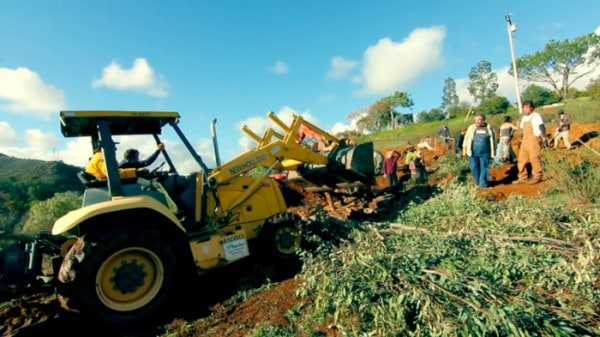 You guys probably know that the half-ass hugelkultur beds I built a few years ago rock my world. They have been super productive.

In fact, I like this permaculture bed-building technique so much that in a recent re-build of some of my old traditional raised beds, I experimented with making a normal raised beds into “secret” hugelkultur raised bed! There’s a whole post on that coming up. My hugelkultur beds are way smaller than these.

But in the meantime I wanted to let all my fellow Permie-curious and hugel-loving readers know that my friend Paul (you may remember him as the guy behind those Permaculture Playing Cards I gave away several months ago) from Permies.com is running a Kickstarter campaign to fund a 3 DVD video set called World Domination Gardening.

You can watch the Kickstarter video:

“World Domination?” You might be thinking, “Isn’t that kinda….like…forceful for a bunch of hippie gardener types?”

And the answer would be, absolutely! And that is classic Paul. He doesn’t just want to create sustainable, beyond-organic gardens that produce crazy amounts of food in unlikely and superficially difficult growing areas (like the desert, or the Alps). He wants a world where the ecological stewardship of permaculture farmers is economically rewarded and made viable on a universal scale.

Basically, he wants to change the freaking world one hugelkultur mound and chicken paddock and fruit tree guild at a time. Paul thinks on a pretty big scale. I maintain that this is because he is a ridiculously tall man-giant, and can’t help it: larger-than-life is just normal for him.

As you might expect, this 3 DVD set covers big, permaculture land shaping techniques like hugelkultur, berms and swales and natural pond building without a liner. A lot of the stuff in those DVDs is for folks on acreage – they use an excavator, not a shovel, to move dirt around.

Large scale – are you seeing a theme, here?

I wanna drive an excavator! Who’s with me?

But for those of us who aren’t going to be putting a backhoe in our backyard any time soon, Paul’s also putting together a 15-minute micro documentary all about hugelkultur gardening that talks about to modify microclimates, build soil and plant diversity and how permaculture differs from organic methodology.

The mini-video is the thing I’m most excited about because it’s most relevant to my urban situation, and it’s the Kickstarter “prize” for anyone who donates a dollar (or more) to the DVD Kickstarter. I’m gonna throw my dollar in the pot to get the chance to learn more about hugelkultur and climate hacking, and I thought some of you guys might want to as well. A buck for World Domination seems pretty reasonable.

And should you feel the need to divest yourself of more money, there are lots of levels of support for this Kickstarter with prizes you can compare here.

Check out the World Domination Gardening Kickstarter and see if it’s your brand of crazy. And if you are perma-curious, definitely pop over to Permies.com, where a ton of knowledgeable people geek out about the many facets of permaculture all day long.

Now, seriously, hands up – who wants to drive an excavator?