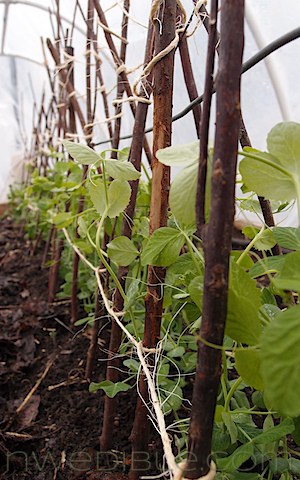 Last year I wrote the March 2011 To Do list and there was snow on the ground. This year? Yeah…you guessed it! But, hey, ignore the snow dusting the ground right now – the fact is, March is here, spring is coming and we gardeners can feel it. Here’s what Maritime Northwest gardeners should be doing this month. If you want to plan with the big picture in mind, download the Year Round Vegetable Planting Guide for free in the Downloadables section.

If you haven’t ordered your seed potatoes yet, don’t delay – local potato specialist Irish Eyes Garden Seed is already out of many popular varieties.

Sow Indoors:
If you are new to starting your own seeds you might want to check out my three-part Seed Starting 101 series: Key Components For Healthy Seedlings, A Step-by-Step Visual Guide To Growing Seedlings At Home, and Up-Potting.

Sow & Plant Outside
Fruit & Perennials:
As long as the ground isn’t frozen or waterlogged, bare root or potted fruiting trees, bushes and perennials can be planted out. The sooner you can get them in the better.

Vegetables & Annuals:
Remember that any veggie sown or transplanted out in March will be happier and give better results under a vented cloche kept in place through May. Make sure to prevent heat build-up by venting during the day, especially if it’s sunny! Also keep the ground moist enough to assist germination.

The goal of almost any vegetable that’s survived an entire growing season and gone through winter at this point is to make seed as soon as is reasonable. March is the last month you should expect to be able to harvest from your 2011 crops, as the longer, warmer days of April will send pretty much everything to bolt. If your cole crops make flowers and you can possibly leave them in the ground, please do so – bees and other beneficial pollinators love the simple yellow brassica flowers and will swarm to them on warmish days when little else is in bloom. Let those brassicas go to seed and, as a bonus, you may get some tasty mystery-kale-type self-sown starts popping up around your yard. I grew a whole bed of tasty self sown Russian Red (ish) kale last year that way, and gave another bed worth of starts to my neighbor.

Previous Post: « What's Next? The Anti-Inflammation Challenge Wrap-Up
Next Post: 7 Ways To Save Money On Seeds – Without Saving Seeds »