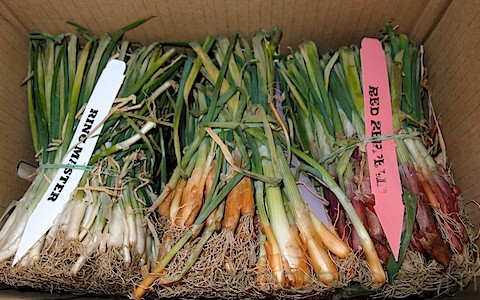 Vegetable growing can be a great way to save money on food, but it can also be a dang expensive hobby in its own right.

One of the biggest expenses edible gardeners run into is the cost of seeds. If you’ve been at this for awhile, you’ve noticed that the cost of seeds in the past few years has gone through the roof. There’s a few reasons for this, but the biggest is simple economics: demand for edible seeds is way up because vegetable gardening has skyrocketed during the recession. More veggie gardeners is a great thing, but that’s cold comfort when you’re looking at a $130 seed bill.

The fastest way to cut down how much you spend on seeds is to save your own, but let’s say you’re not quite ready to get into that yet. (I’m barely ready to get into that for much beyond peas and beans, and I’ve been growing vegetables for eight years, so I understand the hesitation on the part of new gardeners.)

Different seedhouses have different policies on shipping. Territorial has a flat rate shipping charge regardless of how much you order, so if I’m ordering from them I’ll order my entire years seed needs, including garlic, potatoes or onions, in one go. Garlic may not be shipped to me for 7 or 8 months after I placed my order, but when it is I won’t pay any additional shipping. 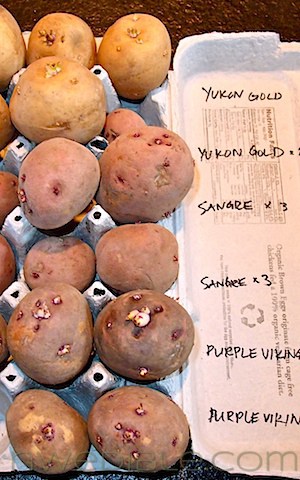 Yeah, but how much did those cost with shipping?

Seed companies will often send out customer appreciation coupons for 10% off or Free Shipping or other bonuses. These codes tend to propagate around the internet and sometimes you can snag a good deal for the cost of 3 minutes of web searching. I recently spent far too long optimizing an order to Johnny’s to come in within a certain shipping tier, then did a coupon code web search and found a discount code for free shipping!

See, you're not the first person to Google for discounts.

I buy onion plants and adore using them over seeds or sets, but they are spendy. I was buying my onion plants from Territorial (because of the flat rate shipping and regional focus) but I noticed that some of the onion plants they were selling in mixed bunches were not offered individually. This struck me as a bit odd, so I did some research and discovered that onion plants are pretty much all Southern grown and that Territorial was acting as a re-seller. 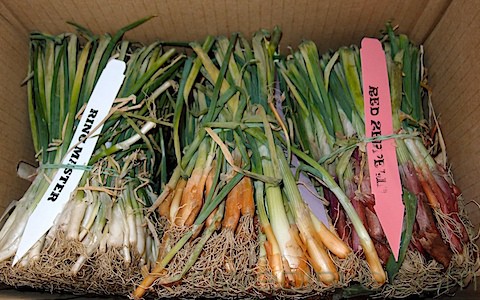 Direct from the grower - for less?

I found a major onion plant supplier in Texas (in fact, I would bet they supply Territorial!) who sells direct to gardeners and ships out the same onion plants for less money. Want the numbers? Four bunches of onions through Territorial would cost me $59.80 plus shipping; four bunches through Dixondale is $23 – and that includes shipping. I still love Territorial and buy a ton of their seeds, but sometimes it really does pay to shop around.

The vast majority of seed packets contain far more seeds than you will use in a season. A one-gram packet of cabbage seed contains around 300 seeds. Were you planning on growing 300 cabbages this year? No, me neither. If you are still figuring out which varieties you like and which perform well in your area, having a few seeds of many varieties is better than having thousands of a single proven winner. 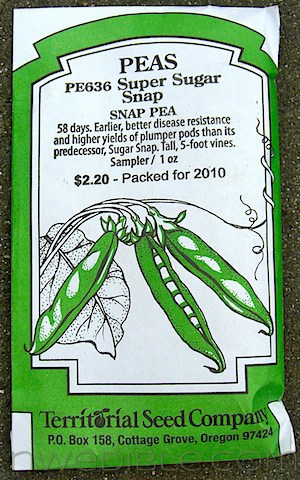 Long on peas but low on peppers? Try seed-swapping.

If you have a friend who is also into gardening, sit down with her and coordinate your seed order. If your desired varieties overlap, you can split seed packets right down the middle. You’ll still have more seeds than you have room to grow. A variation on this concept is to get together with your gardening friends and try seed swapping instead of buying this year. Most gardeners who’ve been growing for awhile have a lot of seed. If you’re out of tomatoes but long on Brussels sprouts, I bet you can find a friend who’s interesting in trading.

Can’t decide on a single variety of broccoli, peppers or lettuce? Mixes and variety packs are very popular and common. Try a packet with four types of lettuce and see which one you like best. For the cost of one packet, you get the variety of four. 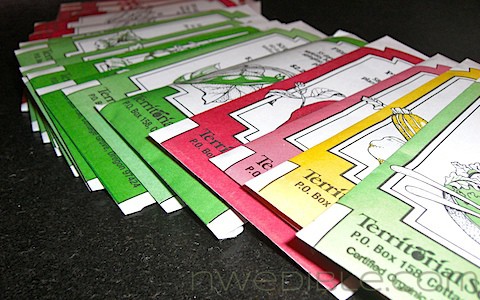 Just one warning about variety packs: be careful how you sow and thin. When I’m growing out seeds from a blend packet, I try to observe the small differences in the seedling appearance as I thin or else it’s mighty easy to cull-out all the slower growing plants and cull-down to just the single, fastest growing variety! That defeats the purpose of a blend, right? If you aren’t comfortable guessing which seedling is a hardy but later maturing variety and which seedling is just runty, planting one seed per pot and taking your chances with germination isn’t a bad idea.

Speaking of seeds per pot, I generally sow 2-4 seeds per pot if I’m starting indoors and about twice as thick as I need to when sowing outdoors. The reason for this is time – I really don’t want to waste 3 weeks of garden time discovering that a certain seed had poor germination. I’d rather thin than lose the growing time if possible. But the vast majority of the time this results in “wasted” seed. Some value is recouped because I eat the thinnings, but a 4-leaf beet seedling is not the same as a baseball sized beet, and I know it. 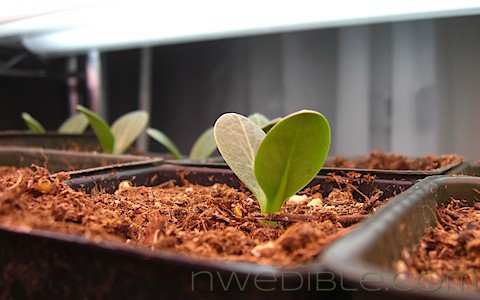 When I posted about the importance of thinning, many gardeners said they plant one seed per pot or final location because they hate thinning. This method will lower the amount of seed you use and help you stretch a seed packet further.

7. Spend Your Money Where It Makes Sense

I am not opposed to hybrid seed and I buy quite a lot of it. (Hybrid seed is not the same as GMO seed, but that’s another post.) Hybrids of certain types of vegetables tend to have more consistent vigor – that’s strength of growth – and uniformity than open pollinated equivalents. The problem is that hybrid seed tends to be quite a bit more expensive than open pollinated seed. (The other problem is that you can’t easilly or reliably save seed from hybrids, but again, that’s another post.) 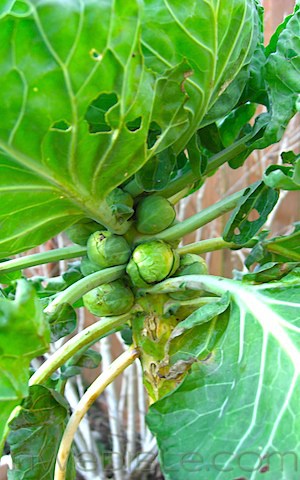 Spend money on the seeds for this...

I tend to buy expensive hybrid seed where the added vigor and uniformity makes sense. Brussels sprouts are a good example. Because sprouts are in the ground for so long and so much space and time is invested in them, it’s very important to me that they mature the way they are supposed to – a sprout that doesn’t form a tight dense ball isn’t a very good sprout. Peppers are another veggie that tends to be hybrid in my garden. Most of the open pollinated peppers take longer to mature and thrive with more heat than I can usually give them, so I pay ridiculous sums for the hybrids (about 20 cents a seed), and have had decent luck getting peppers to ripen. 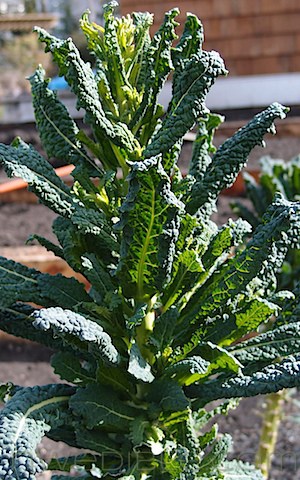 On the other hand, for things like kale, lettuce, parsley or chard, I’m just not worried about small variations in leaf size or color or form (do you really care if some of your flat leaf parsley is longer and skinnier and some is wider and fatter?) so I will often buy less expensive open pollinated seed. Still other vegetables – most notably legumes like peas and beans – you’d be hard pressed to even find hybrid seed because the open pollinated strains are so rock-solid and stable. When you are cruising a seed catalog and see one variety of hybrid collards selling for a buck more than the open pollinated alternative, assess for yourself if – all else being equal – the additional dollar is worth it for collard uniformity.

If all else fails, and you’re still spending too much money on seeds, it might just be time to look into saving your own.

How do you save money on seeds?

Previous Post: « To Do In The Northwest Edible Garden: March 2012
Next Post: A Tour Of The Indoor Seed Starting Rack »