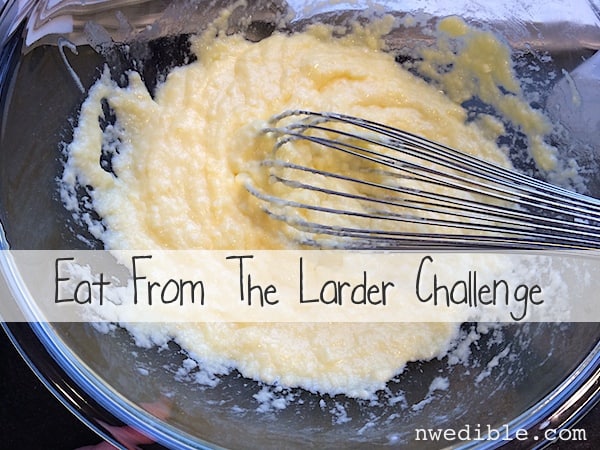 In February I wrote a post called Food Storage For People Who Don’t Hate Food. Most of the feedback I got on that post was very positive, but a few readers seemed skeptical of my claims that eating from the pantry for six months was reasonable, even if one had the food stored.

This floored me – eating from your food storage is part of food storage, to my mind. But two readers sent in such similar emails I had to share them and respond:

I recently got through a big personal trial when my husband lost his job and I had to keep the family fed while not spending more than we had to. But I do not know if you have ever really been in that kind of situation because it sounds like the way you are doing everything is to spend money by buying a lot of things that are supposed to be put aside to eat later. That is fine if you think the world is ending or you have a lot of extra money but we are just now starting to get out from the debt we built up when my husband was unemployed. So we do not have a lot of extra money to buy food to leave just sitting around.

I know you are a chef and have a big garden so you probably know a lot about how to combine things together but it seems not realistic for most people to spend money to eat that kind of food, and still have good food and take care of their dietary needs and everything.

I was hoping to get some ideas for how I should I actually cook for my family if we need to live from our “larder” for six months. In 2009 my husband was unemployed for over a year. Even if I’d known that this was going to happen and had six months of food stocked up I don’t know that I’d have been able to come up with meals without buying a lot of extra food anyway. (I can’t make beans and rice every night!) So is there a menu plan that I should use that goes with your pantry shopping list? Or is there a cookbook you could recommend?

Cooking Is A Basic Skill

How do you cook from your pantry? Well, the answer is actually is really quite simple: practice.

The ability to cook – I’m not talking gourmet multi-course affairs here, just putting dinner on the table every night – is a basic skill of resilience. If you are unable to chunk out meals even when surrounded by good, wholesome ingredients, then you have a skill deficiency, not a food storage problem.

I don’t want to sound unsympathetic, honestly, but the entire point of that food storage post was that you store food for the way you already eat. And if the way you eat doesn’t allow a food store you can tap into when you really need it – in the form of a pantry, a garden, a deep freeze or whatever – then your food choices are way too brittle.

If I understand these emails correctly, Melissa and Christine are also questioning the idea that eating exclusively from the pantry in tough times is even possible.

Well, that sounds like a challenge. So, okay, darling readers, challenge accepted.

Eat From The Larder Challenge

Join me this April and put your food storage to the test, save money, practice pantry eating, get creative and make some room on your shelves and in your freezer before the big 2014 harvest and food preservation season starts.

I eat primarily from the pantry about this time every year, simply because I don’t want to go into a new harvest season with a bunch of old food. If you fancy yourself a productive homekeeper, a planned period to eat down the pantry just makes sense. Even if you have the best larder-building estimates going, some food stuffs have been under-utilized and some have been over-stored.

Maybe you had a bumper crop of winter squash, maybe you made a bad decision at Sam’s Club in the ramen aisle, maybe the kids unexpectedly boycotted applesauce, maybe your partner turned up pregnant and, defying all stereotypes, decided she hated pickles.

We all have pantry items that linger. We all have canned goods that are rolling over into their third year, we all have packages of mystery food in the freezer.

The Eat Down The Larder Challenge is your chance to get creative, use what you already have, save a bunch of grocery money and make space for the new harvest.

I really hope you join me!

These are the rules I’ll be following:

Those are my rules but you can modify these rules to suit your needs. If you have a smaller larder, maybe you want to “allow” certain purchases like dairy, or bread, or whatever. You can opt to give yourself a certain grocery budget to work within (like No Spend Month) that’s challenging but doable.

You can define this Eat From The Larder Challenge in whatever way works for you, so long as the primary goal is to use the food you already have and challenge yourself.

Previous Post: « What Fruits And Veggies Will Grow In Shallow Soil? (Reader Question)
Next Post: How To Make and Freeze Guacamole »