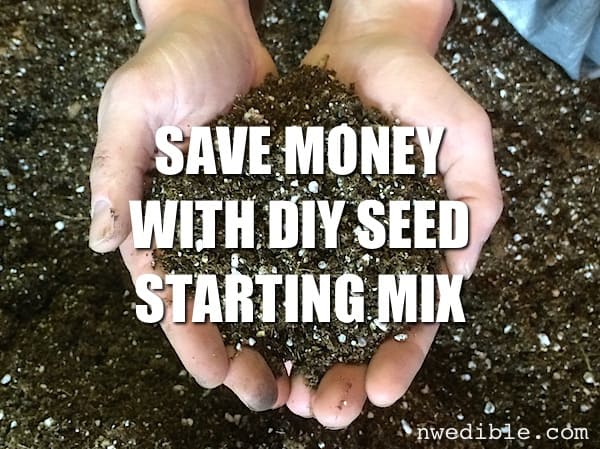 So, you start a lot of seeds and you’re running out of money for seed starting mix. Right-o. Story of my life.

That’s what prompted me to investigate DIY bulk seed starting options, and I’m so glad I did. This is a huge money saver if you are a big seed-starter!

The cost of seed starting mix is primarily in the mixing. Which is to say, if you are willing to spend a little time turning together a few basic ingredients, you can make your own seed starting mix in bulk for way less money than the pre-made stuff costs.

Let’s look at each of these ingredients in turn.

Sterile, inexpensive, acidic and great for holding moisture, this product is typically sold by the compressed bale. Bales are usually 3.0 or 3.8 cubic feet. Peat moss is carved up from ancient bogs, and most U.S. sold peat moss is mined from Canada.

Reasonable people disagree about the sustainability of peat moss. The peat moss industry would like to assure you that there is lots and lots of peat in northern Canadian bogs. Other reliable experts feel very differently.

I don’t think buying a bale of peat moss is the greatest environmental sin most of us will ever commit in our lives, but concede that there are good arguments to find a substitute for this product.

The most common substitute is coconut coir, which has it’s own set of sustainability issues and may not promote strong seedling growth as well as peat moss. If you prefer to use coconut coir, get the horticultural grade, finely ground kind and substitute 1 to 1 for the peat. 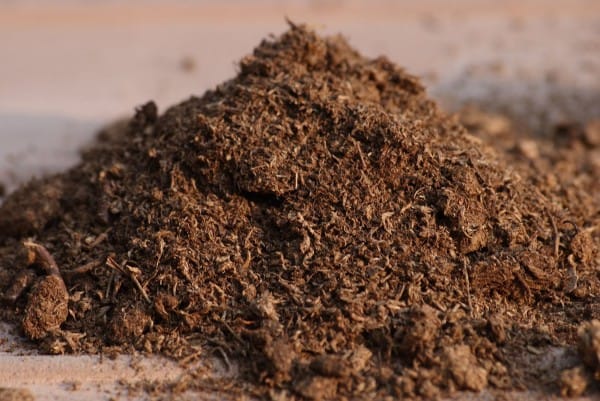 Compost supplies background nutrition to your seedlings once they are up and growing, reduces the amount of peat moss used in the mix, and helps to prevent soil-crusting which can limit seedling emergence. Vermicompost seems to have a beneficial effect on seedlings, and some studies suggest it reduces damping off disease.

Homemade or purchased compost, either is fine, so long as the compost is well and truly finished and is screened to remove any big chunky bits. Both homemade vermicompost and most backyard-made compost are alive, and as such will contain the good and the bad of soil life.

It’s possible to introduce a ton of seeds, and possibly pests and pathogens to your seed starting with unsterilized compost. If you use vermicompost with a lot of tomato seeds in it, for example, and then sow tomato seeds, you may very well end up with volunteer tomato seeds instead of the varieties you intended to sow.

The cost of compost can vary greatly depending on where you get it, how you buy it, and what characteristics you want from your compost. The homemade stuff is free, of course. (Yay free!) A bag of reasonably good quality finished compost purchased by the bag costs about $4 a cubic foot where I live. Use your own best judgement when deciding if commercial, sterilized compost or homemade compost is the right choice for you.

This lightweight soil amendment is used to improve drainage and lighten potting mixes. It looks a bit like ground-up styrofoam but it’s actually a totally natural product made by heating a silica-rich volcanic rock. At high enough temperatures the moisture in the rock vaporizes and the perlite rock “pops” just like popcorn, expanding into this fascinating, puffy, lightweight, white pebble.

Perlite doesn’t hold much water, so it promotes a nice balance of moisture and air at the root zone. You have to handle it fairly gently, because the drainage promoting and aeration benefits of perlite are diminished if it gets squished and loses it’s puffy nooks and crannies. I bought my perlite in 2 cubic foot bags at the big-box store for about $17. 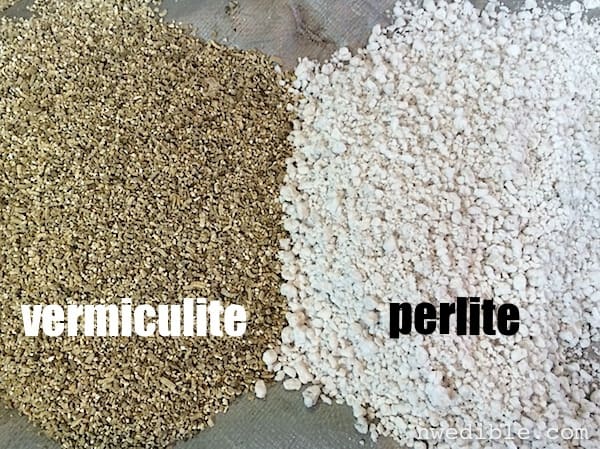 Similar to – and easily confused with – perlite, vermiculite is another silica rich rock which expands when heated into long tubes. These worm-like tubes are how vermiculite (literally, “worm-breeding rock”) got its name. Manufactures crush vermiculite into flakes, then super heat those flakes so they expand into crazy rock worm pieces. The expanded vermiculite is then crushed further or screened to get pieces of consistent sizes.

Vermiculite has similar drainage promotion, soil-lightening and aeration benefits to perlite, but it also holds moisture well and releases it to surrounding soil. This helps moderate the moisture levels in the seed-starting mix and reduces the need to babysit your seedlings with the watering can. I bought vermiculite in 2 cubic foot bags for about $21.

Dolomite is a good source of calcium and magnesium, and shifts the pH of the peat moss from strongly acidic to the barely acidic pH most plants prefer. Use finely ground powdered dolomite lime to get the fastest-acting pH adjustment. It should look kinda like greyish flour, not like steel-cut oats.

If you use peat moss, the dolomite lime is essential for the best results. If you use coco coir, sharp sand, or some other substitute for the peat moss, the lime isn’t necessary. A giant 40 or 50 pound bag of lime will run about $5 and last you basically forever. 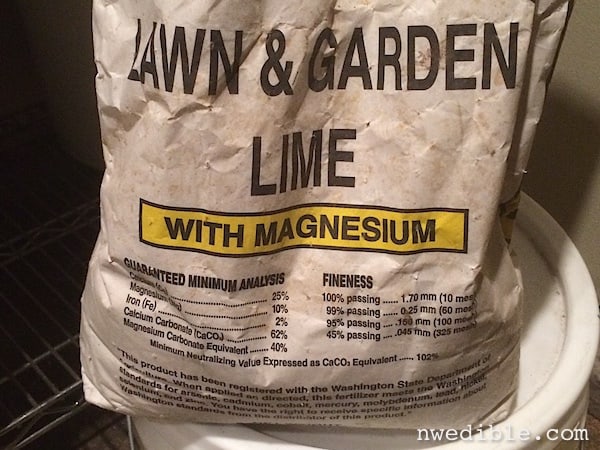 In combination with the compost, this adds background fertility to help your plants grow nice and consistently so you don’t have to babysit them with foliar feeds all the time.

I recommend something that’s specifically formulated as slow release for your big batch, and then if you notice your plants look hungry, you can feed them a little bit of fast acting fertilizer, like blood meal, as needed.

Dr. Earth makes a good basic 5-5-5 blend that I’ve used in the past, but if you have a fertilizer brand you like, the name on the bag isn’t that important. Price varies widely.

Is It Cheaper? How Does The Math Play? 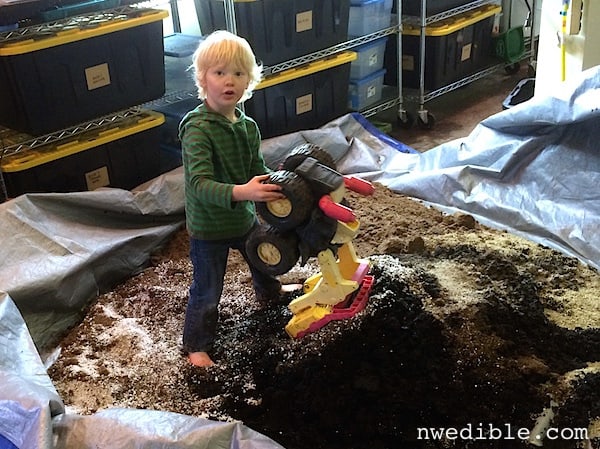 You can make a giant batch of this seed starter mix with:

You’ll end up with about 12 cubic feet of finished seed starting mix and spend about $70 (less if you use homemade compost).

12 cubic feet is a lot (4 year old shown above for scale) so don’t go making a batch this size unless you start a lot of seeds. It works out to about 360 quarts of seed starting mix. 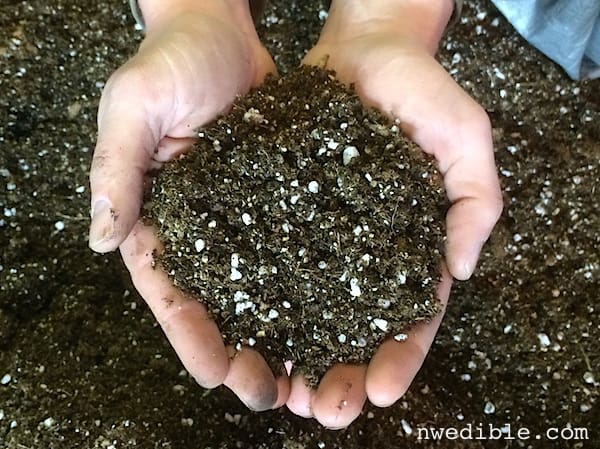 I knew from the texture of this mix that seedling roots would love it. It’s moisture retentive but light, so it supplies that crucial blend of air and water that plants need to balance.

The big question mark was how much dolomite lime to add. The peat moss is very acidic by itself – so much so that it would stunt or even kill seedlings grown in it. Lime is needed to moderate this acidity, but how much?

I wasn’t sure, so I checked out what the experts do.

Cornell University pretty much invented the Peatlite potting soil blend used by plant growers all over now. Their basic seed blend calls for:

Utah State University goes a little lighter on the lime.

In their basic greenhouse mix, they use:

It’s important to note that in both cases, the only other ingredient in the Utah State or Cornell mixes is perlite, which doesn’t affect pH, so we can safely extrapolate that these numbers represent the lime necessary to buffer a given quantity of sphagnum peat moss.

Peat moss varies in it’s pH, but I don’t have a full soil testing lab at my disposal, and I needed a starting place. My first instinct was to simply split the Cornell-Utah State difference, and go for a nice, round 8 oz. per cubic foot of peat moss.

As it turns out, that’s an inconvenient amount to measure by volume, being just a bit over a half cup, but less than 3/4 cup.

Since this mix contains other bulk ingredients, including compost and vermiculite, which also help to buffer the acidity of the peat moss, so I thought it prudent to err on the side of less lime and easy measuring, and rounded down to an even 1/2 cup of finely ground dolomite, which works out to about 6.5 oz.

Then, I used this mix and watched my plants.

I wanted to see how they germinated, leafed out and grew. Across the board I’ve been very pleased. There’s no sign of nutrient tie-up, which happens when the pH range is off. The plants have good color, nice strong growth – I’m a happy plant mama. 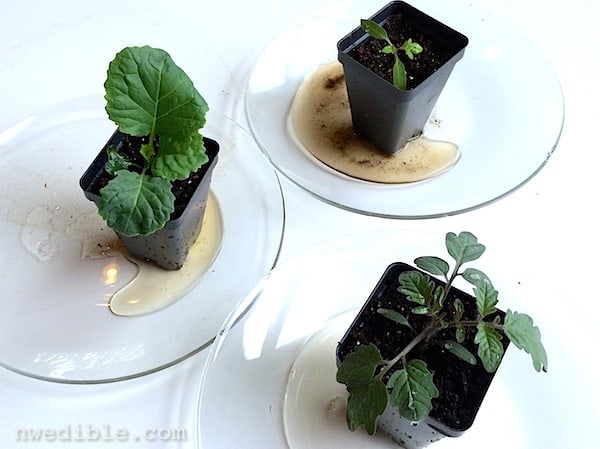 But just to be sure, before I shared this mix, I performed a not-very-scientific pH test of the leachate of some of my seedlings. I kinda following the instructions here. I say kinda, because I did one stupid thing that skewed my results. 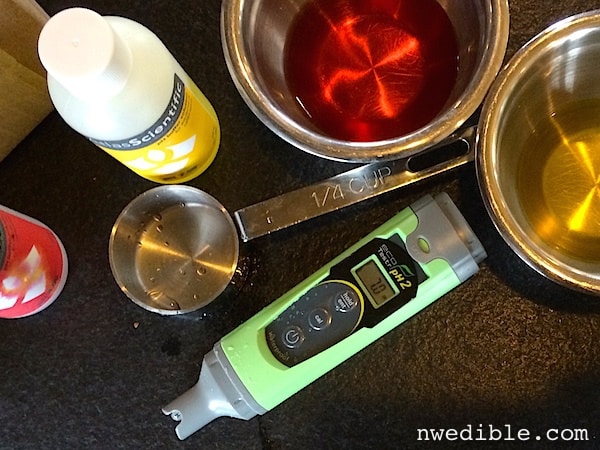 I watered my seedlings, let them sit for a few hours, then poured several tablespoons of tap water over three different seedlings set on a glass plate. The leachate dripped through, and using my just-calibrated pH tester, I measured the pH of the liquid. 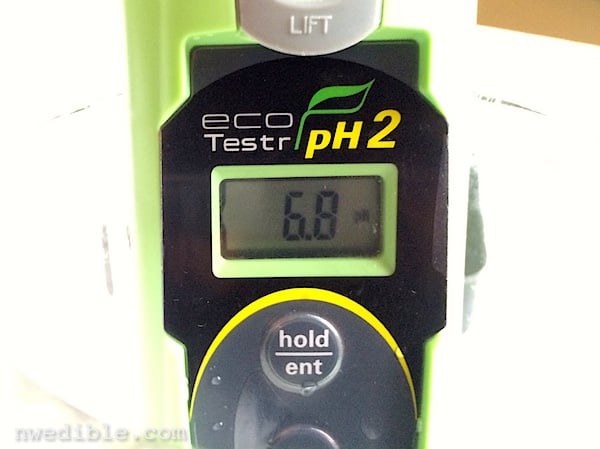 Consistent 6.8 on all three samples. Very slightly acidic. Not too bad. I’d prefer a slightly lower pH, but I can live with it. Then I realized my natural tap water runs alkaline and I really should have used distilled water for this test. D’oh!

I didn’t have any distilled water, so I pH tested my tap water, just for reference. It was 7.4, or slightly alkaline. That confirmed what I’d thought – my leachate pH results were skewed a bit upwards by my tap water, and the pH balance of my potting mix was just fine.

The seedlings certainly think so, and I’m saving a ton of money starting them!