At a certain point I might as well admit that we drink a rather obscene amount of coffee. It’s almost all frugal, brew-at-home type coffee, but still: that stuff ads up.

Luckily, the grounds are almost as valuable as the liquid coffee, and we save them for use in the garden, thereby getting the most bang for our fair-trade-coffee-buck. 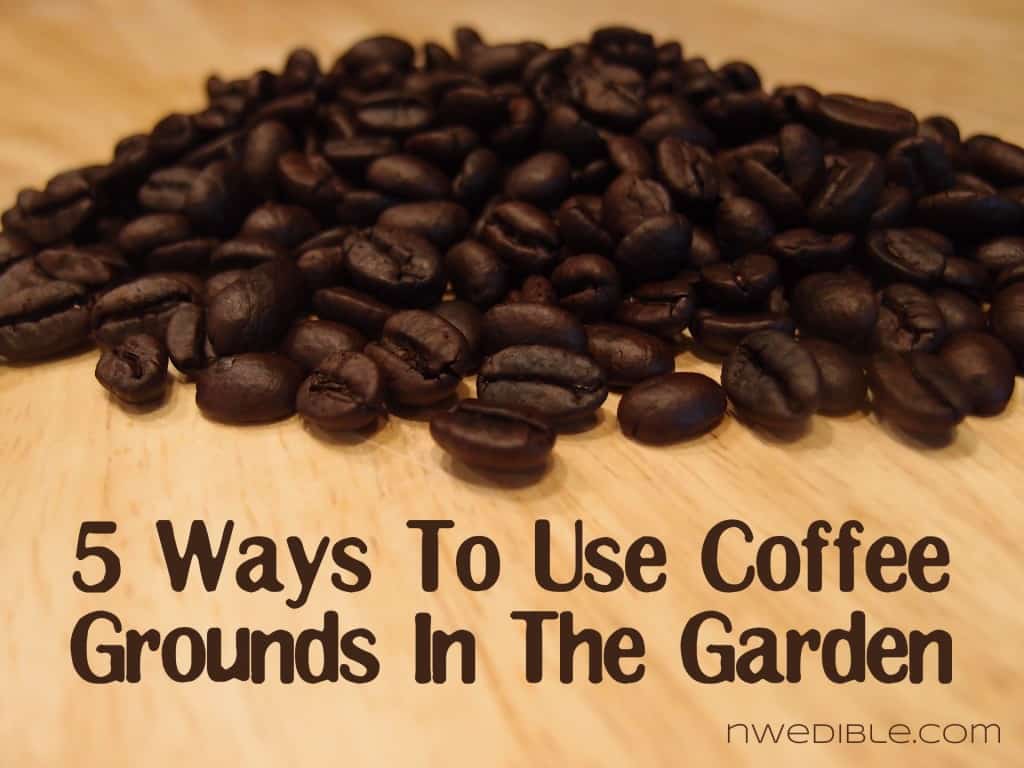 These are my five favorite ways to use coffee grounds in the garden.

The majority of our grounds get dumped out, directly on the soil, as sheet mulch around around our berries and fruit trees. The common assumption is that coffee grounds are acidic, but tests on the pH of grounds have shown results from mildly acid to mildly alkaline, and research indicates that the pH of the grounds tends towards neutral as it decomposes. I use coffee grounds as a mulch around blueberries, fruit trees, currants and cane fruit, all with good result.

When you mulch with coffee grounds, don’t pile it on. That’s a sure-fire way to get moldy mulch. A good half-inch thick layer atop your normal organic mulch in any one spot will do nicely. It will break down relatively quickly as worms and soil microbes go to work, and when it does you can add more. Coffee works like any other organic mulch, with a few added advantages discussed below.

You probably know that the main nitrogen component in DIY organic fertilizers, like Steve Solomon’s famous mix, is seedmeal. Well, if you think about it, a coffee bean is a processed seed. As you’d expect, coffee grounds are high in nitrogen, at about 10%. Depending on the exact beans and extraction process, “the carbon to nitrogen ratio of coffee grounds can be as low as 11:1, an ideal ratio for plant and soil nutrition,” according to WSU extension.

With nitrogen levels like that, pure coffee grounds make an excellent side-dressing for leafy greens and hungry fruiting veg, like tomatoes and squash, early in their growth. I particularly like side dressing spinach with used coffee grounds.

Slugs get the heebie-jeebies crawling over coffee grounds. I think it scratches their slimy underbellies in an unpleasant way. Do you have some veg, like Napa Cabbage, that seems like a total slug magnet? Try banding coffee grounds in a uniform circle around the plant as a seedling, and keep the band topped up. It helps. I’m not giving away my Sluggo just yet, but it helps.

I know some people say that you shouldn’t feed worms coffee grounds, but I have Seattle worms. They’re all holding teeny Starbucks cups and wearing fleece vests as they crawl around their worm bin, talking about Python hacks and when they’ll finally be able to get up to the mountains to go snowboarding.

Coffee grounds aren’t the only thing I put in my worm bin, of course, but mixed in as part of a balanced diet of cardboard, shredded paper, kitchen scraps, banana peels and the like, the worms seem to process coffee grounds without any issue.

Decomposing coffee grounds have their own fungal and mold colonies and those fungal colonies tend to fight off other fungal colonies. If this seems weird, just remember that the antibiotic penicillin was developed from a mold. The world of teeny, tiny things is fighting for space and resources just as fiercely as the world of big, visible things, and you can use that to your advantage.

The natural mold and fungus colonies on coffee “appear to suppress some common fungal rots and wilts, including Fusarium, Pythium, and Sclerotinia species,” according to research. It’s hard to quantify exactly how this all plays out in the big outside world with millions of variables, but incorporating coffee grounds into your compost may help to prevent build-up of nasty verticulum and fusarium wilt inoculates. I figure it’s worth a shot. If I have coffee grounds on hand, I will throw a handful of grounds into the transplant hole for tomatoes, peppers or eggplant, since these plants tend to be susceptable to various wilts.

How do you use coffee grounds in your garden?