Ah the simple life. Sounds so placid, doesn’t it? All those simple pleasures: home-grown food, warm earth between our toes, the cluck and baa and buzz of backyard animals, the happy smells of a kitchen much used.

So why does this simple life seem so freaking complex sometimes, huh? That’s the part no one talks about. How to find the time to squeeze “simple life” into “modern life.”

I have been on an active mission to cut down the amount of time I feel I “have to” garden without sacrificing the quantity or quality of the crops I’m growing. (Gardening on my own schedule and for the joy of it is always welcome!)

Everywhere, always, and without exception: mulch. Mulch trees and shrubs. Mulch paths. Mulch ornamental beds and edible crops. Mulch potted plants and bare earth yet to be filled with life. Mulch raised garden beds full of annual crops and plantings that return perennially. Mulch your dog if they sit still for too long. A minute spent mulching pays hours of dividends in the maintenance you don’t have to do later.

Why mulch? It is a fact that in any area with even the tiniest sliver of fertility to build on, nature will cover bare dirt. If you don’t mulch bare earth, you are sending out a screaming invitation to Mother Nature to come in and cover the soil for you, and you probably won’t like the way she gets it done: weeds.

This reminds me of my kids cleaning their bedrooms. They can choose not to pick-up their stuff, but if I clean their room I do it with a trash bag. I’m very efficient – everything on the floor gets thrown away. Sometimes you don’t want mom – or mama nature – doing it for you. So mulch. 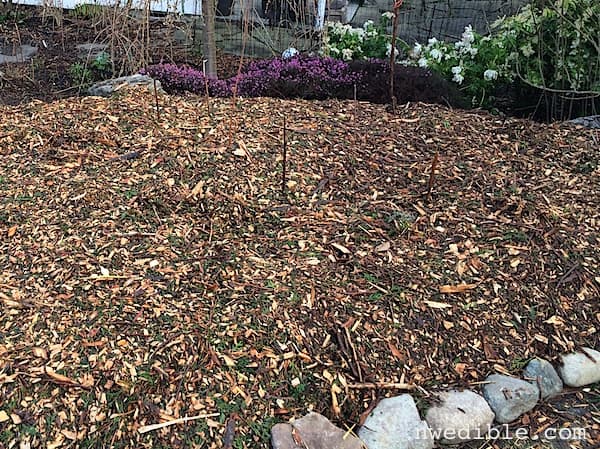 Arborists woodchips are my preferred mulch.

The primary time saving advantage of mulch is that it will stop a huge swath of weeds from germinating. That means hundreds – perhaps hundreds of thousands – of weeds you won’t have to deal with down the road.

Good choices for mulch include arborists wood chips, grass clippings, compost, straw, stable or coop bedding, leaves, shredded plain paper and plain cardboard. In the right setting, gravel or rocks can be a reasonable mulch choice, but because they are inorganic rocks don’t offer the same advantages as organic mulches.

Bad choices for mulch include anything made from plastic or ground up tires, anything described as a “nugget,” anything that includes some sort of herbicide along with the mulch, and anything died a weird spray-tan orange color. Do you really want your garden colored to look like it’s ready to step onstage at The Arnold? 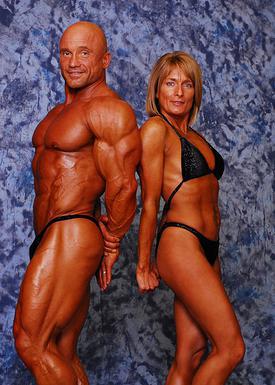 Your mulch does not need a spray tan.

Put Your Irrigation On Auto Pilot

Watering is a time killer, and if you are watering anything beyond a few pots by hand, chances are you aren’t watering very well. I know because sometimes I stand over a bed with a hose and wave my little watering sprayer back and forth for what feels like forever. And I see the soil and it’s all dark and damp and fresh looking, and I scrape back a quarter-inch and the soil is still bone dry.

You can use all kinds of tech-solutions to automate your irrigation. I snake soaker hoses up and down my garden beds and hold them in place with garden staples. The soaker hose runs to a valve, and the valve runs to an irrigation controller that automatically waters all the beds at the time and frequency I set.

There’s a lot of ways to go. I basically hate micro-drip irrigation for being too fussy, too expensive, and terrible at dealing with the frequent planting changes my beds go through, but if you love it or live in the desert, maybe it’s the right solution for you.

Whatever water delivery method you choose, get it automated. I use an older model of this controller to control delivery of water to my main garden area and it works great, but if you don’t have a large garden, a less expensive irrigation timer like this one works fine too.

It’s pretty hard to till raised beds (although I did try once and four years later that bed still has more weed problems than any other) but I used to do an awful lot more manual soil turning than I do now.

Partially, this is because I really like doing in the garden, and “turning the soil” seems so totally useful, doesn’t it? It just screams effort and industriousness. When you’re stooped over for three days from digging a few beds, you know you’ve really done something.

The problem is, often what you’ve done doesn’t need doing in the first place, and by doing it, you’re just setting yourself up to do more.

Turning and tilling the soil:

There are legitimate reasons to go at your ground with a shovel and garden fork, particularly if you are just establishing a garden in an area of poor soil. But there are no garden situations I can think of where turning more than the top few inches of soil is truly necessary, and in almost all cases doing that work will make more work later on. So why not skip off that treadmill all together?

Years ago, I used to have pea-gravel paths between my garden beds and a compulsion that rocks were for paths and soil was for garden beds. My daughter, a toddler at the time, did not share my anal-retentiveness and thought it was great fun to scoop up the gravel and dump it into the garden beds.

And so I spent hours picking pea gravel out of dirt.

Was I flipping nuts? Clearly.

When I see little rocks now, you know what I think? “Slow release mineral fertilizer.” Those rocks aren’t bothering anybody.

Now, typically I only take out baseball-size or larger rocks that somehow work their way from the core of the earth up into my planting areas. I can use the big ones elsewhere in my garden to line paths and stuff, so they are worth grabbing.

Some reasonable quantities of rocks in with your garden soil assists with drainage and act as micro heat sinks, so unless you are truly a square-inch gardener and need to make sure every cubic centimeter of soil is available for roots, just relax about the rocks.

For weeks I’ve been staring down a rather unkempt and ugly perennial bed. My solution? A layer of cardboard covered in woodchips to smother out unwanted weeds.

You garden will get weeds. If you ignore my mulch advice, you’ll get a lot of them. It helps to not demand perfection and instead to ask why a weed is a problem. Is it invasive, will it harm your plants, is it noxious or ugly, or is it just unexpected?

I’ve started doing “weed triage” which makes it far easier to get a psychological handle on weeds.

Dig Out
Invasive, runner-rooted stuff has to be dealt with or it will outcompete everything. In my yard, bindweed is the worst offender. I just can’t let bindweed go or it will go, eventually smothering everything I want growing. Some of the grasses are also in this category. These I just pull, dig out, and try to keep up on. I comfort myself in the knowledge that even RoundUp or a similar herbicide wouldn’t actually do much against these type of weeds for long. There is no solution, really, just management.

Chop and Drop
Deep, tap-rooted stuff can be a pain in the ass to remove, so I’ve mostly stop trying. I just cut off the foliage before it can go to seed. Repeated cutting of foliage will weaken the plants root system eventually, and as it dies, it will rot in place, doing a heck of a job to loosen compacted soil. Dropping the tender leaves right on the ground allows them to compost-in-place. This technique is called “Chop and Drop” and is popular in permaculture circles.

Smother
Soft annual weeds are easy. My preferred method is to smother them in place. Lay out a nice thick layer of cardboard, get it wet so it conforms to the ground, and cover with as many woodchips as you can get your hands on. Just get to them before they seed. If annual weeds have flourished in an area where it will be difficult to smother-kill, I use my DIY Weedkiller. 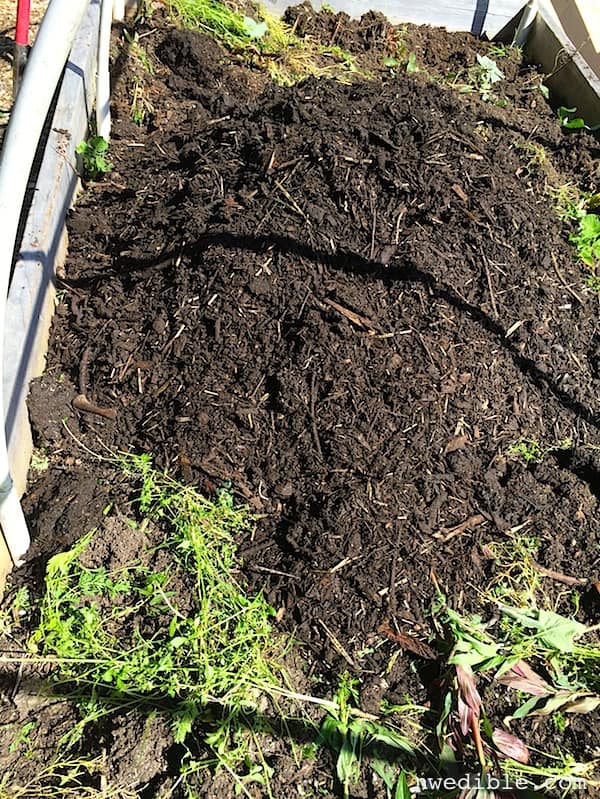 Just smother and call it good.

Ignore
Assuming they aren’t noxious, this is a legitimate method of dealing with weeds. Does your entire yard need to be weed-free? Nope. Would it actually benefit your overall garden ecosystem to have a little weedy wildflower patch in the back, out of sight? Probably. Sometimes you can reduce your workload a ton simply by shifting your perspective.

What time-saving techniques do you use in the garden?