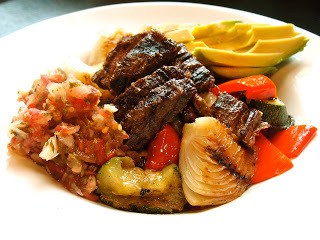 Personally, as I’ve mentioned before, I don’t know what I’d eat if it weren’t for leftovers. I think leftovers get a bad rap because people think they’re going to be eating meatloaf sandwiches for 5-days running, or because of some really, really cautious ideas of what constitutes food safety.

How do you avoid the leftover trap of Meatloaf Monday becoming “Meatloaf Again, huh?” Tuesday, “Do I Really Have To Have Meatloaf?” Wednesday, “Dear God, Anything But Meatloaf” Thursday and “Hey, Where Did Everybody Go?” Friday?

Easy! You work from pre-made components. For me, this mostly means previously home-made, but there’s some wiggle room here. This is the first year I’ve done my own salsa, for example. Up until about a month ago I just bought tubs of it in the refrigerator section.

Let’s say maybe you buy those pre-cooked chicken breast strips. That’s a meal component you like to have on hand – it makes dinners easier. So keep in the back of your mind that one day, instead of buying pre-cooked strips, you could grill up a few chicken breasts and have DIY strips in your fridge for the week. They’d be just as ready-to-go, and they wouldn’t have the same texture as your kitchen sponge.

Yesterday, working with components, this was what I made for my lunch. It’s a skirt steak and grilled vegetable salad. I added some of that lacto-fermented salsa I made earlier this month and half an avocado (cause I had one) to leftovers and, in 3 minutes, had a delicious, new meal from the old components: 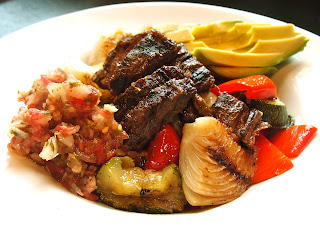 The trick is having components on hand and ready to go, and that means cooking them. This past weekend we fired up the grill and cooked a lot of components for the week: lots of garden vegetables, skirt steak, salmon, chicken wings and sausage filled the grill. My feeling is, it’s just as easy to cook a whole grill full of food as just a few sausages, so I might as well get some meal milage out of the effort and energy expended. 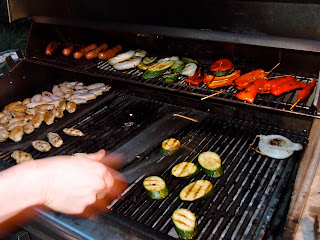 Here’s a veggie-grilling tip: if you run a skewer through the cross-section of an onion ring, the onion will stay together as you grill it and won’t fall through the barbecue grates. 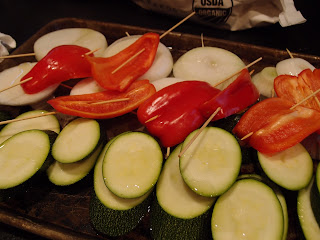 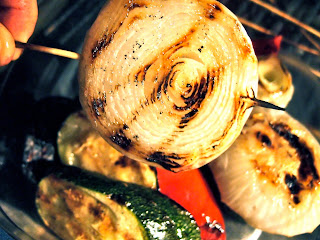 Those components, plus a big pot of brown rice, will combine in a bunch of different ways over the next several days. We had the original mixed grill meal hot off the fire and served with dipping sauces (a vaguely Korean-barbecue-esque meal), Bella got cold salmon with mayo in her school lunch, Nick has commandeered most of the wings plus some veggies and a jug of Franks Red Hot for a few days of work-lunches (hot wings are never subject to palate fatigue, incredibly), I’m throwing together steak salads at home for the toddler and me. 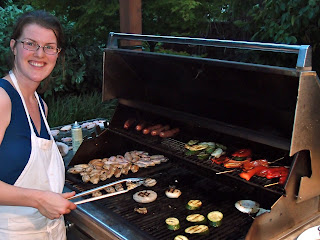 A rice bowl will probably make an appearance at some point, I wouldn’t be surprised if a roasted vegetable pizza supplied dinner one night, and if I’m really good I’ll eek a sausage frittata or sausage and kale soup out the components too. You get the idea. One big grill-off of food will become 5 or 8 different meals.

None of which is meatloaf.

Do you pre-cook components to make your daily meal prep easier?

Previous Post: « The Kids Who Will Save The World
Next Post: Taking The Homestead In For Lunch »