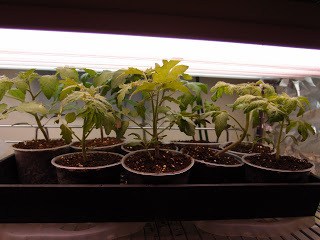 Despite my limited success with tomatoes, I have yet again found myself with a whole gaggle of seedlings.
I’ve got three flats of tomatoes and peppers; I think there’s 26 individual tomato plants. Goodness knows where I’m going to put them all this year. I’m thinking of trying grow bags placed up on my black asphalt-shingled roof. There’s a part of the roof that is relatively easy to access from the second-story deck. Is this pure genius or a total disaster waiting to happen? I can’t decide. One the one hand, think of the root warmth that would be generated. One the other hand, how do I keep them watered, because I’m sure they’ll dry out quickly? On the other, other hand, the slugs will probably leave them alone that high up. But on the fourth and final hand, building supports for the vines would be a a challenge and the end of season clean-up might be a nightmare. 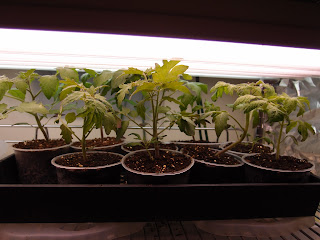 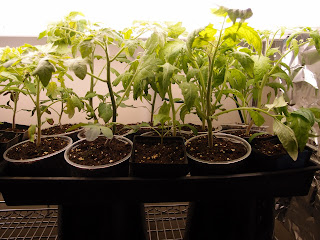 The seedlings are looking particularly stocky this year, which I attribute to the 24/7 fake wind generated by my old cheap fan. I really do think they grow hardier when they have good solid airflow. 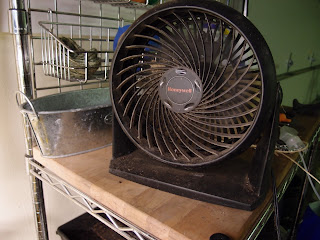 The tomato seedlings are starting to really go. I’m going to have to get in there and up-pot them this weekend. (If you are new to starting your own seeds, you can check out my up-potting method.) The stems are long enough to bury down and the root systems are filling out their re-used deli container pots. If you grow with kids, start a few plants in clear containers. Use plastic deli containers, old clear plastic keg cups, or whatever you might have lying around that can have a few holes drilled in the bottom. Kids think it’s really cool to see the developing root system. Actually, I think it’s pretty cool, too. 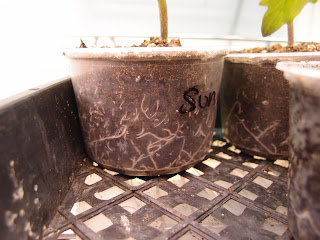 I like to transplant when the roots are filling out the pot but not yet twining too much around the bottom of the container. This guy is just perfect for up-potting. 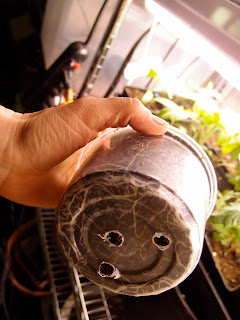 How are your tomatoes doing? Do you have too many starts and not enough room? Would you attempt the Grow-Bag-On-Roof madness?