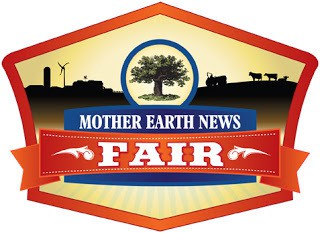 Homebrew Husband and I made a very last minute decision to attend the Mother Earth News Fair this past weekend. We weren’t going to brave the ride to the fair with our son, Young Mr. Screams-In-Car, but a combination of things came together late Friday that convinced us it would be worth attempting the hour-long drive. 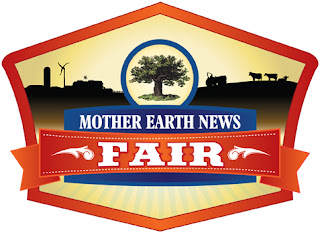 Chief among these was the realization that Nick had barely seen the kids for a few weeks. His company is in the process of being acquired. When Nick learned of the buy-out, he called up the scheduler at his flexible, part-time second job and said, “Gimme all the work you got.” We figured this was a good time to sock away all the extra cash we could. So Nick’s been working late three nights a week, leaving at around 6 am for the day job and returning at around 11 pm from the evening gig.

Net result: he’s exhausted and the rest of us have really missed him, so we decided this was the perfect opportunity to grab a hotel room near the fair for a night, take a 36 hour break and call the whole thing a family mini-vacation.

The Mother Earth News Fair was great. It was well organized and had a nice line-up of speakers. Seattle had uncharacteristically sunny, clear weather for the weekend and the hippies came out in droves, but the venue was large enough that the event never felt oppressively crowded.

(Aside: does anyone else think it’s funny that Mother Earth News abbreviates to MEN? Mind you, since I often abbreviate Northwest Edible to NWE, which I guess would be pronounced Nuh-wee, I’m not judging. I just think a weekend at the “MEN Fair” sounds silly.)

I was excited to see Joel Salatin, the “Grass Farmer” from Omnivore’s Dilemma

and author of a ton of books including my favorite, Everything I Want To Do Is Illegal

, speak. He was definitely the head-liner speaker, and it was standing room only for his talk.

There was a kid’s stage with cheese making, ice cream and beekeeping for kids, among other fun craft and demo things. Between that, numerous kid’s game tables and the new Lucy and Steven Hawking book

she’s been dying to get her hands on, Bella was a happy camper.

I got the ego-stroke of a lifetime Saturday morning when Susan, one of my readers, recognized me. Truthfully I think she mostly recognized Nick (his red curly hair makes him easy to spot) but the idea that anyone would know who I am while I’m just hanging out, nursing the babe…well, it was pretty amazing. Later I met Susan’s daughter, Tamara, and one of Tamara’s beautiful daughters. They are running a multi-generational homestead on Camano Island with chickens, pigs, turkeys and goats, in addition to the human and canine family members. I just love that three generations of their family are working towards these productive goals. If the personalities allow it, I can’t imagine a better way to structure a homestead.

On Sunday, just when I was getting over the high of having a fan, another reader recognized us (it’s Nick’s hair, I’m telling you…)! Sinfonian, who you may know as a regular commenter on my blog or from his own chunk of the interweb, said hello. It was great to put a face to the blog handle, and we got to talk garden shop for a good while. I met his brother, who is also doing the urban homesteader thing with a vengeance, and we all talked chickens and meat rabbits and the risks and rewards of late season tunnel cloching.

Many of the fair exhibitors were demonstrating great stuff: top-bar beehives, organic local dairy products, heirloom seeds, hipster-hippie wear, composting toilets, solar arrays, raised garden beds and the like. Washington State Conservation Commission was giving away native tree saplings rescued from construction sites, and I walked away with 10 paper birch saplings and 30 vine maple saplings. I have wanted to line the north side of my house with vine maples for some time, and the remainder will go to the stream across the street. It’s currently overrun by non-natives but I plan to guerrilla garden it back to riparian respectability.

Our favorite exhibitors were the historical reenactors from Fort Nisqually Living History Museum. Men and women in 1830s period dress were demonstrating how to churn butter, grind coffee, card and spin wool, chop wood, cook and play just as the residents of the first European settlement on Puget Sound would have. We are planning a family trip to the fort later in the summer to get some more reenactor goodness.

Stay tuned for more Fair-inspired posting this week. I’ve got plenty to share on Joel Salatin’s perspective on pasture management, Nikhil Arora’s take on entrepreneurialism in sustainable food systems, Ed Begley’s thoughts on environmentalism for beginners, and my tremendous disappointment at not winning a top-bar beehive.

By the way, our son slept on the ride to the fair, but screamed most of the way home. It’s a start.

Did you go to the Puyallup MEN Fair? What’d you think? Are you planning on attending the San Rafael, California or Seven Springs, Pennsylvania fair?

Previous Post: « Just What The Internet Doesn't Knead (Updated)
Next Post: Back To The Roots Oyster Mushroom Kit Giveaway! »