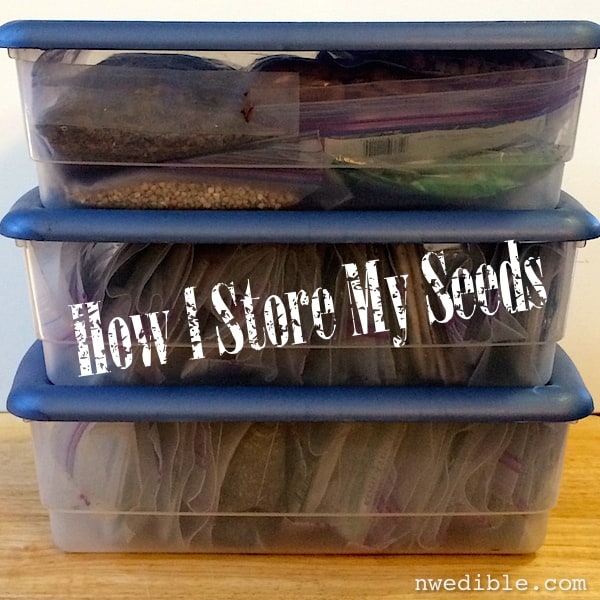 This post was originally published January 23, 2012. I’ve slightly updated my own seed storage method (below), and we’ve welcomed a ton of new gardeners to the fold in the last three years, so I thought it was time to revisit seed storage basics.

I am getting a lot of questions about seeds right now. A friend came over to tour the garden and said she was thinking of using seed this year – a first for her. Another friend asked if she could use last year’s seeds.

Once you graduate past a few patio tomato plants (not that there is anything wrong with a few patio tomatoes, mind you) you’re going to have to deal with seeds. Here’s what you need to know about saving your purchased seed. Saving seeds from your own plants is a totally different topic, and maybe one day I’ll know enough to intelligently get into it. But for now, Vegetable Seeds For Beginners.

Why Seeds Instead of Starts?

Seeds are your friend. Some plants just do a lot better when sown directly outside because they hate it when people screw with their root system. Root vegetables, understandably, are like this. Most Cucurbitaceae (melon-type plants like – cucumbers, squashes, melons, etc.) are like this too. I have a dirty little contrarian secret about how I start cucurbits indoors for transplant but we can get to that later.

Beyond avoiding root disturbance, if you grow in any quantity you’ll save a manure-load of money growing from seed. Example: I see lettuce starts at my local, excellent nursery for $2.99 for 4 lettuce plants. A $1.79, 2 gram packet of lettuce holds between 1200 and 2400 lettuce seeds.

Let’s say you drop half your seed packet on the floor and get a 25% actual in-ground germination from the rest (we’re talking worst case scenario here, can you tell?). You’re still looking at a lettuce per-head cost of, oh, about seven-tenths of a penny instead of a per-head cost of about 75-cents. Now if my family of four and our various guests eat 2 heads of lettuce a day for 4 months (not at all improbable in my family) I’ll save about $90 by growing my lettuce from seed instead of starts.

These little things adds up. To put it in perspective, that $90 could buy you a pair of nice seed germination set-ups and still leave you $40 for a yard of good compost – delivered! Or it could more than cover the cost of Territorial Seed’s Victory Garden In A Bucket. Or, hey, it could just be $90 you don’t have to spend on anything.

Another reason to go with seeds is varietal options. People like options. In America our entire culture is built on the idea that people need and deserve to have as many options as possible. Why else would we think we need 500 channels of TV? Well, seeds give you options. Seeds are like the freedom to choose between the World Rally Championship and the 24 Hours of Le Mans instead of being stuck with NASCAR, just because NASCAR has name recognition going for it.

At a nursery, even a good one, you’ll be hard pressed to find more than 3 or 4 types of bean starts. I love Romano Beans, and I grow some variety of them every year. Even if I wanted to pay nursery start prices for pole beans, romano starts are seldom available.

But I’ll Never Use 2400 Lettuce Seeds This Year!

Not to fret, you don’t have to eat 2400 heads of lettuce this year! Although, if you are sowing seeds in broad swaths for cut and cut again crops like mesclun mixes, you might easily go through a seed packet of lettuce (or four) in a year. It’s possible – ask me how I know.

You can and should save your unused seed for the next year. Almost all newly purchased seed will be sufficiently fresh that you can continue to use it and expect adequate real-world germination for at least three years. There are some exceptions, and I’ll get to them in a minute.

For now, focus on that at least part…at least three years, and potentially a lot longer, depending on the seed we’re talking about and how it’s stored. Lettuce is viable in average storage conditions for five years. Five! In climate-considered storage, you might get 8 or even 10 years out of it, just for taking some simple steps to protect your seed. Nominal seed life for beets is four years. Squash also gets four years on paper but I have summer squash seed from 2005 that I’ll be using this year. I’ve tested it and it germinates with good vigor.

I said there were exceptions to this long-lived-seed bonanza. I have found parsnips and onions to be a bit touchy about seed freshness, with an “official” catalog expiration of 1 year. Generally that seed isn’t super expensive, so I’ll buy those two fresh annually or go 2 years at the most. For more details, check out this great table of seed viability.

Even if the waste and economic foolishness of throwing out good seed doesn’t move you to save your leftover seeds, consider this: sometimes seed crops fail and you just can’t get the seed you want. Sometimes there is a year when that one variety you absolutely can’t live without just doesn’t do well, and not enough viable seed can be brought to market to supply the demand. This happened a few years ago with a regionally popular winter squash called Sweet Meat. You could not find Sweet Meat seed anywhere. My neighbor, a long-time vegetable gardener, looked at me like I was handing her free $100 bills when I was able to pass a Sweet Meat start over the fence to her because I had some leftover seed from a previous year.

But I Don’t Have A Climate Controlled Seed Bunker!

Seeds are kind of like bears. Even when they are hibernating, they’re alive and drawing down their energy resources to stay that way. To keep them in tip-top shape the longest, you need to provide an environment that draws down their (and I can’t believe I’m using this phrase) “life energy” as little as possible. When you want your seed to use up all its stored energy growing into a little sproutlet, you give it warmth and moisture. To keep it from using any more energy than necessary, you do the opposite – you keep it cold and dry.

Can you think of a place in your home that is always cold and dry?

Yup, the refrigerator! An auto-defrost (aka “modern”) fridge is dry – have you ever noticed how something spilled on a fridge shelf just sort of dehydrates? (Oh – I’m the only one who doesn’t wipe those spills up immediately? Ok, moving on, then…) The refrigerator is also cold, ideally keeping the stuff inside it at around 38 degrees F.

These are great conditions for seed storage! Shove those seeds in the fridge.

Well, no. Keep your seeds out of the higher-humidity crisper drawer, where you most likely keep your produce. But any other shelf should do nicely if you have the room. Keep your seeds organized so you can find what you need quickly when you are planting or starting something, and keep them protected in case your homemade ginger ale explodes in the fridge. Soaked seeds are bad.

Updated! How I Store My Seeds

Here’s how I store my seeds: it’s plastic in plastic, I’m just warning you, but it’s been the same plastic for about 10 years now, if that means anything. 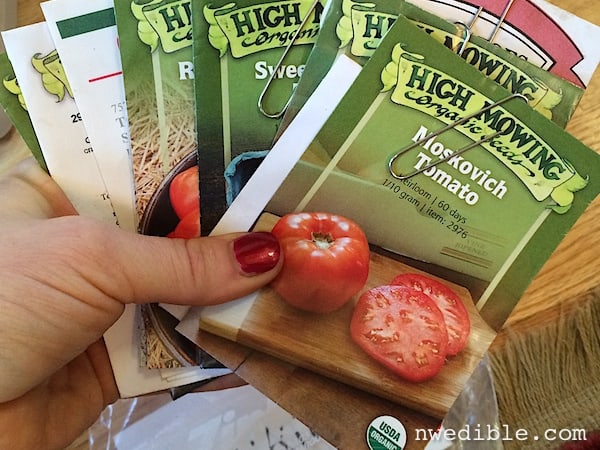 Each seed type gets slipped into a heavy duty ziptop bag. I make a label through an ultra-sophisticated technique called “Sharpie on Index Card.” I know, I’m basically Martha Stewart. That card goes into the front of each baggie as a label. If you want something more fun in your seed storage, check out Meg’s seed storage box over on Grow and Resist. 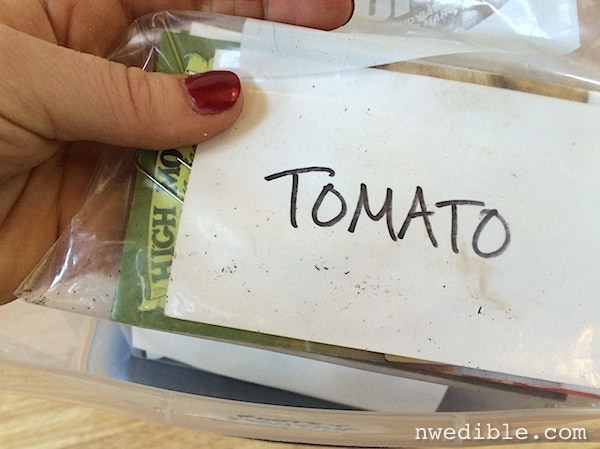 Each seed baggie gets filed according to my own internal logic in one of three plastic bins I had kicking around the house. One bin has summer season stuff and roots, one has brassica and greens and one has legumes and cover crops, which are bulky. 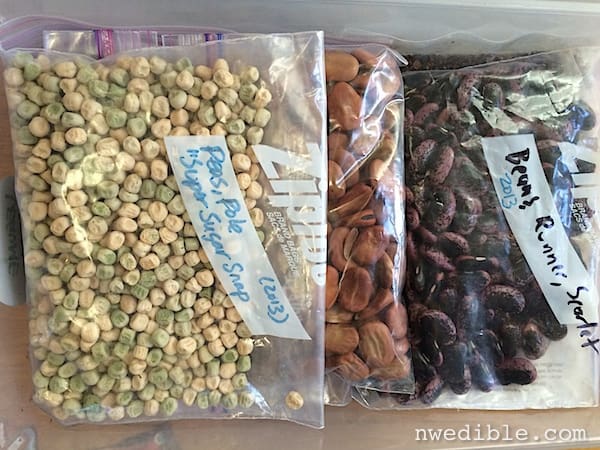 I started with one bin and then…well…things happened involving seed catalogs and my credit card I’d rather not discuss. Now I try very hard to limit myself to three, but sometimes I spill over into four bins. A shoe box, recipe card box or something similar would work well too.

These plastic storage boxes are just the right width to hold the seed baggies like file cards, and it’s fast to flip through and find what I need. When I need a certain type of seed, I pull out that baggie, sow what I need, and return that baggie to the box when I’m done.

The whole contraption gets stored in the fridge, which is really only possible because I have a second fridge in the garage where I store fermenting cabbage, slumbering seeds, and the occasional salted leg of pork. If I couldn’t store my seeds in the fridge, I would get creative with mason jars and desiccant and store them in the coolest room in the house. Eleven months of the year for me, that’s the garage.

I really like storing my seed packets in plastic bags. I sow a lot in the rain. I shove seed packets in my pockets. I’ve been known to toss a packet onto the soil while I look around for my rake or my seed-spacing stick. In other words, I live in Seattle, moisture happens and I’m not perfect. A layer of plastic gives my paper seed packets some extra protection when I’m working outdoors.

This system has reliably kept my seeds in good shape for about twice their “budgeted” life. In fall of 2011 I went through and tested and culled out my older seed. My oldest seeds were cabbage seeds from 2005. A germination test showed them at about 70% germination. I blended them into a saladini mix where less-than-perfect germination isn’t so critical and enjoyed the last of them as baby greens in a fall salad.

Don’t be intimidated by seeds. They’re no harder than buying starts, and in many ways they’re easier. Eventually you’ll find yourself so in love with them that you’ll probably have to build a database to keep track of all the seeds you have.

How do you use and store your vegetable seeds?