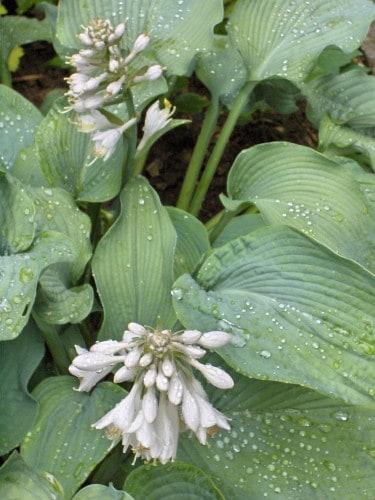 The very first garden I planted was an ornamental shade garden. I was very eager. I put in a little pond and a little waterfall powered by a cheap pump. I had some Big Tree people plant three mature birch trees for privacy, and in the partial shade beneath the birches I planted pink Japanese willow and hosta and nandina and ferns and azalea.

I bought little 4” pots of variegated ivy and encouraged the vine to grow up the half-rotten cedar planks of the old fence. I tossed down shredded bark mulch from a bag and congratulated myself on creating such a woodsy and naturalistic backyard.

My favorite plants were the hostas, so pretty and broad-leaved. The slugs liked them too, I found out, and I defended them with sticky toxic brown goo out of a squeeze bottle. Months passed and just as I felt like I had conquered the slug issue, something else happened. The hostas I had babied and nurtured and defended from pests started to yellow and die. The leaves started to fall off.

I panicked. I loved those hostas. I couldn’t let them die. I researched. It was crown rot, I was sure. Or I was overwatering. It couldn’t be too much sun – or could it? The hostas did get low angle direct western sun for about 45 minutes at the end of the day. Were they like old skool pre-Twilight vampires, burnt to a crisp by even a little direct sun?

Nothing helped. The hostas, every last one of them, withered yellow and died.

I ignored my garden for awhile. It had cheated me. It had been so nice and then everything I liked had died no matter what I did. I was petulant, and then dismissive. Holidays came and went and the calendar year turned over. It was too cold to go outside.

More months passed. It was getting warmer – it was spring – and sometimes I would stand on the deck that overlooked the shade garden. Something was happening out back, under the birch trees. Fat blueish-green spikes were poking up through the soil where the old dead hostas had been, a swirl of leaves wrapped tight into a spear of foliage.

I ran into the house and yelled at Nick with the wonderment of a toddler who’s found a caterpillar. “The hostas are coming back I think! They made babies! Or they weren’t completely dead after all! They are coming back!”

It was like magic. I was sure the plant was dead – I watched it die! – but then it rose from the grave, refreshed and newborn and bigger than ever, like some Easter miracle right in my own backyard.

And that was how I learned what a perennial was. There was no crown rot, no under or overwatering, no sun scald, no mystery fungus. The hostas succumbed that first year to fall, as they do – must do – every year.

It seems as silly as you can imagine, but I really just didn’t know it worked like that. I thought every plant was like the ubiquitous rhododendrons and other woody evergreens I grew up with: they got bigger and bigger until my mom declared them too big and hacked them down to stubs, whereupon they either started the process over again, from lower down, or died for real. I knew deciduous trees lost leaves and all that, but I didn’t know that there were plants that hid away completely as the curtain of their season closed.

I think that spring, when my hostas came back, was when I started to pay attention to plants.

Now non-woody perennials are some of my favorite type of plants. I feel a kinship with them. I think they show up to the giant plant party we know as summer, hang out, eat a little, drink a little, swap a few stories with the fast-growing, loud-mouth annuals, and then have to go hibernate for awhile because that much socialization is just exhausting.

That’s about how I feel about people, too. All my flesh-and-blood friends learn that sometimes I disappear for a few weeks or a few months at a time. I don’t return phone calls. I don’t schedule time to get together. I go to ground like a hosta in winter, pulling a quiet bubble of non-socialization around me like a shield.

I have friends who are like annuals: bold and bright and up front in the border, ready to take on the party at a moment’s notice. They could stay with their kind forever, blooming again and again, happy and thriving in the crush of warmth and constant, competitive companionship. They live in their current season, only worrying about where they have rooted for that moment, knowing new soil isn’t far away – just a seed’s throw, really. They only call it a night because some bitch bouncer called winter tells them it’s closing time.

But not me and not my perennials. We are happy to hand over the keys and head home early, to sink our roots ever deeper into the same place. We cycle through the seasons, poking our head up into the sun but then withdrawing in turn, grounded in place year-over-year, and relieved in the inevitable retreat.

When the perennial call to hide for a season rings in my ears, all the energy I have to be with others is given to the people who share space under my roof. There is precious little of me left over for even my most dear of my friends.

This probably makes me sound like a terrible friend, but most of my deepest friends are also introverts (some of us hide it in public better than others) and I think they hardly notice and rarely mind when I go to ground. If they mind deeply enough or often enough, eventually we have to stop being friends, because I can’t stop my cyclical retreat to quiet any more than I could stop my hostas from slipping back to the soil when the days cooled.

That’s just the nature of perennials.

I’m away from the computer a lot this summer, my friends. I appreciate your patience with a less-frequent posting schedule. I’m balancing time with my kids who are home for the summer, time in the garden, and time writing, and there aren’t quite enough hours to keep up the pace of posting I do during the school year. I know y’all understand.

Previous Post: « The Ugly Side of Urban Homesteading: Screening Storage Areas with Pallets
Next Post: Giveaway: Honeybee Democracy – For Beekeepers And More »