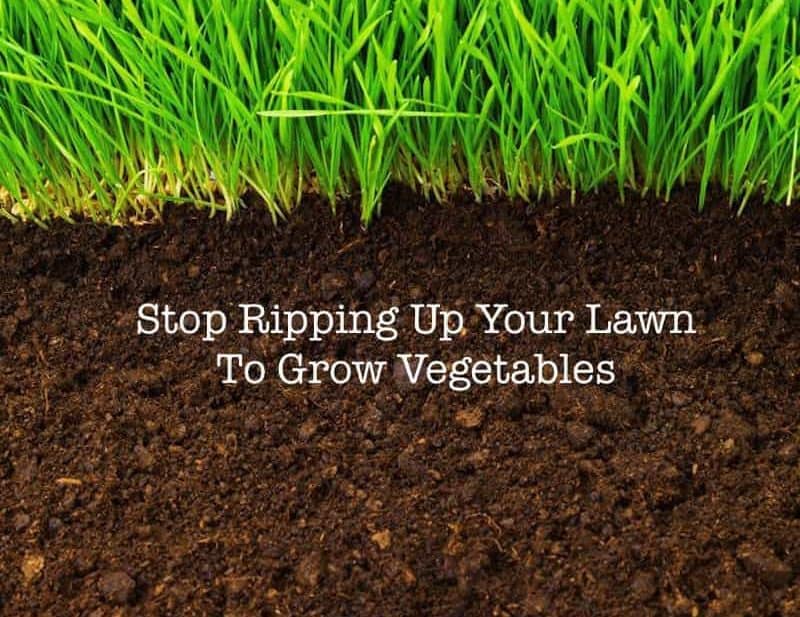 It’s a badge of honor among urban homesteaders to say, “I’ve ripped up my whole lawn and put in a garden.”

No, seriously, I would now like to explain why you should not actually rip up your lawn, and I’d like to start with a little soil science. Bear with me, this’ll be quick and you’ll thank me when you aren’t paying thousands of dollars in chiropractic bills later on.

There are different types of soils. One, called Mollisols is characterized by, “deep, high organic matter, nutrient-enriched surface soil between 60–80 cm [24 to 31 inches] in depth” and, “a soft, granular, soil structure.” Mollisols: the soil of your dreams. (Image: Wikipedia/Creative Commons)

Any gardener will tell you that two feet or more of soft, super-rich, high-organic matter soil sounds like a growers heaven. As you would expect, Mollisols are, “the world’s most agriculturally productive soil order [and] represent one of the more economically important soil orders.” (Wikipedia)

What does any of this have to do with your lawn?

Well, Mollisols weren’t born super-soils, they became super-soils. Mollisols typically occur under grasslands, such as the Great Plains of the United States. The most fertile kinds of Mollisols build up over eons from layer upon layer of decomposed grasses. Basically, the diverse grassland prairie grasses die back, thatch down, occasionally burn, and the masses of dead grass and dead grass roots decompose into the best soil in the world.

This is why Great Plains agricultural areas – before large-scale destruction of top-soil anchoring prairies through deep ploughing and hedgerow-to-hedgerow mono-cropping – were some of the most fertile growing spots in the world. The soil is Mollisols, a just-add-water dream to grow in.

Decades of unsustainable farming practices on this prairie land combined with a long, hard drought led to the Dust Bowl disaster of the 1930s. In some places over 75% of the deep topsoil simply blew away. (Yes, the best soil in the world, and it literally turned to dust before our eyes.) Today, of course, massive amounts of supplemental fertilization keeps these soy, wheat and corn growing areas commercially viable. Ponder too long on this and you might start crying, so let’s get back to your lawn.

I think you know where I’m going with this, right? Lots of organic matter on top of grass… And you were thinking you’d have to rip up the grass before you put in a garden?

Go ahead and put in a garden, but don’t rip up the lawn. No, instead, smother it. In doing so, you’ll be mimicking the best soil-building actions of nature and starting to turn your own little urban grassland into a teeny Mollisols which you can build on year after year, just as native prairies build their soil up year after year.

You’ve probably heard of sheet composting, lasagna gardening, grow heaps or hugelkultur. These are all slightly different variations on building a raised growing space from layers of organic matter that rots down right where it is, getting better and better as it composts in place. All these techniques can be implemented right on top of an existing lawn, to the betterment of the soil and the growing space.

I’ve never had lawn survive and grow through 10 to 12 inches of piled on compost, mixed mulch or other organic matter, but if you want to be extra sure your grass is well and truly smothered so it can begin to decompose into wonderful rich topsoil, lay down some plain cardboard over the grass before piling on your organic matter.

The best time to build up new beds (with rigid sides or without, as you prefer) is in the fall for planting next year, but a spring build can be done too. I’m currently building up three half-ass hugelkultur / lasagna gardening beds and will be posting soon about the process of creating them right over my lawn. I intend to have them planted this summer.

So save yourself some work and save your back from needless spasms – stop ripping up your lawn and start smothering it. It’s the natural, faster, easier way to make a garden, and it gives a better result. Don’t you love a win-win?

Previous Post: « You Know You're A Veggie Gardener If…
Next Post: The Real Bounty of The Coop (Hint: It's Not Eggs) »