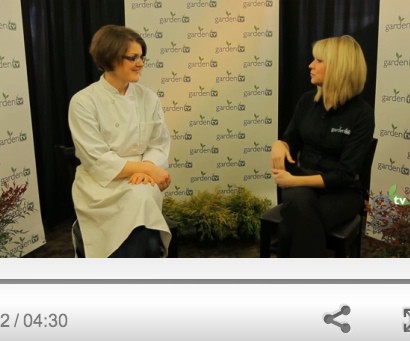 As you guys might recall, in February I spoke at the Northwest Flower and Garden Show. The show launched their new DIY Stage this year, and I was both thrilled and terrified to be the first person in the 25-year history of the show to do a cooking demo.

Newly-launched gardening website Garden TV showed up with something like five cameras to record my demonstration, Cooking Local In The Depth of Winter. I tried to act like this was totally normal for me (which of course it is not) and ignore the add-on terror of being recorded and just talk to the audience about veggies and cooking.

What I’m saying is, I have no idea how to be on camera. But the Garden TV people did a nice job of editing together my explanations, so all the recipes I demo’d live are now captured on film and actually turned out pretty good, I think!

So, if you didn’t make it to the Flower and Garden Show, you can see all the good bits from my Eating Local demo in the following four videos.

Original post for the mayo recipe here. The slaw doesn’t really have a recipe. I just kinda winged it because I had an extra few minutes at the end of the demo.

Garden TV pulled me aside after the cooking stuff and asked me what my deal and this blog’s deal was. So this is an interview of…me.

Previous Post: « How To Spot And Avoid A Crappy Seedling
Next Post: The Keep It Simple Guide To Cloches »