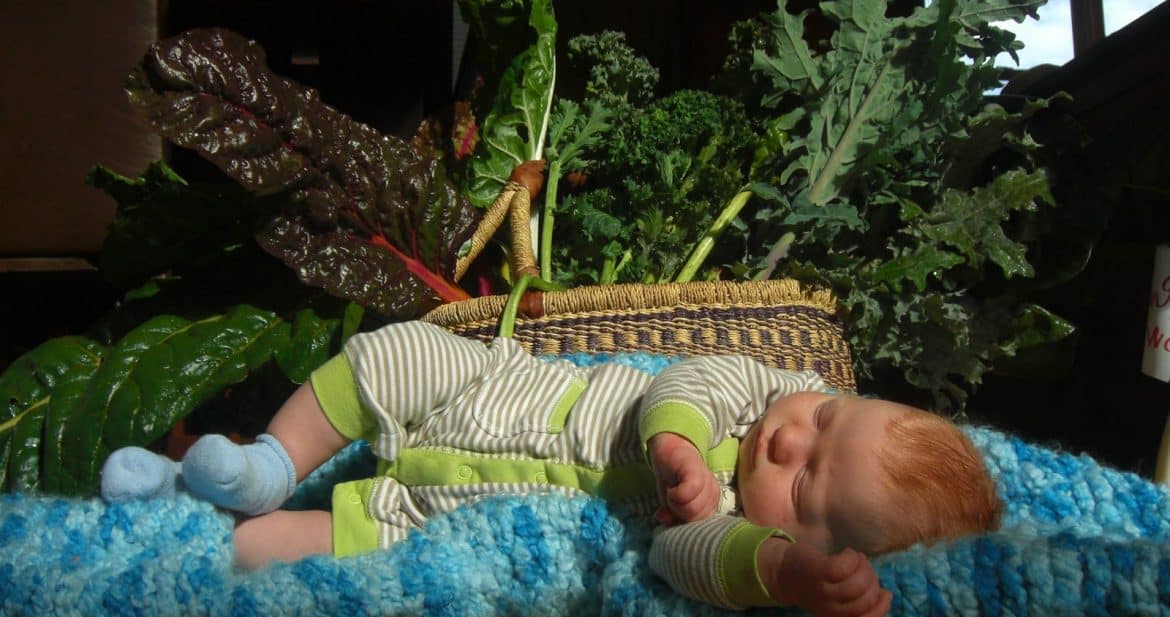 There’s this great podcaster in the farming/sustainability/permaculture field that I’ve listened to regularly for years. His name is Diego. D-I-E-G-O.

He has, I glean, a very motivated, type-A, get ‘er done, accomplishment-driven personality. He’s also the father to three young daughters. I’ve listened to Diego explain in emotional terms, with voice breaking, the very real conflict he feels between being a dad, and being a do-er.

I listen to him, and it just takes me back. I remember struggling in exactly the way he describes.

Like all parents, he knows there’s this ideal where you slow down, radiate constant availability, and move at the pace of a young child following a snail through the garden.

And then there’s reality. All the love in the world, but also…

So many conflicted feelings.

The delicate balance between being the parent you want to be, doing the stuff you need to do, and also checking off some of the things you just want to do can be hard to strike. It’s not, “childcare vs. career vs. canning” – that mischaracterizes this common frustration that Diego beautifully gives voice to.

It’s really a conflict between various needs that all deserve effort and attention, but which can never all be 100% satisfied at the same time. There’s the need of the child to be cared for, bumping up against the need of the parent for identity and reasonable self-fulfillment in their professional and personal endeavors.

Ka-boom: age old conflict. One of two things happens next.

1. Self actualization can wait, but changing diapers can’t. So our parent who finds joy in gettin’ stuff done, doing art, taking the chaotic and bringing it to order, gardening or whatever – he submits to the reality of having young children, shelves that part of himself for awhile, and quietly stews in frustrated tension.

2. Our Type-A parent attempts to keep everyone happy by being-all and doing-all, all the time. She becomes that horrid Doer ad made flesh: busy life, bustling kids, always there for the boss. She multitasks like a mofo while other stuff – sleep, a social connection, self-care or sanity – slowly slips away.

(There’s a third way, which is to simply slow down, do less, enjoy the moment, get help, recognize your self-imposed expectations are insane, and find a healthy balance point. It took surgery that really messed with me before I got even a tiny bit better at this. I have no advice on how to get there without minor medical trauma. Maybe try a meditation app or something.)

Either option leads to resentment or exhaustion if it goes on too long. Eventually our productive parent with young children will vent into his microphone or bang on her keyboard or scream into a pillow, “Why does everything seem so hard?!”

But it’s easier now. You know why? Because my children aren’t very young any more. I turned around three times and now my youngest is nearly 7 and my oldest is 13. A teenager.

Both of them can make themselves food, get themselves dressed, buckle themselves in the car, play unsupervised without getting themselves killed, and generally make their way through a day with very little micromanagement on my part. Both of them can wrangle chickens and a vacuum cleaner, and are required to prove it quite frequently. They are both capable, in an age-appropriate way, of fluently negotiating their environment.

I’m not trying to brag or claim my kids are perfect or that I know what I’m doing – it’s just that they aren’t babies or toddlers anymore, and that makes a huge difference.

I don’t want to sound like one of those obnoxious women who pats a new parent who hasn’t slept in 9,752 hours and says, “Cherish every moment, dearie – it goes by so fast!” But I would like to suggest that, with time, it does get easier.

I was cooking a frittata a few mornings ago. Mushroom, sausage and swiss cheese – delicious. The mushrooms needed thyme. Mushrooms always need thyme. So I turned to my son. “The tiny shrub outside in the front by the strawberries. It has little purple flowers and teeny, tiny leaves…go grab it like this, then take the scissors and cut off a bunch like this.”

Off Oliver went, and a minute later he was back, a perfect clump of fresh thyme in one hand, scissors held safely point-down in the other: “Here you go, mom.”

Later that day my daughter got hungry outside of normal family meal times. As a teenager she often rises later and eats on a different schedule than the rest of the family, which is fine with me as long as I’m not treated like the short-order cook. I came in from working on a garden project to find that she had sliced up some leftover roast chicken breast, heated some black beans from a jar in the pantry, and made herself an incredibly delicious burrito (I know because I stole two bites).

Bella’s 13. She can use the stove all by herself. I mean, look, I know this is not a big deal when you have older kids. But when she was two, I spent all day just ensuring she didn’t accidentally hurl herself into the grand abyss.

No one told me that in not that long she’d be all, “Oh hey mom, made myself a kickass burrito that required multiple steps including efficient utilization of leftovers, juggling of razor-sharp knives, and the mastery of fire. Wazzup wit you?”

She even cleaned up after herself.

So those of you with 2-year-olds, infants, little kids: I know you are in the trenches now. It’s survival mode. It’s one-minute-at-a-time mode, because taking things a day at a time is for some other lucky bastard who can plan that far in advance.

But your future is magic burritos you don’t have to make or clean up from. Magic. Freaking. Burritos. It gets so much easier.

Being there for your kids in the right way is still be a challenge as they get a little older, but when it comes to getting stuff done, my kids actually make my life easier slightly more often than they make it harder these days. And I also get to have these fantastic young people around who say really funny things – so a solid win when you do the full calculus on productive parenthood.

I think most of this is just the passage time, but if I could take a little credit, I’d like to think my own conflicted struggle between wanting to always be there for them but still wanting to check shit off my to do list actually provided a decent environment to encourage development of competent, age-appropriate life skills.

They were frequently hauled with me out to the garden or into the kitchen, and occasional benign neglect allowed them space to learn (relative) patience and how to deal with their own boredom.

Here’s my theory: the stumbling, bumbling, exhausting, frustrating, into-everything nature of young children is not a bug, it’s a feature. Kids instinctively want to be useful and important and valuable within their tribe.

They follow you around, always underfoot, always trying to

because they are constantly scanning for important skills to grab onto, observe, learn, repeat, and compulsively master. One day, they want to be big people in the tribe and that means watching how the current big people do their big people things.

When you bring them along with you – moving, gardening, growing, reading, cooking, making, doing, getting it done – and encourage them to bumble alongside, they internalize those skills as valuable.

I know it can be frustrating and I know it really slows you down, but I promise – turn around three times and you’ll be happy you took the bumble-along time when that time was takable.

For the stuff they can’t help with (and kids are more capable than we often give them credit for) well, good. They can internalize the skill of patience, and of respect for mom or dad when she or he needs quiet or space to do adult-work. That’s valuable and justified too.

Finding the balance point isn’t just about adult time vs. kid time – it’s also figuring out how to model an adulthood that is impassioned, committed, and productive with your children by your side. It’s not easy and it’s not simple. But the great news is, you don’t have to do it perfectly. You just keep trying, bumbling along together, day by day.

And then one day you will listen to Diego the podcaster, or read an article, or chat with a friend, and you will remember the feeling of urgency, that deep gut anxiety of not being on top of it, of being yanked in a zillion directions and never caught up.

But for the life of you, you won’t be able to remember exactly what it was you felt so behind on.

There will be a morning, a couple years from now, when Diego will call for his daughters, and one of them will be outside, gathering eggs all by herself. She’ll have heard the chickens ba-gawking and she’ll just go take care of them.

No one will tell her to, no chore chart will demand her participation. She’ll know how to be responsible and she’ll how to do the work. She’ll know, because she’ll have watched it done for years.

This is my message from your future: it gets easier, and it’s worth it.