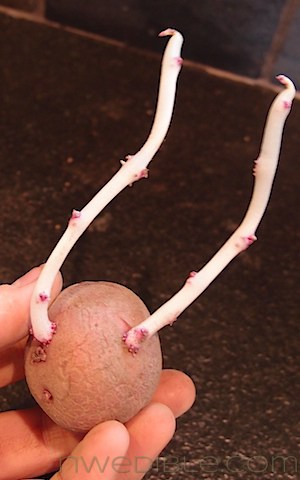 When I placed my order for seed potatoes with Irish Eyes this year, they asked when I’d like my potatoes shipped. Based on my zip code, they recommended a date a few weeks hence.

So my box of gorgeous perfect seed potatoes arrived and I set it carefully in the garage out of reach of the toddler, who thinks raw potatoes make a great chew toy. Then I promptly forgot about it for a few weeks.

When I opened my box of potatoes, most of them were expressing their conviction that it was indeed grow-time. They had sent out shoots, but because the shoots grew in the dark of a cardboard box they were pale and too-long and weak. They looked like bean sprouts. 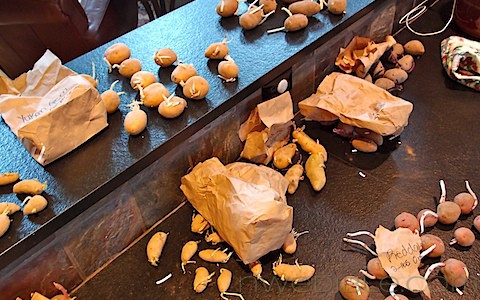 Some varieties were more eager to break dormancy and send out shoots than others.

Maybe a good choice for stem culture, but these shoots will likely break when I cover them with soil.

Now, my goal had been to chit the potatoes, which is grower speak for encouraging the potato to send out shoots from the seed piece before planting.

But these anemic shoots were unlikely to survive transplanting. Many of them were thin and brittle enough that just a small bump would snap them or rend them from the seed piece. 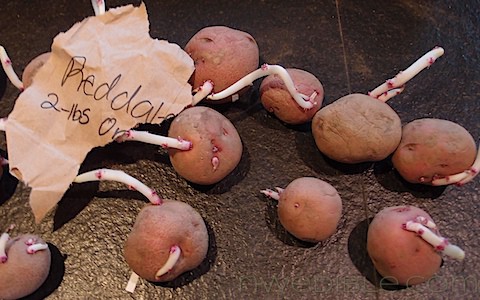 Many of these shoots are too fragile to reliably survive transplant. 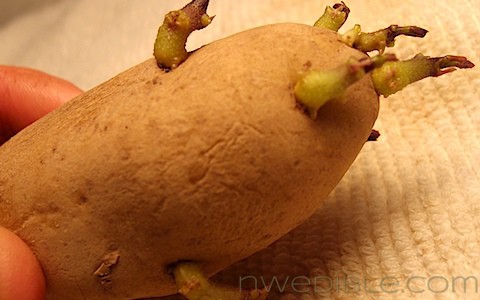 You want them to look more like these nice shoots developed on a fingerling.

The Problem With Weak Shoots

A seed potato is like your savings account when you are between jobs but still have bills to pay: only withdrawals, no deposits. Until the potato can get new leaf mass growing and establish a root system, all it has to live on is the energy stored in the seed potato. That energy allows the plant to send out these amazing shoots before it even has a root system.

But, by neglecting my taters, I allowed the seed piece to spend its valuable reserves on shoots that would, literally, never see the light of day.

It’s kind of like if, while on your no-job super frugal budget, you spend $50 on gas to get to a job interview only to realize your tank has a leak and within a day all the gas has dribbled out into your driveway. Not only have you lost $50 worth of gas, now you have to come up with another $50 so you can fill the tank again to get to that job interview.

And that’s the real problem with pale, weak shoots when you are chitting your potatoes. The potato spends energy to make them, but can’t benefit from them and so will have to spend yet more energy to make other, hardier shoots. It’s the opportunity cost.

To deal with the pale shoots of my potatoes I triaged the seed pieces. I removed the longest and weakest shoots from the seed potatoes. I set the unsprouted or only slightly-sprouted seed pieces aside on a counter where they’d be exposed to light. The potatoes with mid-range shoots I just exercised my judgement: if they looked sturdy enough to handle 3 inches of mulch dumped atop them, I left them.

As I was snapping off shoots that weren’t strong enough for reliable transplant, I told myself that by limiting the number of shoots on my seed potatoes I was potentially increasing the chance of larger potatoes at harvest time. Just like you can thin apples to encourage fewer but larger fruit, some of my research suggested you could thin potato shoots for larger tuber yield. I do not have personal experience with this, but if this crop of potatoes grow very large I’ll let you know.

Once you get over the psychological hardship of snapping a shoot off a seed potato, the act itself is very simple. Just rub your thumb over the shoot, or snap it back toward the potato. It will most likely come off cleanly. If I had an area with multiple buds, only one of which was overly long, I used scissors to snip that one off. 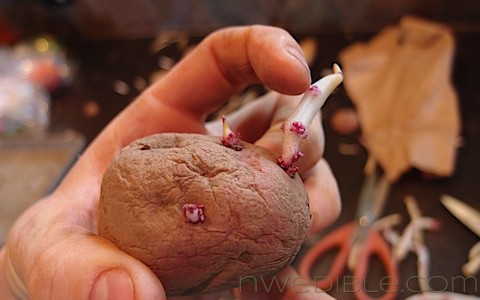 Snapping the longer shoot off but leaving the shorter buds. (Truthfully, this shoot probably would have transplanted just fine.)

After a few days in the light, the potatoes which were just starting to break dormancy were growing healthy, strong green-tinged shoots and those that had their overly-long shoots removed were looking fine too. A bit of energy was lost to the seed potatoes but otherwise everything should be okay. 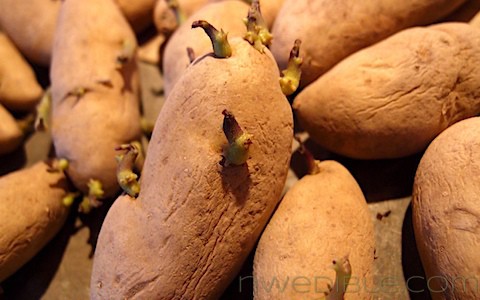 Within a few days in the light, all the potatoes were well chitted.

It seems there are as many ways to grow potatoes as there are gardeners. How are you growing yours this year?

Blog title I really wish I had thought of: You’ve Got To Be Chitting Me