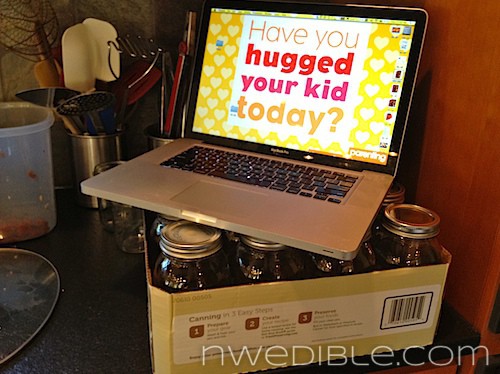 At this time of year millions of kids have to write essays entitled, “What I Did On My Summer Vacation.”

I thought I would write a grown-up version of “What I Did On My Summer Vacation” to explain what’s been going on in life beyond this blog. So, at the risk of getting all Opera Singer on you (you know, “me, me, me mee meee me, me, me!”) here’s a quick overview.

Snapshot of my life: attempted multi-tasking with laptop and canning jars.

Homebrew Husband quit his Super Corporate Job two days ago to work freelance and contract positions which will (hopefully) give him more time with the family and more flexibility.

We’ve been talking a lot over the past several months about moving to a more diverse, income-quilt style of earnings, and as part of that I’ve been working on getting more paid writing gigs. I have several in the pipeline, including three feature-length articles on contract for a few great magazines. I am very excited about this.

As you know, this is an ad-free blog. Many of you have been generous enough to directly support the info and edutainment and free downloadables here with a few dollars in the tip jar. Every dollar of those donations is an important part of the income quilt Nick and I are hoping to weave, but I personally need to step-it-up a bit in the take-home. So, rather than bring in ads on this site (ugh) some of my writing time has to go elsewhere, which means less posts every week on NW Edible. Until I have more hours in the day or more childcare things have to compromise somehow.

I had surgery scheduled for something non-emergent but needed-to-be-dealt-with in October. When Homebrew Husband opted to quit his job with its nice Corporate Healthcare to leap at a great contracting opportunity that came his way, I scrambled to see if it was possible to move my surgery up so that it could happen when we were still covered by low-deductable healthcare. It looked like that was not going to be possible, but at the last minute a cancellation opened up and I am now scheduled for surgery this Monday.

This means a whole bunch of time setting up logistics to get childcare and transportation worked out for my two kids because Nick, being in the “two weeks notice” phase of his out-going Corporate Job, really can’t take time off.  So, I’m finding people to take my daughter to the bus and people to cover shifts at my part-time job and people to watch my son for pre-op and post-op visits, friends to hang out with me in the days following surgery and help with my son…and all that normal stuff that goes along with scheduling medical crap. I’m just doing it on a pretty tight timeline.

Also in Health News, some of you have asked me what ever happened with my son and his possibly auto-immune related Magic Hypercolor Blue Hands and me and my definitely auto-immune related Thing That Needed A Double Biopsy. This doesn’t immediately relate to what’s going on right now, but this is probably as good a place as any to update you.

I took my son to see the regional experts in Pediatric Rheumatology and two kind and lovely doctors spent over an hour checking out my boy. He’s fine. He does not have Reynaud’s Syndrome as we feared (though even if he did it wouldn’t have been that bad). He was diagnosed with “confused veins.” Apparently, just like the rest of him, his blood supply system moves fast, and when he gets a little cold those veins overreact by closing down too quickly. But, no tissue damage is occuring when this happens and the prescription is to simply keep him in warm mittens if he goes out on a chilly day.

As for me, I started taking a handfull of nice hippie pills every morning including fish oil, vitamin D and turmeric and that seems to have done the trick because the external symptoms of my auto-immune thing just spontaneously resolved. Yay! 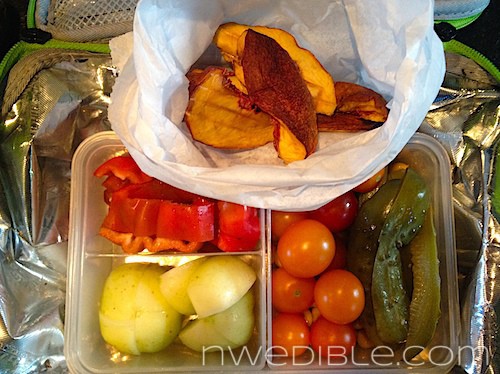 “Mom, can I have something more for lunch…anything that’s not vegetables would be good.”

Wow, back-to-school is a big transition! My daughter is in third grade which is surreal because I have such clear memories of my own third grade year. We weren’t the greatest about keeping an early-to-bed, early-to-rise schedule through the summer so getting back onto Bus Stop and School Bell schedule has been like a bucket of cold water on our heads every damn morning.

On a really positive note, I bought my daughter Story of the World on audio book for a back to school present. This is a kid-version of world history, heavy on the story-telling and mythology (the biggest complaint is that the author can get a little more excited about the story than about keeping her facts and dates straight). My daughter is an audio-book fiend anyway, and love, loves, loves this series. She listens to it 24/7 and asked me for headphones this morning so she could keep listening on the bus on her iPod.

She came downstairs the other day and told me, “Hey Mom, you know that guy Nero? He ruled Rome. Yeah. He was a TOTAL jerk!” Anything that makes history that compelling is a winner in my book. Highly recommended for homeschooling or afterschooling if you are comfortable with world history being presented as a fun story during your child’s first go-round with the information, knowing that the specifics will get filled in on subsequent passes. 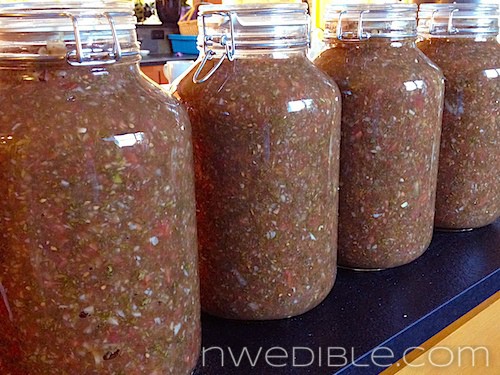 5 gallons of salsa is a lot of salsa.

Can-o-rama has continued. My head has been in a canning pot far too much these past weeks. More pickles, 5 gallons of lacto-fermented salsa, dried nectarines, dries pears, pear sauce, peach salsa, and more. Tomato paste (made with my free sauce method) is in the crock pot right now. Every day something is getting picked or preserved. Usually both. 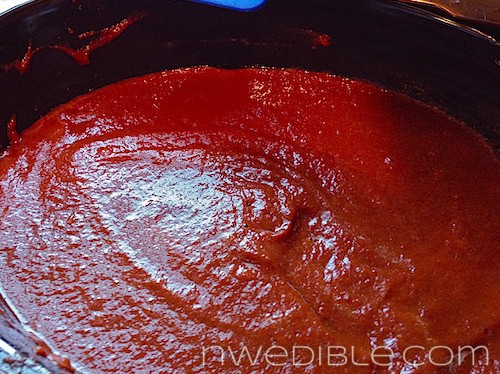 Tomato paste-to-be in the crock pot.

I finally opted to take this upcoming week off of additional food preservation and skip buying fruit from my normal farmers because I’ll be recovering for several days post-surgery and I don’t want anything rotting while I’m out of commission.

On top of everything, my boy turned two just a few days ago, my car was in an accident that totalled the vehicle in late June and my wedding ring was probably stolen in August. So I’ve spent a fair amount of time in the last several months dealing with the logistics of insurance reimbursement. With the exception of my son’s birthday, these things sucked. Hard. 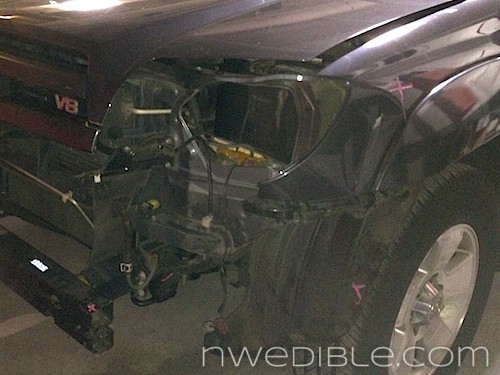 My son was not driving when this happened.

So, that’s what I’ve been up to. What did you do on your summer vacation?

Previous Post: « Half-Ass Earthquake Proofing The Pantry
Next Post: When and How To Harvest Broccoli and Cauliflower »