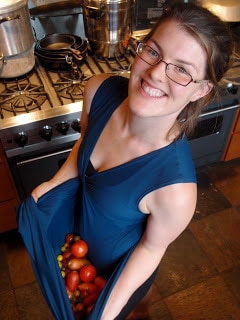 I love food, gardening and economics, so it follows that I’m interested in looking at gardening from an micro and nano-economic perspective. As someone who gardens on a scale large enough to make a pretty significant dent in our family food budget, my gardening hobby is intimately tied to our household budgetary realities.
So I suppose I could argue that my gardening is more than a hobby. Maybe it’s a hobby-job.When Nick and I talk about this we use the term negabucks. I think Nick made that word up. Negabucks means money “made” through not spending. Example: At the YuppieHippie Market, a good 1 pound loaf of whole wheat bread costs $4. At home, I make an equivalent loaf with $1 worth of flour, yeast, etc. Making that loaf instead of buying it has earned me $3 negabucks.
For now, ignore the energy cost of heating up the stove, just like you probably ignore the energy cost in driving to the store when thinking about how much a loaf of bread will cost you. It’s enough to think in broad strokes to get the general idea.
The problem with negabuck calculus is accounting for your own DIY labor. Let’s think of two women making that $3 negabuck loaf of bread.
It takes Sam an hour to make that loaf of bread, and she hates every stupid, sticky, dough-covered minute of it. $3 negabucks isn’t a very compelling reason for Sam to make her own bread. She’s probably much better served buying bread at the market or going paleo and having a lettuce wrap.
Helen adores making bread – making bread is a relaxing, soothing activity that centers her and gives her a real sense of accomplishment – she’d make a loaf of bread for free. Heck, if she didn’t need bread, Helen might still make a loaf just for the experience of doing so, and give it to her neighbor, Sam. If she did this, she’d actually lose $1 worth of ingredients, but that wouldn’t matter because her own bread making joy would far exceed the $1 ingredient cost.
The same hour spent doing the same thing is accorded very different value by Sam and Helen.
Which brings me to the million dollar question: “Is gardening worth it?”
I get asked this a lot. People want to know if they can save money growing their own food. The answer is: “Yes, absolutely!” if you feel Helen-ish about gardening. But it’s: “No, it’s probably not worth it,” if you feel Sam-ish about grubbing in the dirt.
Last year in January I started tallying up the value of what I harvested. I stopped in May before the bulk of the harvest even happened (I learned it’s a pain in the ass to weigh everything you harvest), and was already at over $400 profit. If you factor in the value-added products (bread, canned peaches, yogurt, jams, granola bars, frozen berries, etc.) that I make routinely, I am confident that my hobby-job nets the family at least $6000 negabucks a year.
However, I spend at least 20 hours a week planning, planting, weeding, harvesting, preserving, cooking from scratch, making the bread and yogurt, etc. to make that happen, so my nega-buck wage is probably a bit under $6 an hour.
Is that worth it? To me, absolutely, or I wouldn’t do it. (Plus it keeps me out of therapy.) Other people, non-gardener-types, would feel very differently about that work-to-reward ratio, and who could blame them? You couldn’t pay me $6 a hour to play video games for 20 hours a week, yet many people would kill for that job.
So, does your time in the garden pay, or does it even matter to you?
0