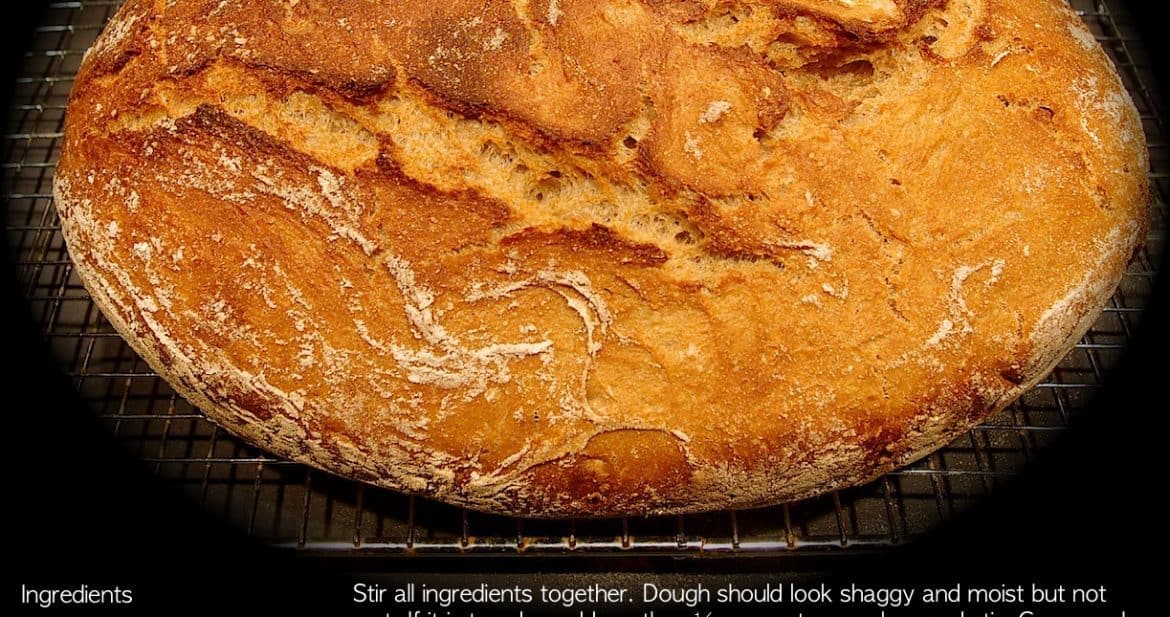 There’s about a 95% chance that you’ve heard of the famous No Knead Bread recipe, put out by the New York Times and re-posted by…well…everyone.

For the 5% of you that have yet to become master No Knead Bakers, I offer up my personal lionization of the technique. It’s simple, it’s fool-proof, it’s delicious, it involves extended soaking of the flour which may help to mitigate grain phytate concerns and it will free you from $5 a loaf artisan bread at the YuppieHippie Market. What more could you possibly want?

The standard No Knead bread recipe linked to above is a fantastic place to start. I made the base-line No Knead Loaf once and was sold on the concept. Since then I have tried out multiple variations and developed my own “standard.” This recipe is very accommodating, and as long as you don’t diverge too much from the flour-to-water ratios you should be fine.

My standard loaf is a double batch made with 1/2 whole what and 1/2 bread flour. (Update: I now make almost exclusively a 100% whole wheat loaf because I’ve stopped keeping multiple flours on hand.) Here’s how I do it. 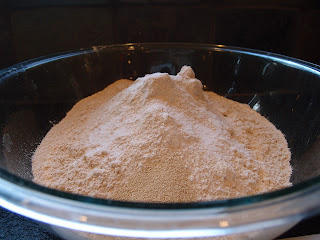 Add in any dry flavorings or herbs. Here I used chopped fresh rosemary. 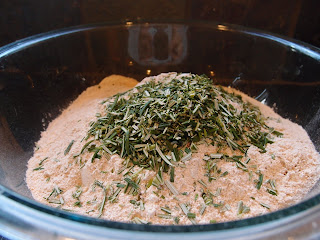 Add in a shy 3 1/2 cups warm water. (Update: I now use some combination of water and whey from thick-style strained yogurt or cheesemaking. I prefer loaves with as much whey as possible for the tangy flavor and longer keeping quality. Even 100% whey works, but a little is fine too.) Stir until the dough is a shaggy mess. At this point, you can add in “wet” flavorings, like chopped kalamata olives, capers, walnuts, etc. Make sure anything that might release liquid into the dough is thoroughly patted dry. Cover with plastic wrap and let sit 12-24 hours (Update: 12-24 or even longer. I’ve pushed this dough to 48 hours and it’s tangy but still good.) Overnight is a good rule of thumb. 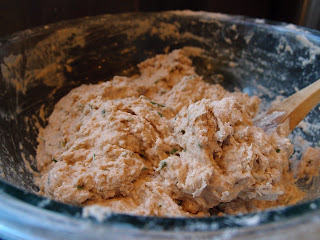 The dough will swell up and become spongey. 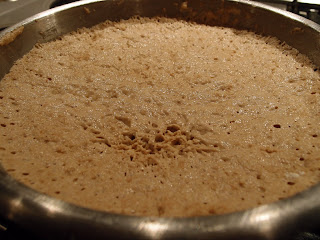 Stick a lidded cast iron dutch oven in your oven and preheat the oven to 475-degrees. (Update: I generally bake my loaves at 450 now.) Then, while the oven pre-heats, flip the dough out onto a floured surface and pat it into a loaf shape. (Update: I totally skip the rise step now. I just turn the bubbly dough into a ball as best I can right in the bowl and dump it into a floured cast iron dutch oven.) 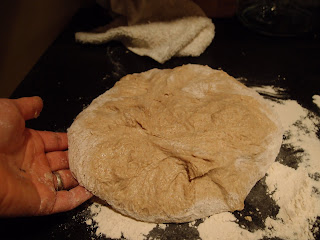 Let the loaf shape rise, covered with a tea towel or the original piece of plastic wrap, for about 45 minutes, or until the dutch oven is really hot. (Update: Again, I now longer bother with this step.) 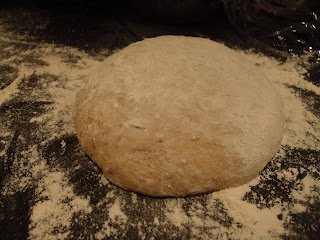 Quickly remove the dutch oven from the oven, remove the lid and dump the dough into the dutch oven. Alternately, I have discovered the pat-shape-re-raise step is optional. You can dump the spongey dough directly into the hot pan with very good results. You’ll miss out on the pretty flour-coating, however, Try it both ways and decide which you prefer. 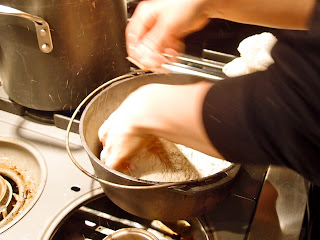 Don’t worry about your dough being pretty in the dutch oven. It really doesn’t matter. Re-lid the dutch oven and stick the whole thing back into the oven. (Update: this is where you should sprinkle some coarse grey salt on your loaf of bread. Even a bit of kosher salt makes a great crust.) 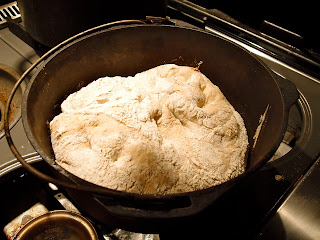 Bake for about 45 minutes (Update: 30-40 minutes), then quickly reach in and remove the lid to the dutch oven. Bake for another 30-45 minutes, until the crust is a deep brown. (Update: I have found that you don’t need to keep the lid on as long as I’d initially assumed. Anything after about 30 minutes of lid-on time works for me, and in a way I don’t quite understand, the lid-off time seems to be about the same, 30-40 minutes) 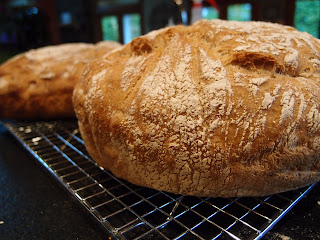 Serve warm, ideally with butter. This recipe gives you artisan style bread with an excellent crust and a textbook crumb. And all you have to do is remember to mix some flour and water and yeast before you go to bed. (Update: butter still excellent. No change there.) 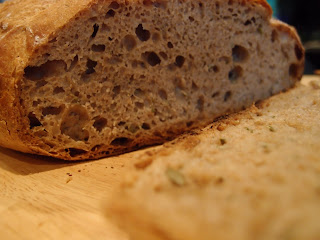 I have made this loaf with varying amounts of whole wheat flour. 100% whole wheat gives you a nice, hearty, dense loaf. All white flour gives you something more akin to a french loaf. I have come to prefer a 50%-50% blend, but this is a very simple recipe to modify and somehow it always turns out. (Update: I believe adding whey to the 100%whole wheat dough and extended rise times keeps the loaf quite excellent in texture despite the lack of white flour. Or it could be I’m just used to a heartier loaf.) My current favorite variation is 50% whole wheat with rosemary, kalamata olive and grey salt sprinkled on top, but a straight bread-flour version is quite celebratory too. (Update: I haven’t changed my love of the salt crust. That totally stands.)

(The take home to all these updates is that this base recipe can be made your own and modified in countless ways. I’ve been playing with this same basic ratio of flour to liquid to yeast to salt for several years and every loaf I get a little closer to an easier way to make a tastier loaf. I have used this same dough for skillet fry-bread, pizza dough, pita, focaccia, and even rolls – best done in muffin tins – and everything kinda works. It’s not exactly like traditional pizza or pita dough or what-have-you, but having a bowl of versatile dough sitting on my counter has saved my butt at more mealtimes than I can count. I still love this recipe. It’s really quite fool proof, even when you fool with it!)

It you haven’t yet joined the cheer squad, try out a loaf of No Knead Bread and see what all the fuss is about. If you have tried this recipe, or one similar, what do you think? Am I the only person out there filling the bread need with no knead?

Previous Post: « Of Watts and Watt-Hours
Next Post: Let's Call It A Vacation: The Mother Earth News Fair Getaway »