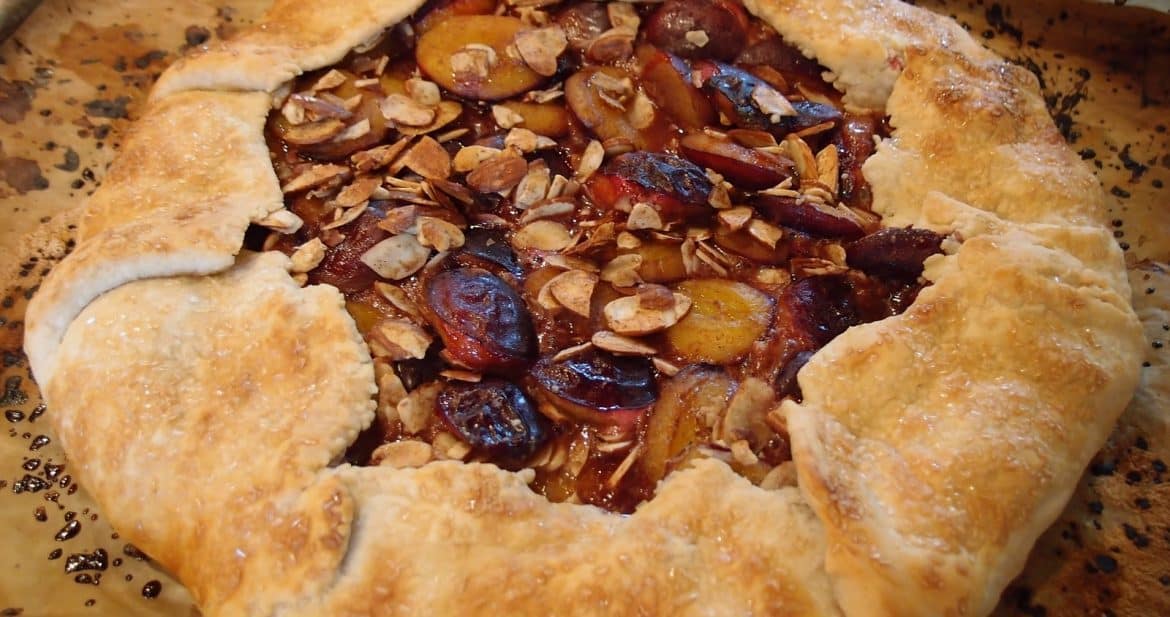 You know how people say “easy as pie,” when something couldn’t be simpler? Well, sorry pie, there is something simpler, and tastier: the galette. 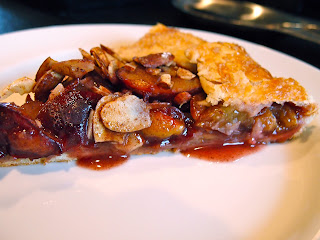 Oh, sure, you might argue that a galette is just a French pie, and in a way you’d be right. But this flat, simple, rustic (galettes are always described as rustic, which I find irritating) fruit tart manages to capture all that is good about pie while leaving all the fiddly parts behind.

It is an annual tradition in my home to make a plum galette with the harvest from our plum trees. Because our mature Italian Prune Plum trees came with the house, they were the first edible we ever harvested. We picked them before we had even moved in to our house, actually.

But the galette concept, like pie or crisp (the only dessert easier than galette, come to think of it) will adapt to just about any fruit, and a fair number of vegetables too. Deeply caramelized onions, seasoned with thyme and liberally spiked with blue cheese, baked galette-style, is culinary heaven in late fall.

Galette Crust (this is the only part where I measure):

* You can substitute and equal amount of butter or shortening for the lard. Butter will give you a crust that’s a bit harder to work and won’t flake as well. Shortening will give you a crust that explodes when you bite into it, totally destroying the inside of your mouth. Okay, not really. I made that up. But unless pork-free culinary restrictions play into it, I highly advise lard.

Method
Add cubed butter and lard to the bowl of a food processor fitted with a metal blade. 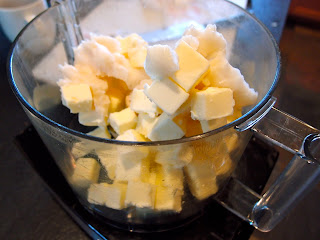 Add flour and salt and pulse to combine. 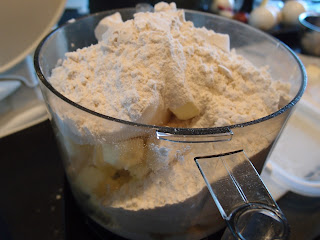 The goal is “dough” with the texture of fluffy cornmeal that still has pieces of lard and butter in it. Pieces of fat up to the size of peas are great. 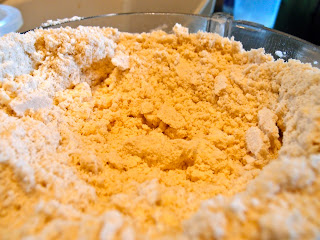 Add the ice water to the dough and pulse several more times – just so that everything starts to stick together in larger chucks and when you squeeze a piece of dough between your fingers it holds together. The dough will not at any point form a ball. 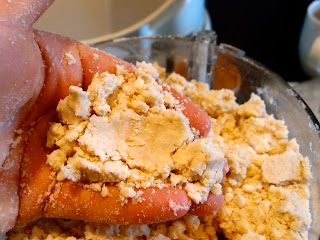 Divide dough into two pieces if you want huge galettes, or four if you want more reasonable size ones. If you cut a cross-section of the dough you can see the visible flecks of fat through the dough. 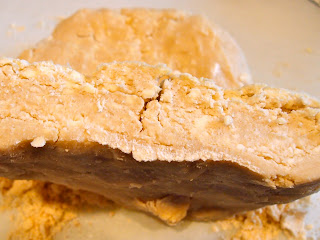 Wrap dough in plastic and chill at least 30 minutes. You can also pop it into the freezer for a few months if you’re a plan-ahead type. 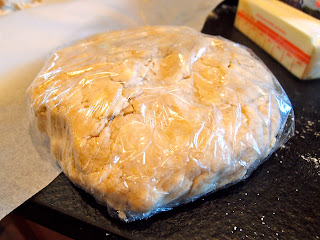 Galette
(for 1 large galette – 1/2 recipe of crust – serves 8)
You do not need to be precise with this. Change the spices, increase or decrease the sugar, leave out the almonds, use plums or apples or pears or peaches based on what is in season – what you like will work.
1/2 recipe crust, from above
8-10 cups halved plums
1-2 cups sugar, depending on desired sweetness
2 tablespoons cinnamon
2 teaspoons kosher salt
1/4 cup flour, a bit more if the fruit seems quite juicy
2 cups sliced almonds
1 egg, lightly beaten OR several tbsp cream or milk (for egg wash, optional)
1/4 cup Demerara sugar (for egg wash, optional
Combine plums, sugar, cinnamon, salt and flour. Toss until sugar and flour mix with fruit juices and dissolve. Add in almonds. 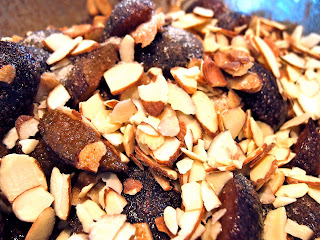 Get your dough out and let it thaw to cool but roll-outable temperature. 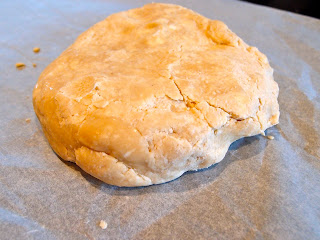 Here’s my best tip for making galettes: roll the dough out on a well-floured piece of large parchment paper. This makes it easy to transfer the entire large crust to a sheetpan. The fat-to-flour ratio in this crust is designed to handle flouring the surface during rolling, so don’t go insane with flour, but don’t feel bad about using enough to keep the crust from sticking, either. 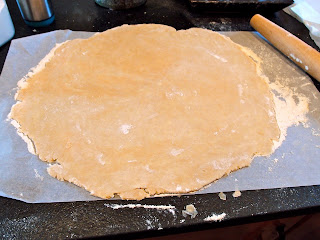 Slide the dough on the parchment onto a sheetpan. 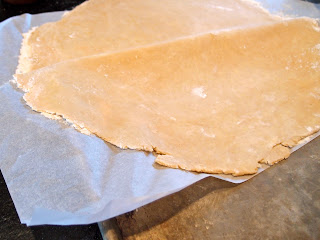 Pour the filling into the center of the galette, leaving a 2 or 3-inch border of dough all around. You want roughly a single layer, maybe a little thicker. Do not spend 45 minutes arranging your fruit in perfect concentric circles or some such crap. That’s for restaurants to do. Hey, it’s a rustic dessert, right? 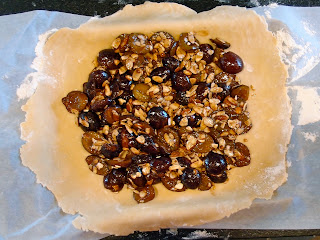 Fold the edges of the dough gently over the filling, overlapping so that the entire edge of the galette is enclosed and seamless. 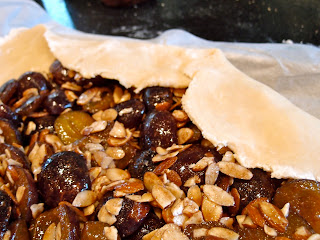 If there are any holes or tears in the dough, the galette juice will leak out so try to be gentle as you fold each edge up-and-over. 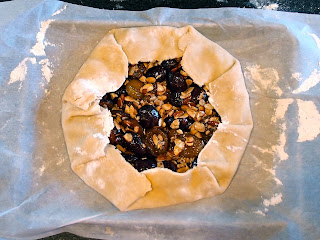 To make the crust extra fab, brush it lightly with egg, cream or milk and then sprinkle with the Demerara sugar. I keep this large-grain, crunchy sugar in the house entirely for this reason. 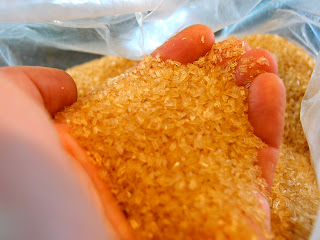 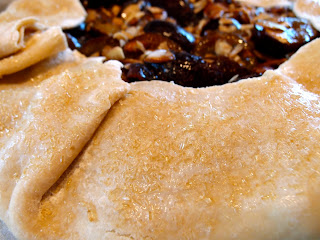 Bake at 400-degrees for 30-40 minutes, until the galette crust is golden brown and crisp and the fruit is tender with bubbling juices. 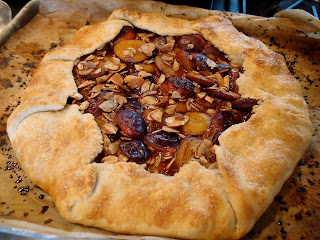 Let cool as long as you can (say, 14 seconds) and then cut yourself a slice. 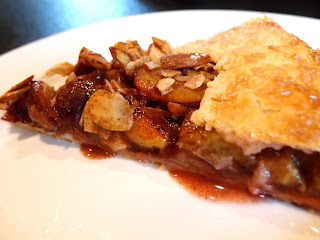 A slice of my annual plum galette and a cup of black coffee is my reward for climbing two trees to harvest the plums. Hah! As if a grown woman climbing a tree isn’t reward enough. Still, the galette is a beautiful way to pause the day. 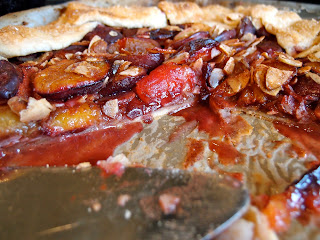