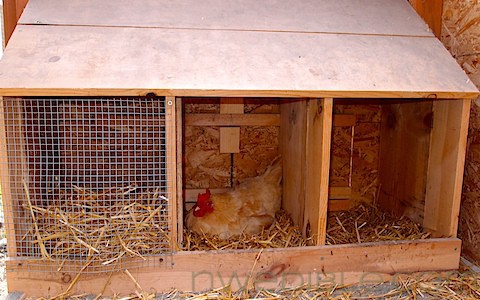 The nesting box is a pretty important part of the coop – it’s where the chickens, hopefully, lay their eggs. Our nesting box has seen a couple of modification lately. One worked. One really didn’t.

Let’s start with the failure, shall we?

In an effort to turn more of our waste stream into something useful I had this idea that I could use shredded junk paper for liner box material. 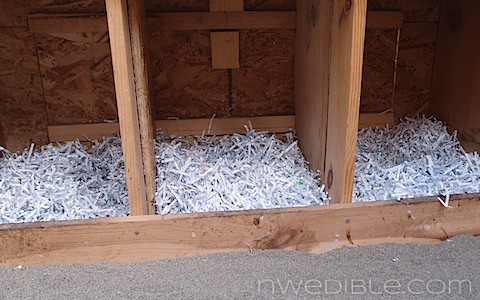 Well, it didn’t work. As one reader warned, the shredded paper stuck to the eggs. Did you know that when an egg is freshly laid it’s covered with a wet “bloom” that dries almost instantly and protects the egg interior from contamination? Well, if in that instant the egg is laid onto printed paper, the ink will transfer to the egg and the paper strips will stick to the shell.

This in itself wouldn’t have been a deal-breaker for us, because we aren’t selling our eggs or anything, and a little confetti with our breakfast is kinda fun, in some ways.

The shredded paper also had a tendency to migrate everywhere…it would blow out of the coop when I let the chickens out and little pieces of it would drift onto the white currant bushes. Pretty soon the area around the coop looked like it had been TP’d by disrespectful little 2-inch tall fairies.

If the lip of our nesting box was several inches taller this problem could have been mitigated. I thought about yet more coop tweaks but in the end swapped the nesting box material back to straw and didn’t look back.

About a month ago we had some problems with a few of our chickens being total bitches picking on one of their sisters. I modified one of the never-used nesting boxes (they have three but only ever use one) to hold the picked-on hen in isolation while she healed. 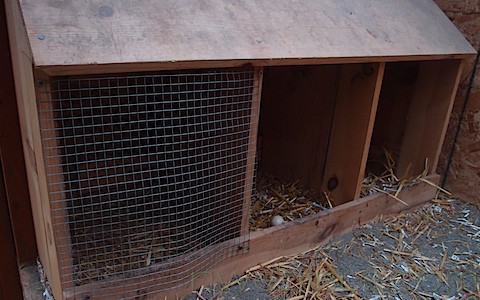 It was a simple thing to smack some screen up on the front of one of the nesting boxes, and it did keep the injured chicken isolated, but I felt far too guilty keeping a hen in that small a space for longer than a few hours, so we quickly abandoned the confinement box idea.

Some days later I was gathering eggs and realized that the blocked-off nesting box would make an excellent place to store back-up liner material for the nesting boxes. Periodically, because the chickens kick enough straw out the nesting boxes to reveal the bottom, or because an egg gets broken in the box or the liner material becomes poopy, nesting material needs to be replaced or topped-up.

So, from the outside, egg-hatch side of the nesting boxes, I shoved the blocked-off nesting box full of straw. 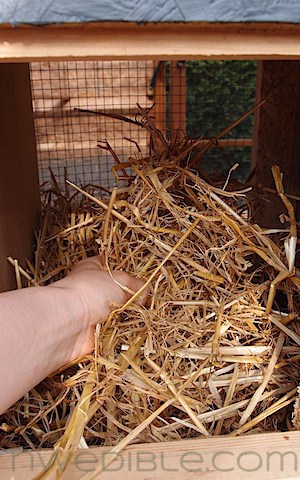 The mesh at the front keeps the back-up straw in place and keeps chickens from soiling it.

It is ever-so-easy to grab a handfull of straw to top-up the nesting box liner material when it is right there at the ready. When I’m harvesting eggs I just open up the egg-hatch, grab a little extra straw if needed, and move it to the nesting box. Because it is so simple and convenient to keep the nesting material clean, dry and plentiful, the eggs stay a lot cleaner.

Previous Post: « Your Seedlings Hate Your Fancy Window: How Plants See Light
Next Post: Side-Dressing: A Feeding Strategy For Plants and Kids »