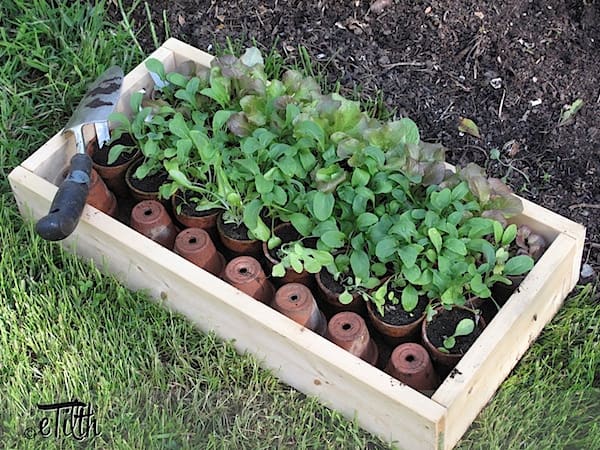 If you’re like me, you’ve been drinking Erica’s (spiked) kool-aid. You plan on feeding your entire family with intensive vegetable gardening techniques, gleaning weeds from the neighbors, and only eating seasonally within 100 mile radius. You can probably debate the finer points of Square Food Gardening vs. the French Intensive method.

My kool-aid was red (and served in a wine-glass). I ripped out the lawn and nagged my spouse into letting me build the chicken coop. I made a seed order spreadsheet, my planting plan, my sowing schedule. I coaxed the tender seedlings along in April, not daring to throw away even the meekest of starts. I selected Roma-style tomatoes for sauce, ‘Brandywine’ for backyard burgers, and way too many ‘Sun Gold‘ seedlings. I edged the rows with marigolds, and inter-planted chives with the carrots. I had season extenders and bean trellises set up as soon as the smallest start went into the ground.

What the hell was I thinking? 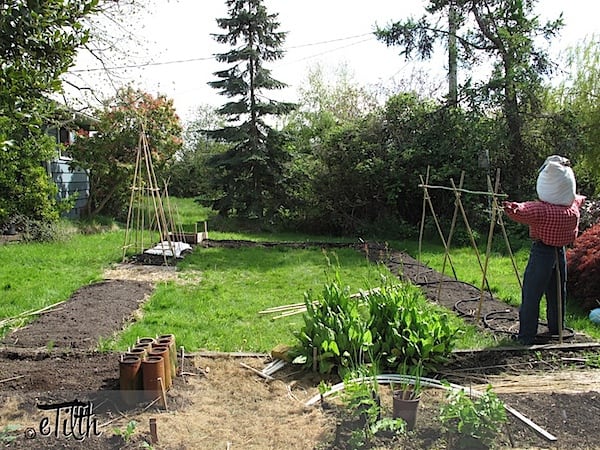 I won’t bore you with my epic failures – the pea-weevils, the tomato jungle, the post-vacation crispy garden, irregular and inefficient watering, arugula-haters, and a glut of beans (almost enough to fill one basket). None of my ‘crops’ produced sufficient amounts to achieve food-security; at best I could produce a meal. Let’s face it, I can’t realistically subsistence farm in my tiny vegetable garden.

The best estimates for self-sufficiency suggest one to two acres. I am the proud owner of a 150 square foot “farm”.

Last year, when I realized the insanity of trying to achieve impossible vegetable self-sufficiency, I reduced my vegetable garden by half in order to add straight, wheelbarrow-width paths for efficient compost rearrangement. Now I can get to the new chicken coop in the rain and pick chives for breakfast without full foul-weather gear. I grew lettuces, tomatoes and potatoes for the table, and put in dahlias and sweet peas for my soul.

I say it’s time to rethink backyard farming. No more unobtainable Urban Homesteading™, no mini farms, not even micro farms. Just growing what you can, growing what you love, and letting someone else do the rest.

Here are my top choices.

There is nothing better than a home-gown tomato. But the best tomato is the one that doesn’t even make it into the house. It’s the one with the juice running down your kids’ cheeks, the sun-kissed candy you pop into your mouth one by one as you lay flopped on the lawn staring into the blue sky.

Forget trying to get 40 lbs of ‘Stupice’ or Roma tomatoes to ripen on canning day. Rely instead on bulk-buys organized by like-minded urban farmers. The Seattle Farm Co-op is my go-to group, or you can find one using the Local Harvest directory. That box of tomatoes that I put up as spaghetti, and spicy Indian masala sauce is long gone by February so I’ll need 80 lbs this year.

The delicious slicer tomato for your burger? Get a perfectly ripe heirloom from your Neighborhood Farmers’ Market instead. My favorite market is in Ballard because I shop on Sundays, but you can easily find others in your area through Local Harvest.

Can’t resist growing your own? Then hands-down, choose the cherry tomato, ‘Sun Gold‘. It is reliable in our climate, and never makes it into the house. It’s an indeterminate variety, so build it a trellis and let it climb, and remember that they won’t all ripen at once. 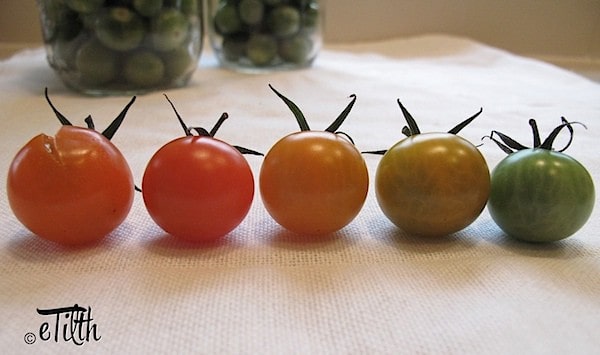 Sun Gold Tomatoes: I tried pickling the green ones (yuk!)

This is where you detailed, analytical types get to geek-out by planning succession crops and season extenders. For spring, start with ‘Forellenschluss’. You’ll also find this advertised as ‘Freckles‘, and ‘Flashy Trout’s Back‘, but it’s the same red-splashed lettuce.

I like this variety because you won’t find it at your grocery store, and probably not even your farmers’ market. Start seeds in mid-February on the windowsill, then transplant out with row covers in March (My sea-level Seattle garden has a last-frost date of April 4th). You’ll want to start three to four plants every two or three weeks in the spring (remember to be ruthless in discarding feeble starts). Sow this variety again in late July and August for your fall crop.

Follow the spring lettuce with ‘Jericho’, sowing in April-June. It’s a heat-tolerant variety of Romaine developed in Israel. It has good flavor and doesn’t taste ‘tough’. Because it is very upright in habit, you can use it as a cut-and-come-again variety. Start three to four plants every week to ten days in the summer.

Finally, in September and October, sow ‘Winter Density‘. It’s another Romaine type, with a tight head. The lower leaves won’t flop into the dirt and become slug-condos. This one should keep most of the winter under sturdy row covers, but plant six to eight plants because they grow more slowly in winter. High Mowing demonstrates the reemay-fleece with polythene high-hoop tunnel combination, but you can be successful with a fleece/low-tunnel version in your backyard.

This is where the backyard garden will really excel, and maybe even make financial sense. Grocery-store herbs are expensive, and frustratingly, don’t stay fresh very long. Select herbs that you like and succession sow parsley, cilantro and chives in blocks every three weeks. I put radishes into this category because they mature so quickly, and you can inter-plant them among the lettuces. Sow as much arugula as you can; they’re better than sprouts on your sandwiches, no matter what your kids say.

Don’t bother with planting basil in the ground; it’s too cold here. Instead, buy one fresh $4.00 packet of basil at the grocery store. Gently snip off the bottom centimeter of each stem and the lower leaves. Put each stem in a jar of water on your windowsill, with the leaf junction below the water line, and it will form roots. Make sure to change the water at least weekly. You should be able to grow and eat that small purchase for many weeks.

Make the most of your vegetable garden space by tucking herbs into your flower garden, and save even more space by planting oregano, thyme, mint and rosemary in pots. Although they are tough, make sure they get adequate water. 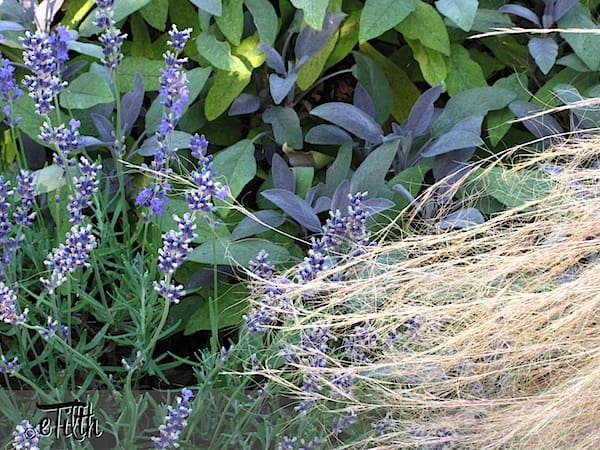 Lavender and Sage in a Culinary Garden with Stipa tennuissima

I really don’t recommend trying to grow space-hogging early-, main- and late-crop potatoes, or even my favorite Yukon Golds. These potatoes are reliably available at grocery stores and farmers’ markets. Instead, I grow Makah Ozette potatoes, a rare local heirloom potato that was available briefly until a crop failure, and is in danger of extinction.

The Makah Ozette potato is the only potato to be brought directly from Peru to Washington, and not via the Old World and back again. It has been grown in WA continuously for over 200 years. I bought a $7 sack from an independent garden center and continue to grow and save this unique potato. It has a thin bumpy skin and a delightful buttery flavor best enjoyed roasted, with a pinch of salt. Beans and peas can take over your garden. You can discuss the merits of bush and pole beans and purple-podded vs. green-podded, edible vs. shelling peas and you’ll never decide what is the best. In my opinion you can get shelled frozen peas with decent flavor at your grocery store, and delicious green beans at the farmers’ market.

Don’t bother trying to grow drying-beans … just get them in the bulk aisle. But, if you have to have a bean or a pea, choose one you can send your kids out to pick, and not mind if they don’t come back with any. I typically grow ‘Cascadia‘, a snap pea that you can eat directly off the vine. Plan on growing one up a tower with climbing Nasturtiums like red ‘Spitfire‘ or yellow ‘Moonlight‘. The spicy Nasturtium leaves and flowers can end up in your salads, you can even pickle the seeds.

Fugeddaboudit. You can’t grow a variety that isn’t available locally, and you really don’t have the space. Unless you put it in your weird stuff category.

This is the part we forget, when we become subsistence farmers. No room for flowers, right, unless they are companion plants or medicinal? WRONG. The older I get, the more I realize that I have to grow for the soul, as well as for the stomach.

I cringe at the prices of flowers at the market. Instead, I urge you to plan a cutting garden, so that you can have 52 weeks of flowers on your table. Last year I grew dahlias for the first time in the vegetable garden and they were spectacular. I’m moving them into the mixed border this year, now that I know how much water and sun they need (lots of both, but with good drainage.) 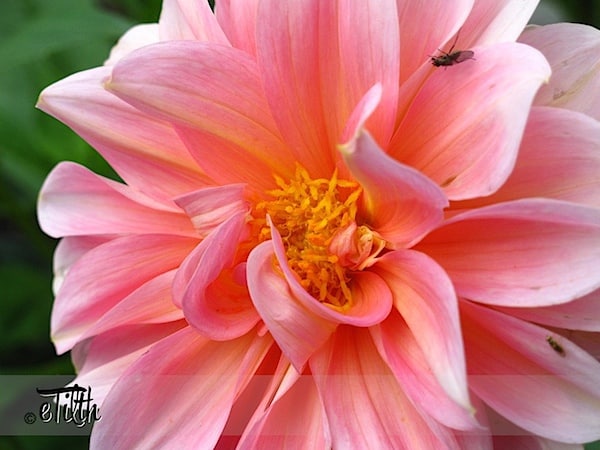 I also have been growing a fragrant heirloom sweet pea variety ‘Black Knight‘ for several years. Seeds you’ll buy in a packet are called F1 and will be uniformly dark. The next F2 generation will show the variation in its parentage. I’m playing with some backyard breeding and marked the darkest stems with twist-ties and saved seeds. I’ll let you know what the F3 generation looks like. Sow the seeds in September and overwinter in a protected area, or just sow them right now. I’m sure you can find a fence post or trellis for these. 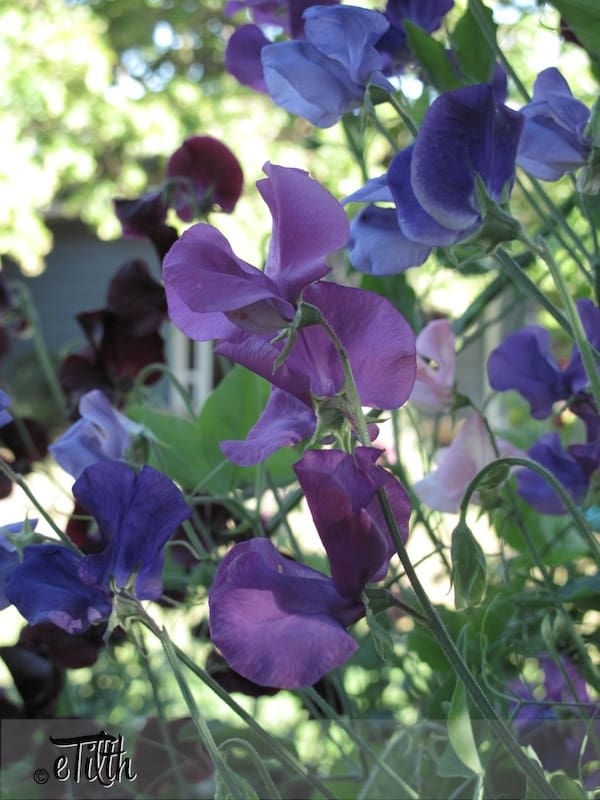 So I’ve discouraged you from planting the big stuff that takes over your yard, the stuff you can get from the store or bulk-buys. I’ve encouraged you to use alternative space like pots and your back hedge. You’re growing up trellises and over pathways. You’ve planned for succession crops and inter-cropping. You’re all set, right?

This year, I’m adding ‘Couve Tronchuda‘, or ‘Tronchuda Beira‘, sometimes known as Portuguese Kale. It’s an heirloom brassica similar to both cabbage and kale, with wide broad leaves I can use to wrap around rice and mushrooms.

Since I now LOVE kale, I’ll grow it next to my favorite ‘Nero di Toscana’ lancinato type. I first heard of this variety from an old BBC episode of The Victorian Kitchen Garden. Because it is a non-heading variety, I should be able to pick leaves as I need them, to add to winter soups. It is also known to grow well in mild winters.

Finally, I’m adding ‘Scorzonera‘. It’s a black carrot-like vegetable with the flavor of oysters or some say like artichokes, and I’ll roast it with parsnips or add it to soups. I’d never heard of it until I started watching historical gardening shows, but once I started looking, I realized Barbara Damrosch has already trialed it. She’s not a fraud. So at least I’ll be in good company.

Let’s stop trying to grow it all and just focus our limited time and space on the highest reward options.

Grace is a former molecular biologist and software tester who loves to geek-out over weird plants and beautifully designed gardens of all sizes. Find Grace at: eTilth, Twitter, and Facebook.

Previous Post: « To Do In The Northwest Edible Garden: March 2014
Next Post: Best Chicken Breeds for Families with Kids »