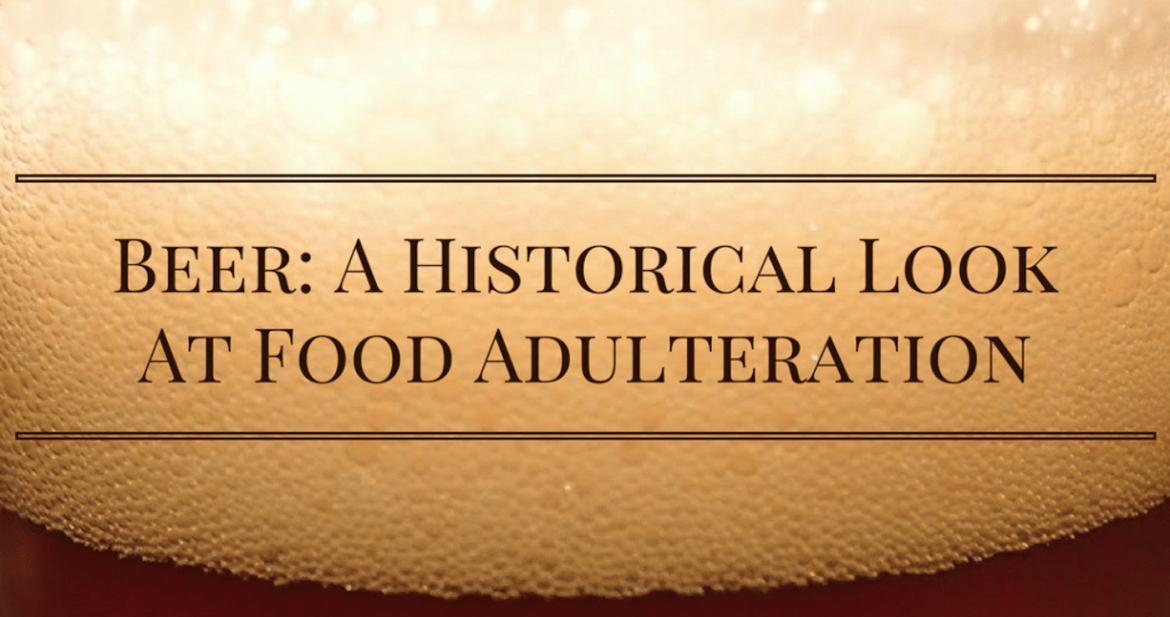 We tend to think of the problems of our age as new problems. Take, for example, food adulteration. When you hear about children dying from melamine-tainted infant formula it’s easy to conclude that the food supply is starting to go to hell in a hand-basket.

Without minimizing the seriousness of modern food supply adulteration, I’d suggest our food supply has been jumping in and out of that particular hand-basket for longer than we commonly think.

Let’s look at one of my passions, beer, as an example. Almost everyone living in the United States has seen an ad for one giant macrobrew or the other that holds up the old Bavarian Reinheitsgebot as some sort of teutonic totem of excellence. This German tongue twister strictly specifies the ingredients allowed in beer and is espoused as the world’s oldest product purity law – dating as it does from 1516. The existence of a law 500 years ago gives us some hint that there were concerns even then about what was ending up in beer – but more on that later.

Going even further back, the Mesopotamians had regulations concerning beer. But it is worth noting that these laws focus more on the social and professional conduct of the tavern keeper. To whit:

Code of Hammurabi, section 108:
If a tavern-keeper (feminine) does not accept corn according to gross weight in payment of drink, but takes money, and the price of the drink is less than that of the corn, she shall be convicted and thrown into the water.

Thrown in the water indeed…hard punishment for pouring a short measure!

For a few thousand years, brewing was a small scale business, primarily the province of the housewife, and apparently in need of little regulation. Leave it to the Bavarians to start laying some precise rules down. Hence the Reinheitsgebot.

Plenty of people have attempted to clarify the details of this 500 year old law so I’ll stick to the essentials. The original text laid down a set of pricing regulations, some limitations on reselling, and of course the well known ingredients limitations.

So this is much more than just a “don’t put formaldehyde in your beer” law (yes, there is such a law, the English needed to pass it). It is a full on regulation of business conduct. Libertarians, be enraged! The Man was specifying the rates tavern keepers could charge, and on a seasonal basis no less! The Man was doing it five centuries ago!

The Man (or “Der Mann” if you prefer) also limited the beer ingredients to barley, water, and hops. Yeast would later get a pass and be allowed in, after that Frenchman, Louis Pasteur, discovered that it existed and had been essential to making beer all along.

Water, I suppose, goes without saying. The mention of barley seems noble, since that grain is the main constituent of most beers. But the final paragraph of the law – which threatens barley rationing in the event of a crisis or price increase – holds the key to understanding the real purpose of the barley restriction.

The exclusion of non-barley grains from beer (in practice, rye and wheat) prevented brewers from competing with bakers – and therefore kept the prices of other grains lower and ensured that affordable bread was available.

While this aspect of the law was just trade meddling (perhaps the bakers‘ lobby was stronger than the brewers’ lobby?), the inclusion of hops on the real-beer-short-list really did have a valid protection role.

In addition to providing bittering and flavoring, hops act as a preservative. They are powerfully antimicrobial (at least by the standards of the 1500’s, I’m not suggesting that you rub an infected cut with hop flowers or anything) and did much to ensure that beer retained its quality over time.

A brewer might opt to shortcut the process and flavor beer with any of several bitter herbs – getting a decent flavor but producing a product that might easily spoil or grow unhealthy microbes over time.

Ironically, the use of hops may have arisen as an alternative to the spice and herb mixture known as gruit. This mixture was heavily taxed and hops were a handy dodge around that regulation…and then someone noticed hopped beers lasted longer!

I’ve tried gruit beers – there is a bit of a revival in brewing them – and personally found them almost unpalatable. But by the time of the Reinheitsgebot, gruit was out and hops were in and their benefits were manifest. The local nobility no longer held a monopoly on gruit and in the ebb and flow of commerce, it was now the cheaper and less desirable flavoring agent.

So the Reinheitsgebot assured the public a safe, moderately flavorful brew and helped keep Bavarian pastries and baked goods affordable. Since then, it has gone on to assume a sort of mystic value when, in reality, it only ever got around to applying to all of Germany around 1900. Since then it has been busy growing ever more full of loopholes, exceptions, revisions and the like.

Now when things really got icky – when the issues started to be about safety and not just protecting the bakers – was in England, right around the industrial revolution.

Starting around the middle of the 18th century when agricultural innovations like automated seed planting and crop rotation suddenly sent farm yields through the roof (and the need for farm laborers into the toilet), people started to flock to the cities. Add in the centralizing influence of industry and there is suddenly a place, for the first time ever, for industrialized beer production.

Many of the most well known English beers date from this period: Bass, Boddingtons, Young’s, Fuller’s. There is ample reason for that. A huge working class had just sprung up in England, working hard hours for little pay in crappy conditions with little to do but drink away their woes at the end of a 12 or 16 hour shift. Yeah, I’d drink my ass off too if I’d just spent 12 hours inhaling coal dust while schlepping pig iron around a 110 degree foundry having my ears shattered by trip hammers.

Anyhow, this era saw the ugliest side of capitalism written at its most epic and unbridled. And just as workers were expected to abide in the most terrible and squalid of conditions, they were expected to subsist on the meanest of intoxicants.

In England at the time, beer was taxed at the production end of the cycle – by taxing the malt – rather than the end product. It made sense, since a massive bulk quantity of grains going into a brewery was easier to keep track of than the thousands of individually poured pints going out of a pub! This had some interesting impacts on the development of roasting technology to make the dark malts that allowed for the modern stouts and porters, and created a strong incentive for brewers to do everything possible to minimize the amount of malt that went into a brew.

As you may have guessed, this is where the formaldehyde comes in.

Since most drinkers weren’t there to savor the nose of a fine pint of ale, but rather to forget the living hell they had come from and steel themselves for the living hell they were going to, there was little incentive to make a really subtle and finely flavored pint. Add in a general lack of showers, shoulder-to-shoulder conditions in the pub, and really – let’s be honest – getting hammered was the main thing.

So brewers found expedient ways to fortify their brews – which meant that less of the highly taxed malt was required to produce a beer of nominal effect. The growing popularity of cheap gin also drove brewers to “raise their game” and produce a more buzz-laden beverage.

They began to add almost anything that would produce intoxication: the aforementioned formaldehyde, various distilled alcohols (which may well have been made from cheaper source starches), opiates, wormwood, chili peppers, and pretty much anything else that would produce a psychological or physiological kick or was suspected of as much.

I’ve read some commentary that the worst of the often-cited stories of Georgian and Victorian food adulteration are exceptional events or out-and-out fabrications from well meaning public health crusaders of the time. But unlike things like “ground-bones-in-bread,” the alleged brewer’s adulterants make complete sense. I’m willing to bet that there was enough of this hooch adulteration going on to make even Bud Light seem like a natural and high-quality product.

If you can’t hold back and want to do some more reading, I recommend Charlie Bamforth’s excellent introductory textbook Beer: Tap into the Art and Science of Brewing. I bet you didn’t know there were textbooks and endowed professorships on brewing, did you? For a more witty and sarcastic overview, I’d recommend the incomparable Randy Mosher’s Radical Brewing or more consumption oriented Tasting Beer.

Where does that leave us today? In the United States, alcoholic beverages are largely unlabeled, though generally not the thing you should most worry about if you are into food purity.

The intentionally added adjuncts and additives in most modern beers are unlikely to affect you as much as they are likely to affect the taste of the product and enrage the sensibilities of homebrewers and craftbrewers. Some additives sound weird but have been around for centuries, like isinglass – a fish product used in many beers as a clarifying agent that upsets some vegans, for example. Others are just plain cheap and expedient (corn, don’t get me started about corn) but have a long history as brewing adjuncts.

I’m aware of no research into just how much crop treatments (fertilizers, pesticides, herbicides) get into the finished brew product, though my intuition tells me that the boiling process intrinsic to brewing does a lot to drive of any volatile nastiness.

The Germans have revised that pesky Reinheitsgebot to the point that it is now an anachronism, a marketing tool as much there as it is here. In practice, EU regulations and preferential taxation statuses dominate.

What goes around comes around, and everything old is new again. What was worried about in the past is worried about now, and will be worried about again in the future. But the great thing about having a beer is that, by the time you’ve consumed two or three of them, the problems all seem so easy to solve…