Overwintering cauliflower is right up there with giant kohlrabi as one of my favorite cool-season crops. I just want to share a quick before and after to show you how my overwintering cauli’s survived the recent Seattle cold snap.

Now, keep in mind I am a Zone 7 gardener – cold is relative. In my area, any temperatures below freezing (32 degrees F) are noteworthy, and temps in the teens for any length of time are unusual. So, I’m not suggesting this will work for gardeners in North Dakota or Saskatchewan.

But for you maritime and coastal gardeners, grow overwintering cauliflower! Seriously, check it out.

Here’s what my cauliflower looked like during the cold snap, when recorded lows were 18 degrees. 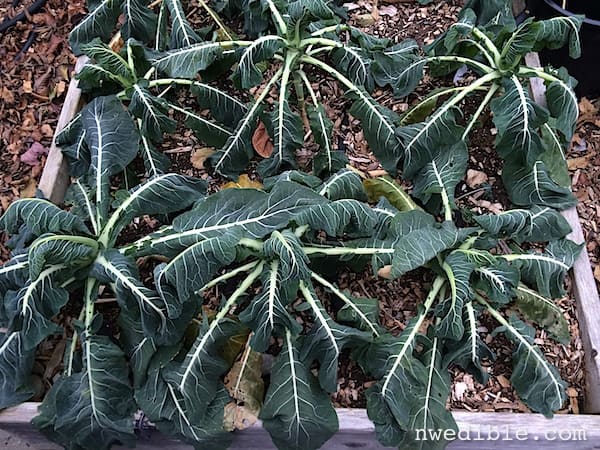 What’s going on with this? you might wonder. I mean, those plants look dead, right?

Well, to be simplistic, the cells of plants are filled with water. The biggest risk to the plant in cold weather is that, when that water freezes inside the cell it will expand. In expanding, ice crystals can rupture the cell’s wall. This is just like if you put a jar of water in the freezer and, as it froze, it expanded enough that it broke the jar. If enough cell walls rupture, the plant dies.

In severe weather, cold-adapted plants do two things to protect themselves from this risk of cell-wall rupture.

First, they throw as much sugar as possible into their cells because sugar acts as a kind of anti-freeze. This is why you will rightly hear that “frost-kissed” plants are sweeter. They really are.

Second, in more severe cold plants release as much moisture as possible from their cells. Temporarily, this is a good thing – less moisture means less threat of ruptured cells. But you also get this strange kinda “frozen wilt” look that you see like on my cauliflowers above.

Here’s my cauliflowers now, about a week after the cold snap. As you can see, they made a full recovery.

I didn’t do anything to help these guys out, either. They got no cloching, no Reemay, no row of Christmas lights under an old sheet. They were on their own and they held their own, just fine.

The Hardiest Vegetables For Winter Gardening

Winter Cauliflower is one of my favorites, but it’s not the only hardy vegetable for cold weather gardening. As you think ahead to what you might want to be harvesting next year at this time, keep in mind some cold weather stalwarts.

I debated where to bin Swiss Chard – somewhere between 20 and 25 degrees  mine looks dead, but it consistently regrows from the root for early spring greens unless the root itself freezes solid, and that takes temps down into the teens. Also, these estimates are for winter adapted varieties – Deadon or January King cabbage, for example, as opposed to quick and tender summer coleslaw varieties.

Never pick veggies while frozen. Wait until the cold snap passes and they can thaw out naturally and on their own. Exception: if you have heading (not sprouting) broccoli or cauliflower in floret, you might as well pick the florets even if they are small- when the florets freeze they tip-brown and often start to rot after they thaw.

Don’t yank roots on greens like chard and frisee just because leaves die back – the plant will often resprout and provide you with the earliest spring greens in the neighborhood.

Some winter veg will look ugly at temperatures that will not kill them. Don’t be discouraged. Many root crops will lose their leaves when it gets much below 28, but the roots themselves are still fine and harvestable. Stuff like cabbage and Brussels Sprouts may need to have a layer or two of wrapper leaves removed but should be tasty underneath.

It might seem counter intuitive but snow in the Pac NW is an insulator – it actually keeps the ground warmer than it would otherwise be. Heavy cloud cover also helps trap whatever heat can build up in winter – I call it the sky cloche.

How did your garden come through this recent cold snap? Did you lose any crops?

Previous Post: « How To Trim A Whole Beef Tenderloin For The Holidays
Next Post: The Introvert's Christmas »