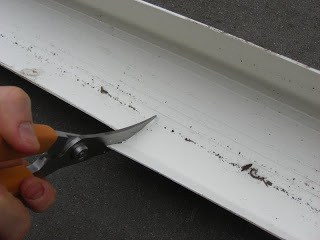 So this year I got in touch with my Limey heritage (Hi Grandma!) and decided to try sowing my peas indoors, under light, in an, ahem, long section of Yankee gutter. Today it is almost exactly three months after my initial pea sowing, and I thought I’d let you know how the grand experiment worked.

First things first, I bought a section of gutter. It came in 10′ lengths and was cheap – like $7 or so – at my local hardware store. My seed-starting set-up is 4 feet wide, so the first thing I did was cut the guttering into 4′ lengths. I used poultry shears to cut through the gutter plastic, but that’s just because I have a nasty habit of grabbing whatever is at hand that might reasonably have a chance of getting the job done. I’d recommend a hack-saw to do the job right. 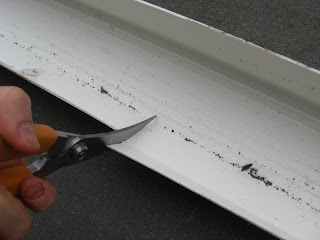 I used blue painters tape to seal up the ends of each section of gutter. I did not drill any drainage holes because I didn’t want any roots climbing out and making it difficult to slide the seedlings, soil and all, into their eventual, permanent home. 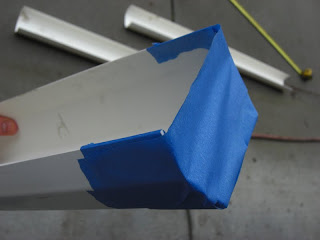 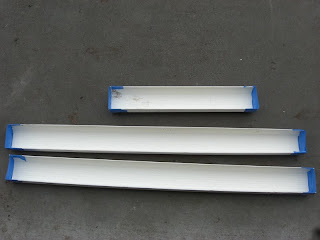 In mid-February (Feb 10th, to be precise) I filled the gutter lengths with potting mix. I mostly use good ol’ Miracle Gro. It is what it is. It’s inexpensive for the volume I use and I get good consistent results. Buy what your budget and conscience will allow. I planted my peas – Sugar Snap Pole – two inches apart in a double row down the length of the gutters. I plant my peas and beans on tight spacing. It seems to work out. 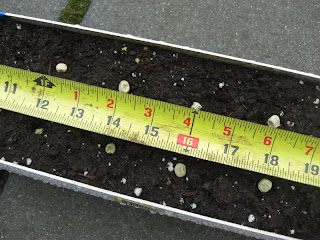 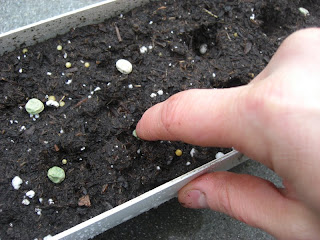 I popped the peas under lights and waited. I kept a close eye on soil moisture, being careful not to overwater due to the dearth of drainage holes. About a week after sowing, they were up and going:

Two weeks after sowing, I was confronting the reality of needing to transplant them: 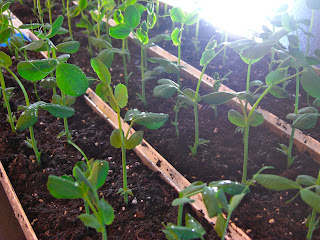 Three weeks after sowing (March 3rd), I had no choice but to get these babies outside. 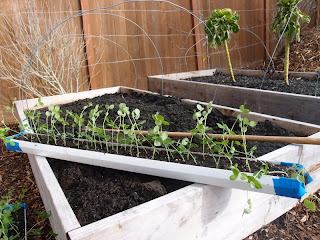 I used my hoe to create a trench about the size and shape of the gutter along one edge of an empty bed. 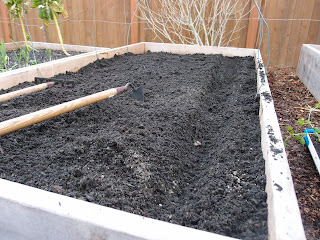 Here’s the tricky part. All the British gardening books imply that you can simply slide the pea starts and soil from the gutter in one smooth motion into the earth for transplanting. In theory doing this minimizes root disturbance, because the pea’s roots stay surrounded by the same soil the whole time.

I am here to say that it does not work like that. That 4′ length that’s already in the ground in this picture? That took 10 minutes (and a lot of nervous sweat) to get in the ground. I may have waited a bit too long to transplant, but the peas did not want to just ease out. They were recalcitrant. You know that move that magicians do, where they pull a tablecloth out from under a fully-set table, brimming with full wine glasses and fully set plates, and nothing falls over? Basically that’s the move I had to do to “slide” the peas into the ground.

The angle of the gutter here plus a series of jerking motions is what it took to get those peas into the ground. 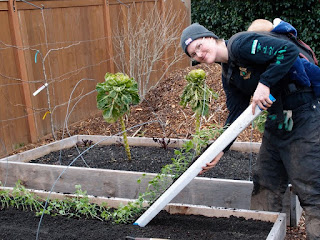 The end result was peas that looked a little beat-up, but, hey! they were in the ground. At this point I was swearing up and down I’d never try this crazy stunt again because it just wasn’t worth it to pea-wrangle in the freezing cold of early March. 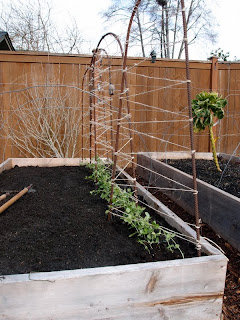 In case you were wondering, this year’s pea trellis was made from jute twine and a series of hoops I bent from 8′ or 10′ long sections of rebar. These are the front beds, so I try to be somewhat pretty for the sake of the neighbors. To me this is pretty, don’t know if the neighborhood agrees, but they seem relatively supportive. 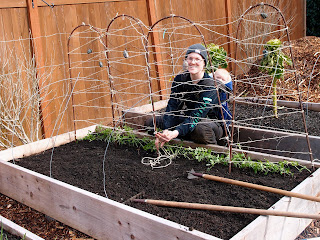 With cold weather still very likely I cloched the whole mess with a few pieces of 6 mil poly I had lying around. Definitely didn’t want all that pea-transplanting work to go to waste. 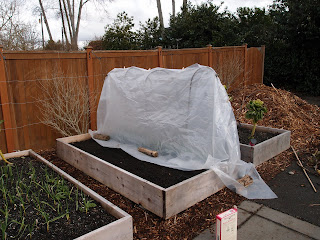 Well, what a difference 3 months makes. The peas have been in the ground for a bit over 2 months. They really took off in April and have been growing like crazy. This picture was taken May 11th, and the peas are almost to the top of the support hoops, which means it’s time for me to improvise some sort of support for their continued growth. These aren’t bush peas, they are the far-superior (to me) pole variety, and they’ve got 4 feet more of growth in them before they’re done. 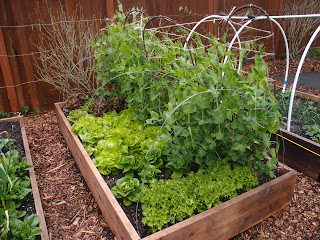 I’m also rather proud of the stand of lettuces in this bed. This bed is so pretty right now to my eye that I have to force myself to harvest the lettuce. Food production is the whole point of this endeavor, but I find it a bit hard to ruin the pretty living quilt of Butterhead and Frisee and Romaine and Red Looseleaf that has knitted together so effectively. 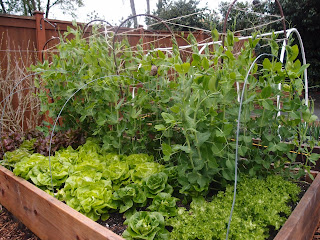 So there you have it: the peas are thriving. They are well, well ahead of where they would have been had I waited to direct seed. This has been a long, slow, cold spring (quantifiable, record-breaking crappiness), and I have heard many tales of rotted peas and failed germination. In light of how much trouble my fellow gardeners have had getting their spring peas up and going with the direct seed method, I have to say this length of guttering technique has some serious benefits.

Despite the frustration of transplanting, I have to call this technique a success. I’ll be eating peas probably 4 weeks earlier than I could have done if I had waited to direct seed. With enation (a warm weather pea virus) effectively defining the end of pea season in these parts, this early start may prove the difference between a worthwhile harvest and not many peas to speak of. This is a great way to start peas indoors and an excellent technique for the gardener’s arsenal.
How are your peas growing?
27