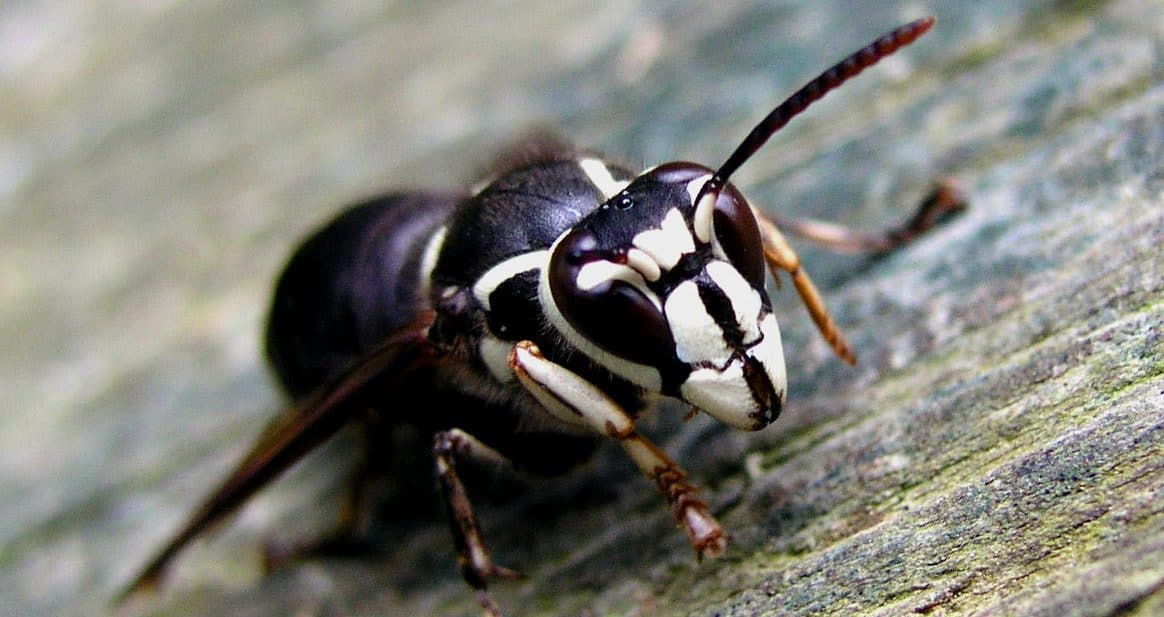 I’ve been keeping my eye on this nest for several weeks. It’s the aerial home of a colony of bald-faced hornets (despite the name, a type of wasp). When I first noticed the nest, I’ll admit I was concerned. It hangs about 10 or 12 feet off the ground, adjacent to the grassy (non-vegetable) portion of our yard. It looks a little like modern art and a little like someone stuck a grey ball of twisted cotton candy up on a branch of one of our katsura trees. If you can get past the whole “wasp nest” thing, it’s actually quite beautiful. 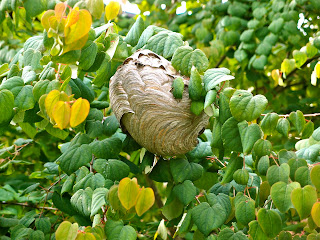 A little research on Wikipedia didn’t help my concerns:

[Bald-faced hornets] are more aggressive than both the wasps normally called yellowjackets and members of the Vespa genus, and it is not considered safe to approach the nest for observation purposes. The bald-faced hornet will aggressively attack with little provocation.

When you have two small children and you see a wasp nest, here’s a totally reasonable reaction: “Get that thing the hell out’my yard before one of those bastards stings my kids.”

When you are a fairly dedicated gardener and you see a wasp nest, here’s another totally reasonable reaction: “Ah, so that’s why I’ve had almost no pest problems in the garden this year. That’s why I haven’t had to spray Bt against cabbage worm. The wasps are eating my bad bugs.”

I watched the bald-faced hornets flying in and out of their nest. They were huge. They looked twice the size of a yellow-jacket. But I sure wasn’t getting “aggressively attacked with little provocation.” I kept a respectful distance and was able to observe them without problem.

I was torn about whether to remove the nest or leave it be, so two days ago I called my exterminator for an opinion. Now let me take a moment and clarify something: I am not some All Creatures Great And Small insect pacifist.

I have squished slugs without remorse, knowingly smothered aphids in soaps, dumped boiling water into ant colonies and called my exterminator on several occasions to deal with yellow-jacket and paper wasp nests built on my home. We’ve had to remove several nests started up under our eaves, and in one notable instance, a colony of yellow-jackets set up a sizable nest in one of the hollow wooden columns that flank the entrance to our front door. They violated the cardinal rule of real estate: location, location, location. I didn’t lose any sleep over paying a pro to kill every single one of those bastards.

But this nest was different. It was higher, not on the house but up in a tree across from our main garden area. And I was pretty sure these bald-faced hornets were performing some serious garden helper work.

On Monday my exterminator (about whom, really, I can’t say enough good things – is that weird?) talked through the pros and cons of nest removal with me. He suggested I go out, really watch where the wasps were flying and evaluate their flight pattern and the risk from the wasps defending their territory. He told me that the nest might be fine now, but as it got bigger, the territory the wasps would defend would get bigger too, and I should be very careful about that. He told me bald-faced hornets are agressive but he didn’t push me to kill the nest. He advised me to put “wasp nest observation” on my calendar as a repeating weekly event. He said that when they started threatening my nest, I needed to take action and I should call him.

And that’s where we left it. I was on nest observation duty. It was all very thoughtful and worked to balance the risk of animals who will sting – and hard – to defend their home with the benefit of garden pest reduction and a minimal-interference philosophy.

Yesterday, the guys who mow my lawn showed up at my front door carrying a can of Wasp and Bee Spray. Not for the first time, I cursed myself for not knowing Spanish as they said, extremely helpfully, “watch out for stings!” in broken English.

They had sprayed the nest. They had assumed, as most people would, that I wouldn’t want a wasp nest a dozen feet in the air above where my kids might play. They hadn’t thought about evening spraying to avoid beneficial pollinators, or less toxic methods of removal. Nope, they had helpfully dispatched the nest for me with some hardware-store brand of poison designed to spray 15 feet in the air.

I’m sure my face fell. “Okay,” I acknowledged, as they pointed to the nest,”okay.” And then I confirmed: “You sprayed?”

These guys – hard working, diligent, giving me that value added service my yard care company is known for – nodded and smiled.

I think I was confused. I wasn’t angry yet, just sad. I was sure the nest was done – what was I going to do, yell at a couple of guys who were trying to help me out and were probably worried my kid was going to get stung while playing outside?

I closed the door. A few moments later, through the side windows, I saw them walk up to the nest and spray it. Foamy stuff coated the front of the nest and the surrounding leaves of the katsura. I thought they were spraying it again, to be sure, and my stomach clenched as I thought about all the honeybees and bumblebees that were out on that sunny, warm afternoon, getting exposed to some toxin carefully engineered to kill them and their kin quickly and on contact.

It only occurred to me several hours later that my yard guys had probably been asking for permission to spray the nest at the door and I had probably, inadvertently, given it.

Naturally, I had already freaked out on Facebook about this, and called up my yard service company and, rambling and sort of emotional, “clarified” my postion on pesticides, which is: please don’t.

I don’t know if the nest will survive the spray. I have seen some wasps moving around it since it was hit, and based on the time of day – afternoon – probably few were in the nest anyway when it was sprayed. And who knows – I may yet pay my exterminator to come and kill all the bald-faced hornets. But if I remove it, I want it removed carefully and in a way that will minimally impact the other insect life in and around my yard.

I feel like such an ass. I’m really upset over the spraying of a wasp nest I don’t even know if I want in my yard. I’ve become a weirdo wasp lady.