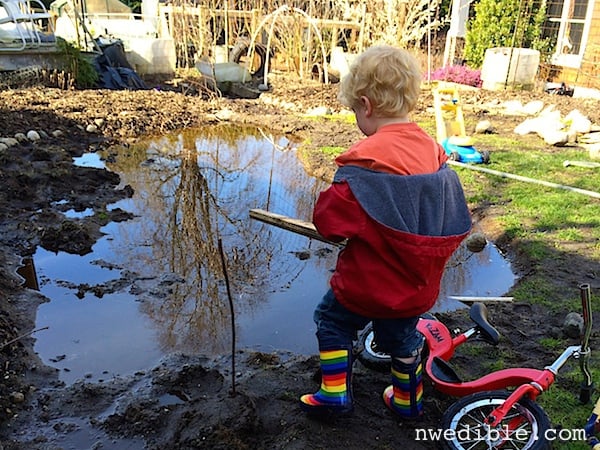 It’s really amazing how quickly a week can slip by with barely a post written. It’s not that there isn’t anything to write about. Au contraire. There is so much to write about, I don’t even know where to start.

Let’s start with my shoulders. Cause, damn, they are sore. I’m no stranger to a good stretch of garden work but the digging, shoveling, raking, hauling, moving, schlepping and scraping I’ve been doing this past week or so has left the area right between my shoulder blades and my neck weary.

It must be spring, season of overly ambitious projects!

It started out innocently enough. I never actually intended to overhaul half my yard by the sweat of my brow and, uh, other parts.

But you see, I was given this basic permaculture how-to book.

And if you give a gardener an easy to understand permaculture book, she’ll probably wonder about a swale.

And if she wonders about a swale, she might decide to dig a pond.

And if she decides to dig a pond, she’s going to want to get some ducks.

And if she gets some ducks, she’d better plan to recapture their manure and pond water as a high-nutrient fertilizer.

And if she plans to recapture their manure and pond water as a high-nutrient fertilizer, she’s going to need a suburban food forest.

And if she needs a suburban food forest, she’s got to expand the edge of the south-facing garden.

Of course, to expand the edge of the south-facing garden, she’ll dig up and move a bunch of sod from one side of the garden to the other.

And after she digs up and moves a bunch of sod from one side of the garden to the other, she will want to sheet mulch the new planting area.

And if she wants to sheet mulch, she’s going to need a lot of cardboard.

And if she needs a lot of cardboard, she might ask if she can have some from the nice man at the cafe that makes very good chocolate chip cookies.

And if she gets a bunch of cardboard (and a cookie) from the nice man at the cafe, she’s going to have to lay it out.

And when she lays out the cardboard, she will realize she needs something to cover it with.

And when she realizes she needs something to cover the cardboard, she will have to clean out the chicken coop to get at the composted litter.

And as long as she’s cleaning out the chicken coop of deep litter, she might as well freshen the sand-bed under the roosting poles, too.

Which means she needs to drive to the store to get some sand.

And when she has the sand, she can haul all the deep-litter to the food forest area.

But before she moves the coop litter to the food forest area, she’s going to need to transplant three full grown spireas and a mass of winter-blooming heathers.

And if she transplants three full-grown spireas and a mass of winter-blooming heathers, she might as well re-landscape the front entrance to the house.

And if she re-landscapes the front entrance to the house, she’s going to have to tidy up the side path as well.

And while she’s tidying up the side path, she may notice the bucket full of water that’s been left outside all winter. And that will remind her…

And if you give a gardener a pond, she’s going to want some ducks.