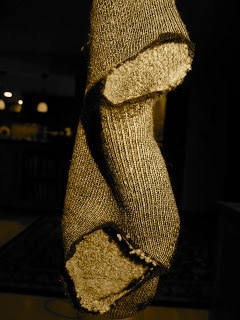 Now that you are an urban homesteader, let’s talk about some of the surprises.

Yes, I’m sure you knew how rewarding it would be, you expected that sense of satisfaction that only shoveling a quarter ton of fresh compost can generate, that pride that that comes with lacerating your entire torso in pursuit of just one more blackberry, the esprit de corps generated when you and your wife work together to push a chicken’s prolapsed…uh…innards…back into place.

But I’m sure some things caught you by surprise.  While I went in eyes open, aware that I’d walk in to the office with hands stained purple from PVC cement, I didn’t expect some of the other benefits of this new lifestyle.  And so in true David Letterman style, here are:

Often, on the way to the train, I do a quick chicken check or move some water or kill a slug or two, just to get my day started right.  When I get to the office, I look down at my pants and notice a new, still damp, discoloration of some sort.  What is it?  Coffee?  Something from the chicken coop?  Should I sniff it to find out?  I’ve learned it is best not to delve too deeply, but if in doubt, to sit at the far end of the table during meetings.

I’m 40 years old, not quite in the full vigor of my youth but at an age where I should be far from infirm.  Yet often I find my shoulders or elbows or knees plagued by sudden stabbing pains.  Yes, this seven pound laptop is too much for me to carry after a weekend of shoveling bark, I’ve picked up a case of lateral epicondylitis and have severely restricted motion in my elbow, do you mind carrying it for me? 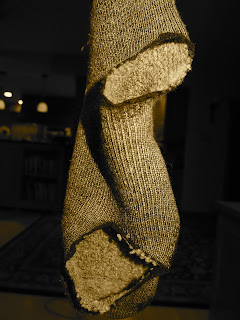 Gardening is hell on your socks.  Late at night, stumbling around in stocking feet, about to head for bed, and you realize the coop isn’t locked up or the water is still running. Where are those muck boots?  Crap, I left them in the garage…let me just run out like this. The results speak for themselves. At one point, the terrifying ghost tube pictured above was a rather nice wool sock. 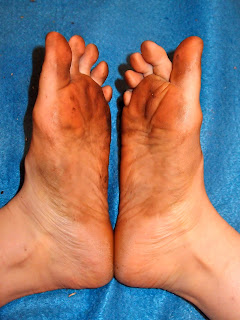 In the warmer months, why bother wearing socks when you can run around in sandals or barefoot?  Few things beat the squelching feeling of stepping on a slug during an early morning egg harvest!  And given time, you’ll track enough dirt into your house that you can start planting alliums in the living room.   The only drawback?  Feet that are as dirty and worn as Frodo and Samwise, except without the furry toes. 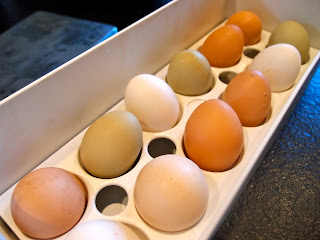 Yes, it’s true. A hen doesn’t need a rooster to make an egg any more than a woman needs a man to have a menstrual cycle. I may have invoked the term “chicken period” once or twice to get this concept through to some of my less agriculturally-sophisticated coworkers. Many of those exposed to this terminology now forgo omelets in favor of oatmeal.

There is a grange close to my office, so often I pull urban homestead supply duty: one bale of straw (the maximum a Honda Accord can hold), a couple bags of seed meal, some layer pellets.  As I stand there in my tie and my nice office shoes, holding a printed list of ingredients to Steve  Solomon’s complete organic fertilizer mix and asking questions about the difference between rapeseed meal and cottonseed meal, the staff at the grange are kind, but speak to me in the deliberate and enthusiastic tones used by primary school teachers to first graders: “Ooh, chicken feed is right over HERE! Are your hens LAYING or NOT LAYING? Do they like yummy CRUMBLES or tasty PELLETS?”

Ours isn’t the “cool” house in the neighborhood. We have no Wii, PS-3, X-Box, or downstairs playroom. We have no go-gurts, goldfish crackers or fruit snacks. Erica’s insistance on being kids using their polite words in our home and my fussy refusal to allow pillow forts to occupy the living room overnight pretty much killed our shot at “coolest kid house.” Until we got chickens, that is. Now we can’t keep ‘em away, those neighborhood kids. They pack the place until they outnumber the chickens.  The three year old from across the street crawls underneath the hen house and the 5th grader vet-to-be from up the hill come up with names (“this one is Salt, this one is Pepper, and this one is Matisse!”).

3) Where is that funny smell coming from?

Two days of spreading fresh manure and kitchen waste into new raised beds leaves its mark, on the physique and the psyche and even the senses.  The perception of smell follows you, as does a certain sort of paranoia.  Is that me?  Are my shoes clean? I did shower, didn’t I?  Twice?  Are people edging away from me? Should I go into this empty office and try to discretely smell myself?

2) The surprising beauty if it all 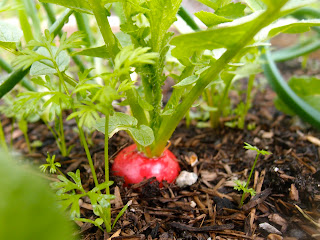 I grew up on the edges of a lot of farmland – and unless you are really into that wide-open-rolling-spaces scene, farmland isn’t really that beautiful (and this farmland was neither wide open nor rolling).  It was dully green, then dully brown, alternating on a roughly annual or biannual cycle.  But viewing vegetables up close, sending up their blossoms and scapes and seed heads and giant thistles, is an entirely different matter: the stentorian magnificence of chard, the anfractuous lace of asparagus, the panache of fennel, the otherworldliness of kohlrabi, the bracing regularity of alliums. 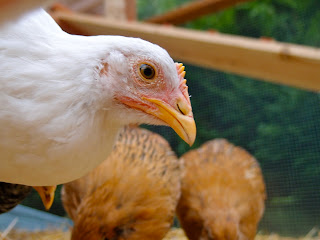 Around the office, my chickens now have fans.  I begin presentations with updates on the latest photos, updates on egg production, and (if anyone new is in the room) another chance to explain why we don’t need a rooster.  Sure, some people think I’m a little mad, but most seem to regard it with a deep curiosity.  I never realized that seven hens in a eight by twelve coop would capture the imagination of a group of data architects and developers, but then again, I didn’t realize a lot of what I’d be getting into!

What are some of your urban homesteading surprises?