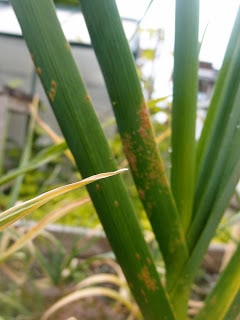 Last year, Nick really got on board with the gardening thing. His support and assistance and enthusiasm is what has allowed my backyard garden to become our urban homestead. The gateway plant, the crop that drew him into the entire gardening ethos, was garlic.

Nick was so enamored of the way hardneck garlic scapes curl and twist, like the neck of some anorexic swan. He loved the alien puffball flower they’d make if you let them. He read up on the history of garlic, and it’s a long one, and learned all about the origins of Spanish Roja and Chesnok Red and Bavarian Purple. Most of all, he loved how wonderful fresh garlic tastes, how it stores for months and months, how one little clove becomes a big hearty bulb almost magically.

We had run into a few minor problems with the 2010 summer harvest – our neighbor had shared some volunteer garlic plants with us to fill an empty spot in the garlic patch where we had run low of seed stock, and we noticed some strange curling and distortion of the leaves from the starts she gave us. The scape would get trapped and form a tight little ball within the leaves, unable to clear the top of the leaf sheath. I would perform a strange kind of leaf surgery, freeing the scape and allowing it to unfurl. The plants were small, smaller than anything I’d ever grown, but I chalked both these things up to transplant shock, since the starts went in in early spring.

Still, in all the years we had grown garlic, we had always had a bountiful harvest (we grew a hardneck variety called Music, and on a good day it can sport cloves you might mistake for elephant garlic). We’d never run into any pest or disease problems, and considered garlic right up there with kale for ease of growing. And so last year, in the final days of my pregnancy and the first tired days of new parenthood, Nick eagerly planned our garlic selection.

Because of the strange curling of our 2010 garlic and a depressed harvest, we opted to start with all new seed stock. You know, just in case. Nick made the garlic selection based on what would be diverse, beautiful, and long lasting. I insisted we plant Music again, my old favorite, but other than that, Nick took charge. It was wonderful to see him so eager to participate in the garden planning.

At a not-insubstantial cost, we bought four pounds of seed garlic, all high-quality mailorder stuff. We planted it sometime in October or early November (those days are fuzzy to me), taking over 2 full beds with it and sticking extra cloves here and there.

All seemed well. I had noticed some tip browning on the garlic, but that’s hardly unusual, and honestly I didn’t give it much attention. And then last night I saw this: Garlic Rust. 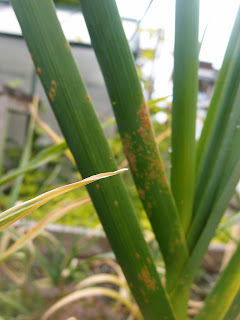 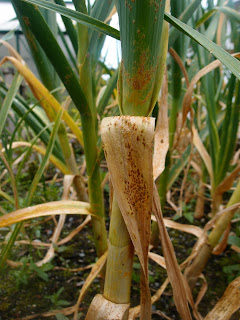 I’d never seen it before, but somehow I just knew that I was looking at garlic rust. A quick Google image search confirmed my suspicion. I’m out in the garden almost every day, so I tend to catch these things early, and I swear this must have popped up practically overnight. Many of the plants had dropped multiple outside leaves and the junction between stem and leaf on most of the plants was just thick with orange rust.

Some internet sources said garlic rust was the garden equivalent of Typhoid Mary, others seemed to say it didn’t necessarily destroy the crop. All agreed that late, consistent rain makes for a bad rust year. This has been a bad, bad year.

In my garage I have the garden doctor’s kit. It’s not my first line of defense, but it’s the organic stuff I’m willing to pull it out if I need to: neem, BT, etc. I had a container of copper fungicide that claimed it controlled rust and I figured it was worth a shot to try to save the garlic crop. 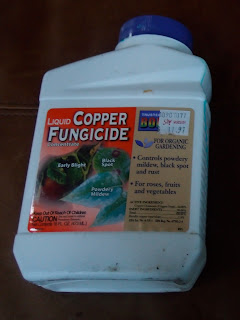 The directions said to spray when 12 hours of clear, dry weather could be expected. Feeling time was of the essence in controlling the rust, and further figuring that it might be mid-August before I could reliably expect 12 hours of dry weather, I opted to just go forward with the spraying asap. I started my triage by pulling the most infected, outer leaves off the garlic. This is when I began to realize my rust problem was a problem.

The rust was deep into the stem-leaf junctions of the plant, and even a gentle tug of the garlic brought the plant up out of the ground. Although many of the inner leaves of the garlic looked okay at first glance, the vast majority of the plants had no root anchorage at all. They looked decayed and molded. The roots in many cases had completely withered. 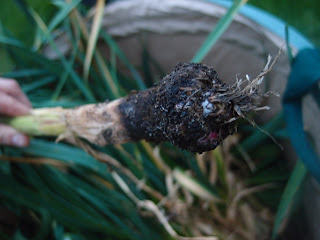 I started yanking plants, one by one. As I did so, the bed so recently filled with proud, strappy green leaves emptied into a shell of soil pockmarks and weeds. 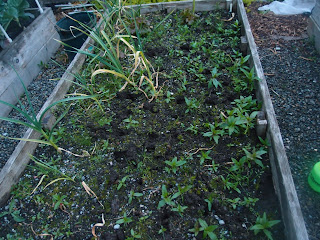 I pulled plant after plant and transfered them into our yard-waste container (I wasn’t composting the Typhoid Mary plants). I wanted to huck them into the municipal green plastic yard waste container angrily, to hurl them and throw them and stomp out my anger and frustration that the garlic had failed me, and had failed Nick.

I couldn’t. Rust spores are light and easy to disturb and my juvenile rage would only have shaken them to the breeze and furthered their destruction. And so, tenderly and deliberately and carefully, like I was handling pie dough, I moved the doomed garlic plants to the can. 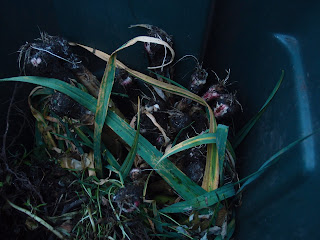 When I was done, I sank down between beds, sat back on my heels and cried. I cried to think of so much money, garden time and bed space lost, and I cried for the enthusiasm my husband had for this garlic. Nick was working late, pulling another double shift, and so the duty of the destruction fell to me alone. I cried to imagine his disappointment when I told him at 11 at night that I had tossed an entire bed of his garlic.

Some things are worth struggling for. Some tender things you nurture because the reward is so worth it: children, melons, the good fight. Some things you have to give up on, have to tear out and knock down and pull up: prejudice, inequitable relationships, disease encrusted garlic. The garden doesn’t need any more water, not even from my tears. I know pulling up Nick’s garlic was the only thing to do. But that doesn’t make it easy.

Previous Post: « Back To The Roots Oyster Mushroom Kit Giveaway!
Next Post: The Chicken Coop Is Done…Enough. »