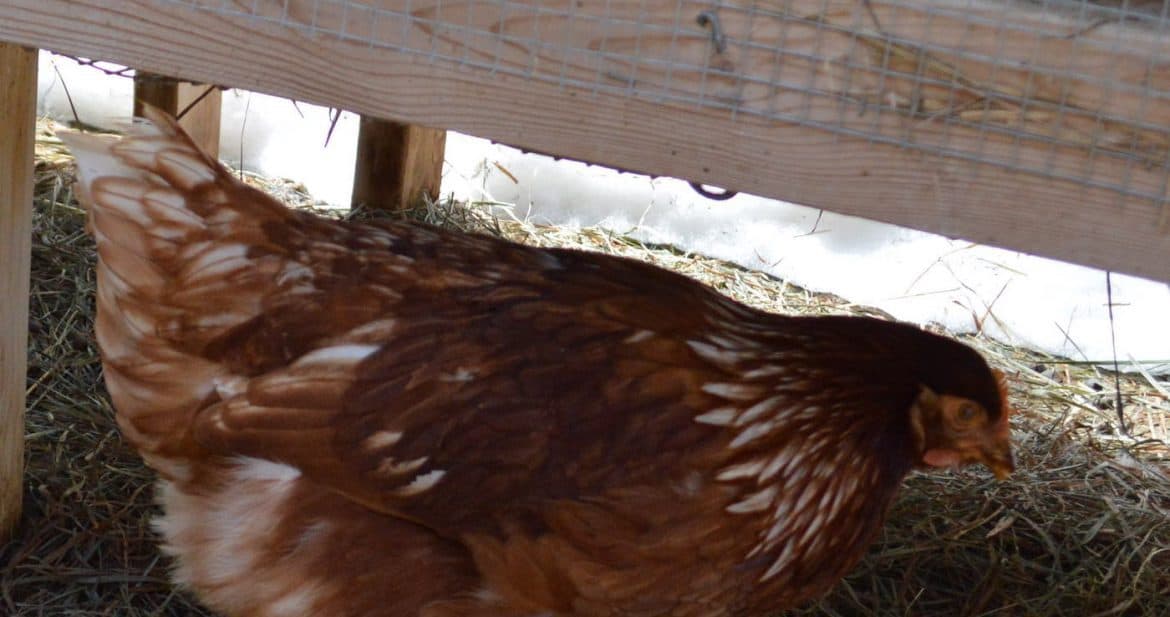 Regular guest poster David walks us through the magic that happens when you combine rabbits and chickens, and how he implemented this synergistic pairing on his own urban homestead.

One of the easiest to understand tenets of permaculture is the goal to use “stacking functions” wherever possible. Simply put, functions are “stacked” when you can use the same piece of ground to produce multiple yields or achieve multiple needs. Stacked functions can often be so synergistic that you could say 1+1=3.

Increase Your Yield from the Same Square Footage

A famous example of stacking functions is the way Joel Salatin at Polyface Farm has mobile chicken coops for his laying chicken flock that follows several days behind his pastured beef. The chickens enjoy picking through the cow patties for larva that could cause a parasite issue when the cattle next touch that paddock, and also spread the manure more evenly around, avoiding stands of bitter grass from a too-high concentration of nitrogen in one clump. The chickens sanitize the pasture, increase the financial return on eggs because of the amount of forage they consume, and ensure more even grazing.

A different Polyface stacked function has always intrigued me. Daniel Salatin, Joel’s son, has bred meat rabbits since he was very young. With the exception of growouts that are tractored on pasture during the growing season, all of his rabbits are kept in hanging cages above an area hens have access to. He calls this his “Raken” (a combination of rabbit and chicken) House.

In reading Joel’s books and watching YouTube videos like the one below, the Raken House concept captivated me. And unlike pastured beef and large mobile poultry houses, function stacking my rabbits and chickens is something I can actually experiment with on my small urban homestead!

Designing Your Own Raken House

All you need for a Raken House are rabbits in cages suspended several feet in the air, with chickens allowed to access the bedding on the floor below the cages. The basic concept is that simple. Carbonaceous bedding like straw or wood shavings is a must, both for absorbing the rabbit urine that falls from the cages, and to catch rabbit and chicken manure. A roof of some sort protects the area from excess rain.

Hanging the cages with the top of the cage at eye level makes for easy daily maintenance of the rabbits, and gives plenty of room below to shovel out soiled bedding as needed.

An earthen floor works much better than a wood or concrete floor in a Raken House because the rabbit’s urine, dumped water, leaks from the roof and any other liquids that the bedding can’t absorb will drain off. Plus, an earthen floor allows worms and other decomposers free reign to move in and help with the composting process – while providing additional free protein for the chickens!

You might opt for shallower bedding that’s mucked out frequently, or deep bedding that is cleared out just once or twice a year. This is partially personal preference and partially site-specific, so choosing the right style of bedding for your Raken House may require some experimentation.

Shallow or deep, the chickens naturally stir and fluff the bedding as they scratch which helps keep the bedding from going anaerobic (read: stinky!). Periodic scratch grains will incentivize your hens to work extra hard to fluff a certain area. 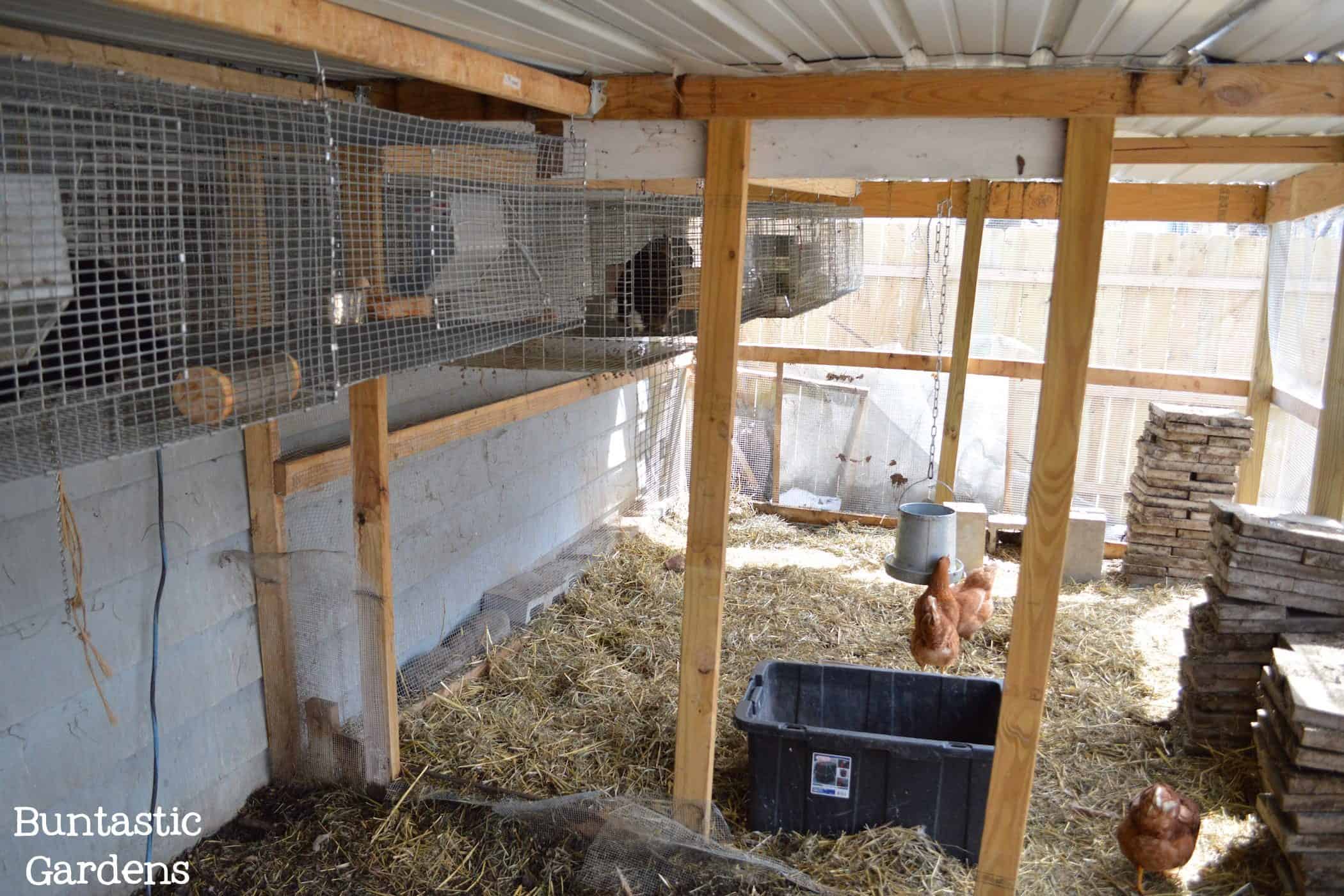 Advantages to Combining Rabbits and Chickens

I combined rabbits and chickens in two ways on my small urban lot. First, I hung rabbit cages inside my chickens’ secure run (photo above) to create a traditional Raken style setup. However, because I don’t have room for all my rabbit cages inside the existing chicken run, I also built fencing that allows me to range the hens during the day under the rabbit hutches that don’t fit inside the run (photo below).

The latter isn’t a traditional Raken House – there’s no roof – but the chickens eagerly head out every morning to begin scratching underneath the hutches. One hutch in particular has a doe who likes to waste food – several of the hens make a beeline for that hutch every morning to gobble up the wasted rabbit pellets on the ground. Allowing the chickens to range under low hutches.

These two experiments in combining my rabbits and chickens have given me a good sense of the substantial advantages of this set up:

Ammonia buildup from urine is a particularly common issue in rabbitries. It doesn’t smell pleasant, which is a good reason to avoid it on its own, but too much ammonia can also abrade respiratory tissue and lead to upper respiratory infections, which are one of the biggest potential health problems with rabbits.

The smell from the rabbit urine is considerably less than before we let the chickens out into the rabbitry. Except in weeks when there’s been a lot of precipitation, the smell is barely noticeable now. The natural scratching action of the chickens has been even more effective at reducing odors than common urine neutralizers like barn lime or PDZ.

Dry bedding is key to successful odor reduction. As I get more experience with the Raken House concept in my specific context, I’m increasingly liking the use of deep litter inside of the secure, covered chicken run. My primary difficulty is that my self-built roof leaks! I’m in the process of redesigning it and will begin replacing it with a better design shortly.

If you have lots of leaks in your Raken House, either through the roof or because of insufficient roof overhangs that let rain and/or snow blow in, shallower bedding refreshed more frequently works better, because wet deep bedding compacts quite easily and turns anaerobic.

In the roof-free day yard, I use a much thinner carbon layer because it will inevitably get wet. A shallow layer is easier to clean down to bare earth than a heavily compacted deep layer, and the shorter hutches are much harder to clean under than the higher hanging cages. Shallower bedding dries out much faster after rain events.

Reducing the smell is the primary benefit but an important secondary benefit to combining rabbits and chickens is keeping the fly population in check. You will still have flies, especially on warm days, but without chickens they can be awful.

I estimate our fly population during the summer and fall of last year was about one-third what it was in 2016 despite having ten times the number of rabbits and not using any other methods of fly control (e.g. fly bait traps, glue traps, fly predators, etc). At this point, I’d have the chickens in the rabbitry even if they didn’t lay a single egg. They’re just that helpful.

An unforeseen benefit of the Raken concept has been reducing the rodent pressure. Wasted food is inevitable with rabbits no matter how you set up your feeders, and wasted pellets on the ground will inevitably attract rodents. My chickens relish rabbit pellets and eagerly clean up every speck of wasted food they can find.

I feed the rabbits first thing in the morning. With the exception of pregnant and nursing does that get fed enough that they’re still eating overnight, most of the cages finish their ration well before sundown – even on short winter days – so the chickens have plenty of opportunity to clean up as much of the potential rodent bait as possible.

There is no such thing as waste in nature. Everything is food for something else. A healthy agricultural system emulates this as much as possible. Chickens cleaning up the wasted rabbit food reduces rodent attraction, but it also makes the chickens cheaper to feed. And wasted rabbit pellets are hardly the only thing the hens scavenge in a Raken House.

Their role in reducing smell, flies, and rodents is worth it even if they didn’t lay a single egg, but all of the foraging they do makes their (delicious!) eggs cheaper in the bargain.

My hens scavenge all sorts of invertebrates – particularly worms and larvae – attracted to the rabbit manure. They eat a lot of the wasted hay. Their scratching behavior “pre-composts” all of the rabbit bedding, which in turn becomes food for my garden. While our urban homestead is far too small a land base to grow all of our own rabbit food, we do use compost-based fertility to grow some important medicinal herbs and forages for the rabbits.

5. Compost for the Garden

Rabbit manure is prized by many gardeners because it is a “cold” manure that can be applied straight to the garden without composting. Moreover, it is one of the most balanced manures, and particularly loved by earthworms and other beneficial soil life.

Chicken manure, on the other hand, is a very “hot” manure. It’s so high in nitrogen that farmers who raise pastured broiler chickens limit their passes to once a year even with lots of nitrogen-loving grass in their pastures. The pathogen profile of chicken manure is also more dangerous than rabbit manure.

I like to apply bedding mixed with raw rabbit manure as needed to maintain a mulch cover on garden beds unless applying it would result in a potential food safety issue (e.g. anything consumed raw, like salad greens).

At first I was concerned that running chickens under my rabbits would create a manure challenge, since the hot chicken manure would get mixed into my carbon layer. This has been less of a problem in practice than I feared it would be.

In areas with a thin carbon layer, I can easily scoop up chicken poop with a rake-style dog pooper scooper in just a minute or two a day and put that into my compost bin, instead of directly to the garden. The deep litter in the coop is simply aged to make wonderful compost.

A “Raken” House for Every Homesteader?

The Raken House concept turns the chore of rabbit waste management into a mini-ecology of its own. Chickens working under the rabbit cages help the rabbits stay healthier by reducing ammonia, flies, and rodents. The chicken’s foraging for otherwise wasted food makes eggs cheaper. Finally, the pre-composting action – whether the bedding is shallow or deep – makes achieving a good final compost blend easier.

After doing it this way for more than a year I can’t imagine raising rabbits without also having chickens. The synergy of the two species is too compelling to not take advantage of.

Have you experimented with this style of stacked functions? What has your experience been? 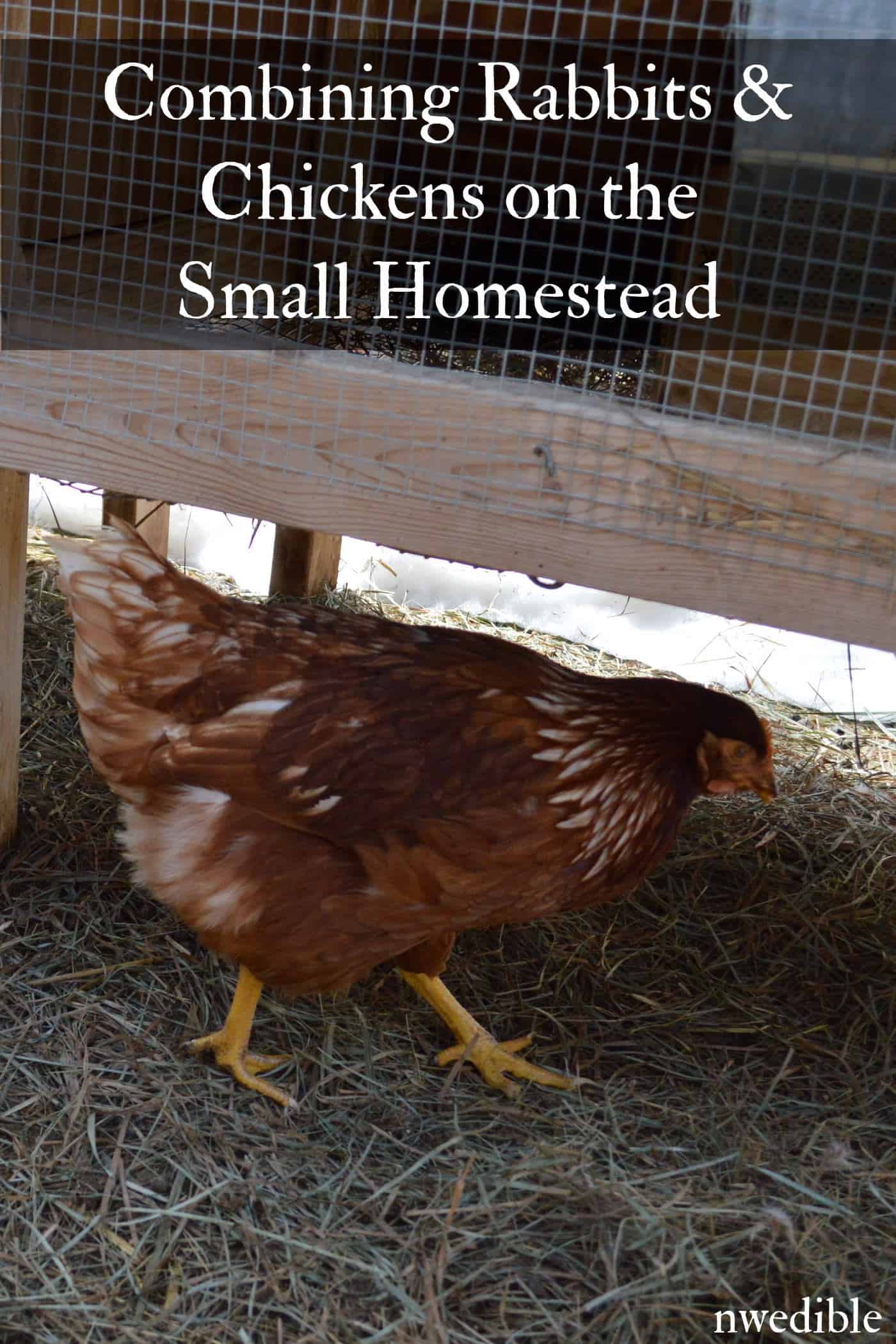 Previous Post: « 17 Homestead Rules and How I Score For Each
Next Post: 10 Self-Propogating Herbs and Flowers That Take Over My Garden Every Spring »