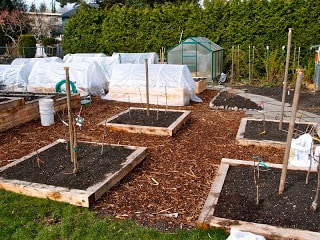 The whole idea behind the Backyard Orchard Culture method is to prune trees so that they produce an extended harvest of manageable quantities of fresh fruit rather than one really big harvest all at once. This is achieved by planting trees with different ripening times and keeping them small through aggressive but thoughtful pruning that includes annual summer pruning.
The Backyard Orchard Culture method was developed by Dave Wilson Nursery of Central California. It encompasses and encourages all manner of high-density fruit growing: hedgerow, multi-planting, combo trees, Belgium fence, espalier training and more.
Dave Wilson puts out a ton of useful info on this technique, including numerous videos showing how to plant, prune, etc. Their latest videos are of a new Backyard Orchard Culture style demonstration project. If you are interested in this style of orcharding, it is worth watching their videos. I am particularly partial to the “Part 2” Video, which discusses the initial pruning of fruit trees after planting.
Backyard Orchard Culture Demo Part 1
Backyard Orchard Culture Demo Part 2
As I talked about a few days ago, in our own backyard we have focused on the multi-planting technique and have 5 “quartets” of trees planted about 18″ apart in 5’x5′ raised beds. 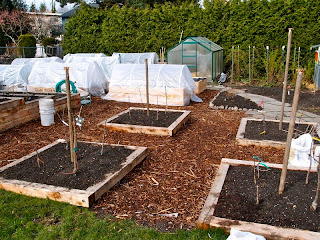 By reader request, here are the quartets I devised for my mini-orchard north of Seattle, based on staggered ripening, compatible rootstocks and other desirable characteristics like disease resistance and flavor. All but two trees were ordered from Raintree Nursery. The month following the tree variety is the expected ripening time based on the info in the Raintree catalogue.
European Plum Quartet (all trees on Mariana 2624 rootstock):
I had to make some last minute substitutions to my plum trees after Raintree sold out of the very late October ripener – Coe’s Golden Drop – I wanted, but I still managed to get a nice variety with a ripening spread of 4-6 weeks.
Imperial Epineuse – late-August. Purple prune-type.
Seneca – early-September. Large fresh-eating type.
Schoolhouse – mid-September. Yellow prune-type.
Golden Transparent – late-September. Gage type.
Sweet Cherry Quartet (all trees on Gisela 5 rootstock):
Ripening time for cherries as listed in the Raintree catalogue is vague. Early, main and late season was the best I could do. I expect these varieties represent a 6-8 week ripening spread from late June through August.
Lapin – late season
Black Gold – main season
Hudson – main season
Early Burlat – early season
Apple Quartet #1 (all trees on M26 rootstock):
Disease resistance was a huge factor in apple selection. Our existing apples, including Akane, were already filling the early to -mid-September slot for fresh eating. After we filled the rest of the “main season”fresh eating slots, we picked several other late varieties for their long-keeping qualities.
Williams Pride – early August
Sansa – late August
Honeycrisp – September – mid-October
Brown Russet – October, keeps through spring
Apple Quartet #2 (all trees on M26 rootstock and picked for disease resistance):
The apples were divided between the two quartets based on scion (fruit wood) vigor. Different varieties on identical rootstocks will show more or less growth based on the inherent vigor of the scion. We assigned the eight apple trees to their group based on the rootstock and tree spacing chart in the Raintree catalog, which shows the final size the trees will attempt to achieve on various rootstocks.
Rebella – late September – early October
Belmac – late September, keeps through winter
Liberty – early October
Karmijin de Sonnnaville – mid-October, keeps through winter
Pear Quartet (OHxF x 333 and OHxF 97):
We were not able to get these varieties on identical rootstocks, and one – Rescue as I recall – is on OHxF 97).
Ubileen – early August
Orcas – early September
Rescue – September, keeps through December
Conference – October, keeps though January
I’m very excited to see how this method of orcharding does. As always, I’ll keep you posted.
26

Previous Post: « Seed Starting 101: When You Didn't Quite Get To It – Quality Nursery Seedlings
Next Post: There's Not Going To Be An Earthquake. But If There Is… »