I’m not dogmatically anti-plastic, but I try to be thoughtful about how and where it is used in my house, and I am trying to cut down. My garden at this time of year grows under a tunnel cloche of plastic. Freezer stuff gets entombed in plastic, because it’s the best at preserving the bulk orders of pastured meats I invest in. My DIY bulk cleaners get transfered to reusable plastic spray bottles. So there’s a compromise there, and I try not to let perfect be the enemy of better when it comes to plastic use.

I couple months ago I ran out of plastic wrap, and I just haven’t bought another roll. I love opportunities like this, because I have to start thinking about how to make the kitchen work without plastic wrap.

Leftovers aren’t a problem – we have a good sized cache of those glass and reusable rigid plastic containers. The biggest struggle has been keeping my no-knead bread dough from drying out during overnight rises. Plastic wrap stretched over the bowl is perfect for the job, but I needed an alternative.

I know of people who use shower caps in place of plastic wrap for things like this, so that’s one option. I haven’t raided the toiletries tray from a hotel in a while, and I’m not eighty, so I don’t just have shower caps lying around. I’d be concerned that shower caps would be made of a non-food safe plastic anyway, but it turns out there are fake shower caps designed specifically to cover food if you like the idea. This company makes a version, and if you follow the link you will be treated to a video of the least competent plastic wrap user in the world.

I tried draping a cloth towel on top of the bowl, but that let a dryish crust form on the dough. (Crust on bread = good; crust on dough = bad.) Picking the crusty bits off wasn’t too fun and just kneading them back into the bread didn’t feel right either. I was worried there would be chucks of un-hydrated dough in the finished loaf.

I tried aluminum foil, which kept the dough a bit more moist than the towel, but felt pretty wasteful in its own right. Ever since a Facebook follower recommended using crumpled up dirty old foil to scrub pans I feel better about getting a second or third use out of the stuff, but if I don’t need to break it out in the first place, so much better!

Which brings me to what did work: a plate. Yup, an old fashioned dinner plate placed on top of the bowl effectively sealed out errant fruit flies who might be attracted to the fermentation, sealed in enough moisture to prevent the dreaded dough crust from forming and didn’t tap into any one-off consumables. After all that, the answer was in the cupboard all along. 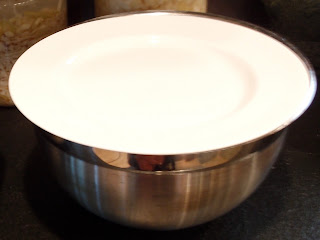 What plastic are you using in the kitchen, and what alternatives have you found?