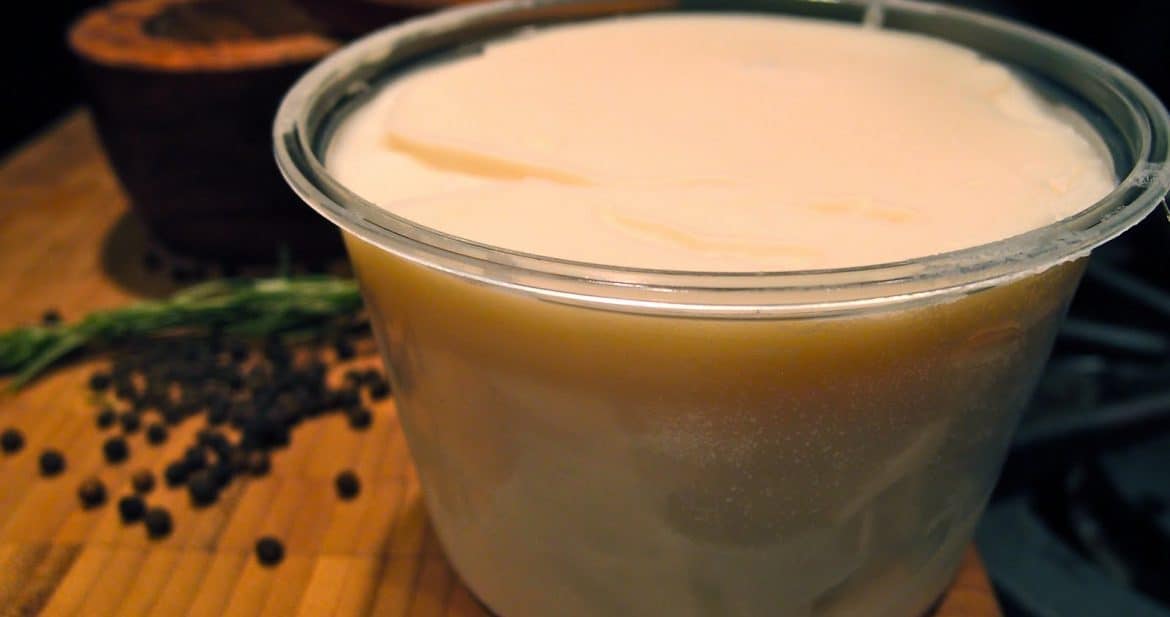 Well, I don’t usually echo Emeril Lagasse, but pork fat really does rule. I’ve known vegetarians who hot-rodded their Boca patty with bacon when they thought people weren’t looking, and any meat product that can find its way into desserts is a force to be reckoned with.

But pork fat isn’t just bacon. For as long as hogs have been kept for food, people have melted down pork fat to make lard. In some cultures, the fat of the pig was as valued as the meat.

As a culinary fat, lard is pretty unrivaled. It is a fantastic shortening for baking, adding flakiness to pie crusts and baked goods. It is excellent for high heat cooking, and I haven’t met a meat or seafood that doesn’t beautifully sear in a hot cast iron skillet coated with a little lard. In fact, I’d say once you make the leap to lard, it’s hard to go back.

I have proof. A month or so ago I gave my friend Fruit Lady a pint of lard. She’d never used it before, but she was intrigued. Yesterday she stopped by for a cup of coffee and looked me dead in the eye.

“I need you to give me more lard. Or show me how to make it, or something. I’m almost out. I can pay you, or trade, or whatever.”

Now, I render pork fatback 5 pounds at a time for cooking lard, so I’m happy to give a little away to my friends (especially friends who routinely drop off canned Asian pears or pineapple syrup they’ve put up) but as it happens, I was on my own last pint of lard. Being a pork fat junkie myself, I kept my last tub but invited Fruit Lady to come render my next batch with me and share in the spoils.

Here’s how I feed my pork fat habit.

Lard can be made from three grades of pork fat. The highest grade, leaf lard, comes from around the hog’s kidneys. This fat is the mildest in flavor and is preferred for baking (people not wanting a vague porky quality to infiltrate their pie crust, I suppose). It is hard and white. The next grade is called fatback. It comes, as you might imagine, from the back of the pig, just under the skin. It is slightly softer than leaf lard but still hard, and is a creamy color. The lowest grade of fat for rendering lard is called caul fat and comes from around the interior organs of the pig. Caul fat is great for wrapping lean cuts of meat or pate before cooking, but it doesn’t make a nice, firm finished lard.
I have rendered both leaf lard and fatback, and have found them both excellent for my everyday-cooking uses. Fatback is a bit cheaper and easier to come by, so that’s what I use now.
Here’s what 5 pounds of previously frozen pork fatback looks like. 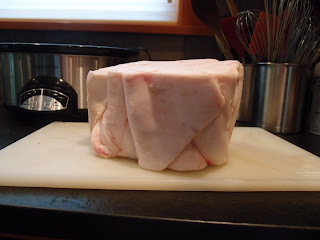 And here are the pieces of fat separated. 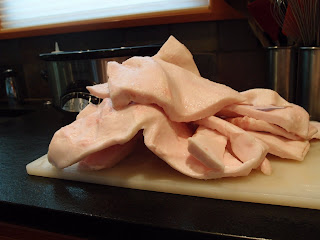 Start by dicing the fat into medium-sized cubes. This is the most tedious part of the whole process. Five pounds of slippery fat is a lot to dice – have your steel handy to frequently hone your knife edge and clean it of fat. Or, do what my friend does and rough chop it and throw it in the food processor. I haven’t personally tried that, but my friend tells me it works great. 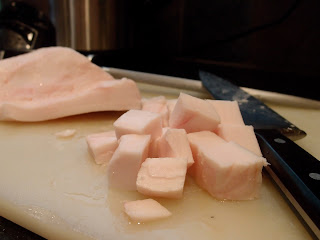 Cram all the diced pork fat into your Crock Pot. You do have a crock pot, right? If not, here’s some non-crockpot options for you. Add a cup or two of water to your crock pot, put the lid on, and turn it to a long-and-low setting. My goal in this is to render out the maximum amount of fat from the fatback at the lowest temperature possible. I have found that high temperatures can brown the fat too quickly, leaving too much unrendered lard in the fatback and imparting a cooked meat flavor to the lard I do not want. 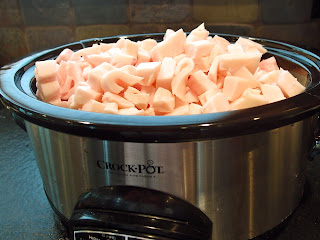 After awhile everything will get bubbly. That’s fine. Fat and water together getting hot leads to splattering. Consider yourself warned. Long sleeves are your friend. Every 30 minutes or so, or when it looks like it needs it, give the fat a gentle stir. 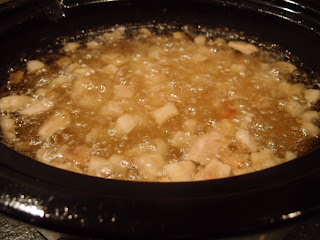 When the diced fat – called cracklins – is brown and has sunk to the bottom and shrunk in size I call my lard done. This usually takes 4 or 5 hours for me but I suspect it will depend greatly on how hot your crock pot gets and how hard you work to render every last drop of lard. 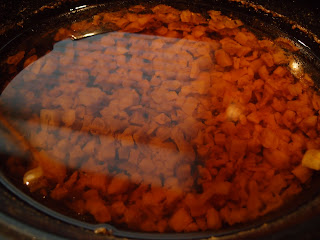 Strain out any bits. I like to do a second straining through the same colander, lined with a lint-free towel or paper towel, just to catch any fine particulate. 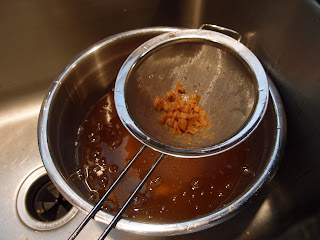 Pour into storage containers. This is plastic – bad me! But wide mouth glass Mason jars work great too. The lard can be kept in the fridge for at least a month, and in the freezer for at least six months if it is properly wrapped and sealed against freezer miasmas. 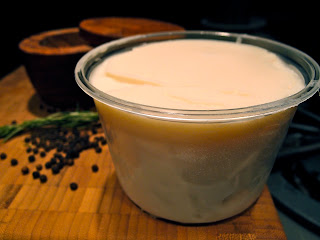 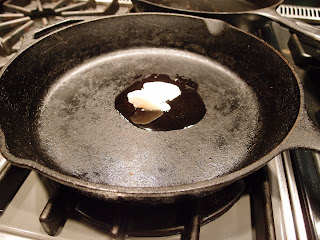 Do you cook with lard? How do you use it?