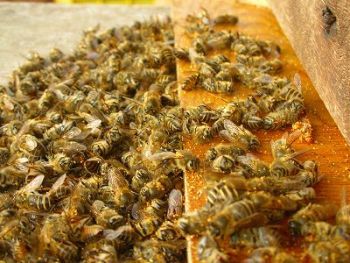 Last month, noted seed and biotech company Monsanto announced the purchase of Beelogics, a company with a product in trial that may help prevent colony collapse disorder in bees.* In related news, Monsanto has successfully built bee DNA into insect-pollinated crops through genetic engineering. Though the technology is currently being trialed on a limited 3,000 acre planting of modified RoundUp Ready Soybeans called “SoyBee’ns”, scientists are pleased with the success.^

According to Stuard Mansonite, Monsanto Chief Biotech Engineer and Product Developer for the SoyBee’n project, about 94% of the “genetically enhanced” soy plants set flower within a 2-hour window. Shortly after flowering, the blossoms detatch from the SoyBee’n plant and take flight. When they encounter another blossom, they exchange pollen.

This exchange may happen 12-20 times before the blossom returns to its mother SoyBee’n plant to grow into a traditional-looking soybean pod. Mansonite described the mid-air pollination dance of the blossoms as “breathtaking.”

Bean set within the SoyBee’n pods is sporadic and in 20% of cases results in fuzzy, yellow and black striped beans, but Mansonite is confident that traditional breeding techniques will be able to “work the kinks out” of the SoyBee’n product before it goes to the commercial seed market, where it is expected to sell for 9 times to price of conventional soy seed.

Soy is the first such crop to have bee DNA embedded into it; but SoyBee’n engineers are already hard at work introducing this technology to other insect-pollinated crops, such as zucchini, apples, broccoli, peppers, watermelon, cashews and more.

Although some consumer groups have voiced concern about the proliferation of GMO food products, Monsanto and the Soy Lobby have fought any effort to label genetically modified soy. In legal documents, Monsanto stated, “no substantial difference exists between conventional soya seed and SoyBee’n seed. Labeling such as plaintiff suggests would only serve to confuse the buying public and hurt the competitiveness of a U.S. jobs creator.”

Vegetarian and vegan groups have banded together to condemn SoyBee’n technology, arguing that widespread adoptation of the technology will likely mean protein deficiency for that segment of the world’s population who will not consume meat, including bees, on ethical grounds. When asked to comment, Media Rep Carthillman said, “at this time, we estimate that 70% the SoyBee’n product will be fed to cattle anyway, so vegetarians are probably in the clear.”

“Someone better tell those bee allergy people to cut back on soy milk for awhile, though,” she added, laughing.