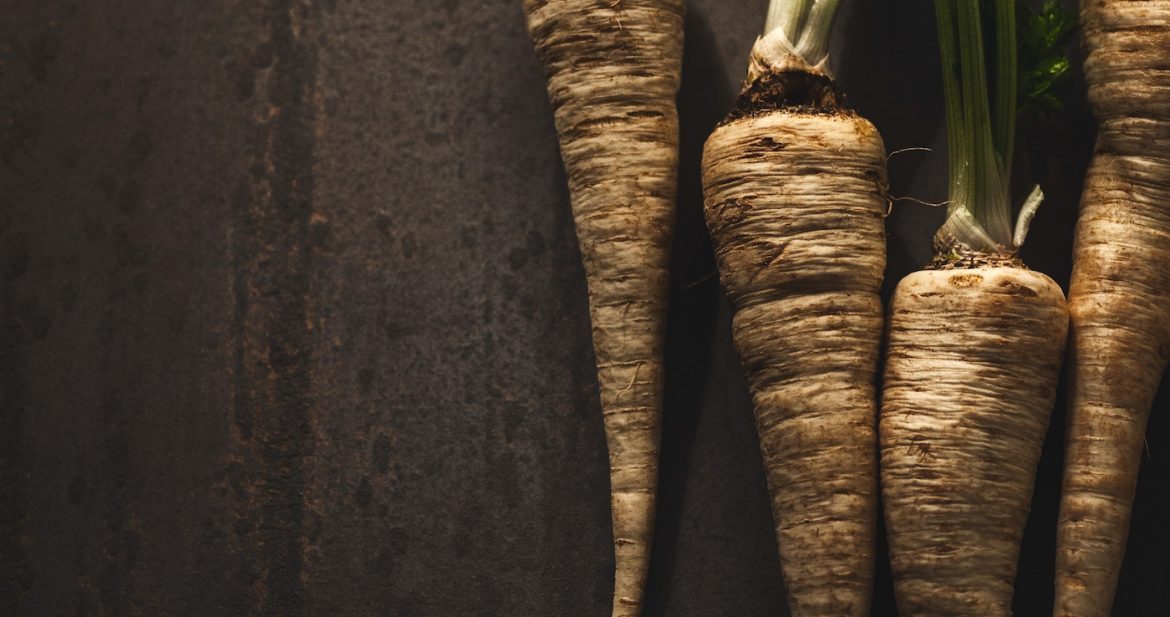 It’s early January and after that list of harvest-ables what am I actually harvesting?

Still a row of Bulls Blood standing.  The tops are all sad and little, but the roots have put on a bit of size.  Most are around golf ball size, with some a fair bit larger.  I got a little panicked and harvested most of the winter beets before the Thanksgiving cold snap.  I wasn’t sure how well they’d come through frozen ground.  Well, I needn’t have worried.  The beets I left in ground are fine and even put on size through the cold.  Somehow we did manage to eat the glut of late November beets, though.  Certainly none went to waste.

We have a quarter-bed of each left.  The tops have died down but the roots made it through the cold without flinching.  I didn’t net this bed and I should have; I’m seeing mild root maggot damage on the carrots. I’d say perhaps 25% loss.

Turnips are only being enjoyed as pickles now (they excellent as a lacto-fermented pickle) but I am still flush with ‘bagas.  Thank goodness, I love those silly roots!  My friend Shoreline Fruit Lady loves rutabagas too.  (She’s Norweigian – as a rule the Scandinavians appreciate rutabagas more than most, which is why the roots are sometimes called Swedes.)  Shoreline Fruit Lady invented a rutabaga fritter that was so good I stole the idea and served my own ‘Baga Fritters at Thanksgiving.

Every time I see these for sale for $8/lb. at the market while I’m picking up milk I vow to go dig mine up and do something with them.  I simultaneously shake my head that anyone would pay that much money for what is, essentially, a tasty invasive weed.  In any event, I have plenty of chokes just waiting underground for me to find some inspiration, get and moxie and harvest them.

Still have a half bag of Yukon Gold’s left, and they are starting to sprout a bit so it’s time to use them.  I won’t reuse them as seed stock, I’ll buy new virus free stock to help keep disease buildup in the soil to a minimum.  Potatoes were so worthwhile, I can’t believe it took me so long to try them!  This year as a space saving/yield maximizing experiment I’ll be growing several varieties in huge grain sacks Nick gets with his homebrew ingredient purchases.

Kale is growing slowly, though it still looks a bit rangy from the cold snaps.  There are baby leafs starting to grow at the junction where old leaves were picked.  I suspect we’ll get a few more good pickings from the Cavallo Nero, Red Russian and Scotch Curled before the kale shoots start popping up.  And then – yum! – Kale shoots.  Wish I had grown collards last fall but it just didn’t happen.

The sprouts are still standing tall.  I have at least two big pickings left on the 5 plants.

A single January King is left, and then it’s no more cabbage until the earlies come in.  So sad!  This January King has been a triumph, I will definitely grow it again this fall.

Last summer’s sprouting broccoli isn’t making florets for me yet but by late January I’ll be checking the plants frequently.

Afew leaves are regrowing, but for the most part the Chard was wiped out.  It made it through the Thanksgiving cold snap because we cloched the bed, but winter winds blew the cloche off just before the second early January freeze and that was all she wrote.  I am glad I took the time to pick, blanche and freeze chard in late summer.  It reheats from frozen beautifully!

Our winter leeks are still standing.  We’d be harvesting them more except they are almost impossible to dig up.  Leeks are supposed to be shallow rooted, like all alliums, but thuse suckers put roots a foot down into one of our soggier, clay-ier beds, and honestly it’s a challenge to dig them without breaking them.  When I do get them out of the soil intact, I react like I’m young Arthur pulling the sword from the stone, and they are so delicious as to make the effort with the full sized shovel in the drizzle worthwhile. But next year I will grow them on looser soil.

The lettuce in the greenhouse is just ok.  It’s succumbing to some mold issues and it’s not really sizing up yet.  I think once the days get a little longer the lettuce and winter endive currently planted in there will “pop” and provide a few good pickings.

I have about half my winter squash left.  The delicata went fast, I’ll grow more of that next year.  The Waltham’s Butternut was so prolific I’ve used them like crazy, given away several squashes and still have 8 or 9 in storage.  They are keeping beautifully in the garage. There’s also an enormous Blue Hubbard that I need to deal with because it’s getting squishy on one end (not a good sign), a half-dozen or so acorn squashes and our lone small sugar pumpkin.

Previous Post: « Lessons From A Year Without Summer
Next Post: Yogurt Making: How To Add Some Culture To Your Day »